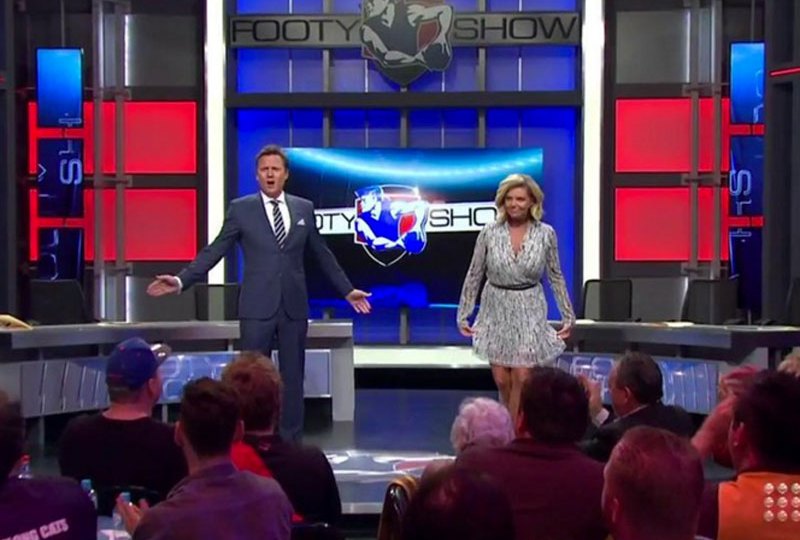 Channel Nine has ceased production of the Footy Show after 25 years on air. Photo: Getty

Channel Nine has revealed its shock decision to axe The Footy Show, just two months after the iconic program underwent a major facelift ahead of this year’s season.

After Thursday night’s show went to air, Nine announced it will end production of its flagship AFL program after 25 years and 735 episodes.

The plug was pulled after last week’s dramatic plunge in ratings when just 53,000 viewers tuned in to watch the revamped panel.

A decade ago, The Footy Show, which has been dubbed Australia’s longest-running sports entertainment program, attracted audiences above 480,000 in Melbourne.

“It is with regret that The Footy Show will no longer be produced. It has been a tough decision to end the program that has been such a trailblazer, but sadly the new show has not captured audiences in the way we had hoped,” Nine’s Melbourne managing director, Matt Scriven, said in a statement.

The dramatic decision appeared to blindside the show’s hosts, who told fans at the end of Thursday’s show, “We’ll see you next week”.

‘I want to thank the current hosts, Anthony Lehmann, Neroli Meadows, Dylan Alcott, Brendan Fevola and Shane Crawford, the former hosts of The Footy Show, and the hard-working crew for their great contribution,” Mr Scriven said.

“Over the past three decades Nine has led the way with AFL entertainment and news programs and we will continue to do so, with the production of the award-winning Footy Classified and the Sunday Footy Show.

“We remain committed to the AFL and creating great AFL content, and we will continue to focus on new ways to engage audiences who love the code.”

The show’s gradual demise started in early 2016 when it was
sensationally revealed that then-host Garry Lyon had begun an affair with Nicky Brownless, the wife of his close mate and The Footy Show regular Billy Brownless.

Lyon announced his resignation immediately after the affair was publicly revealed.

Shortly after, James Brayshaw left his role after 11 years as co-host of The Footy Show, to “get better at being a dad and a partner” he told Fairfax Media.

The embattled program tried a revamp with former Seven reporter Rebecca Maddern as co-host, partly to win back a female audience that had slowly deserted the show.

Controversies involving the behavior of Sam Newman, 73, who left the show at the end of its 2018 season, were cited as reasons for women fans turning off.

In 2008, Newman was slammed for a skit involving a scantily-clad mannequin adorned with a picture of football writer and commentator Caroline Wilson.

That year, the Australian Communications and Media Authority found that Newman had breached television’s code of conduct.

“I’ve probably been the most criticized … person in the media in Australia for probably two decades … I wouldn’t have it any other way because you are what you are,” Newman said in his farewell message.

In the end, The Footy Show couldn’t compete with Channel Seven’s rival Thursday night sports show The Front Bar, which was reportedly the key reason for its ratings drop.