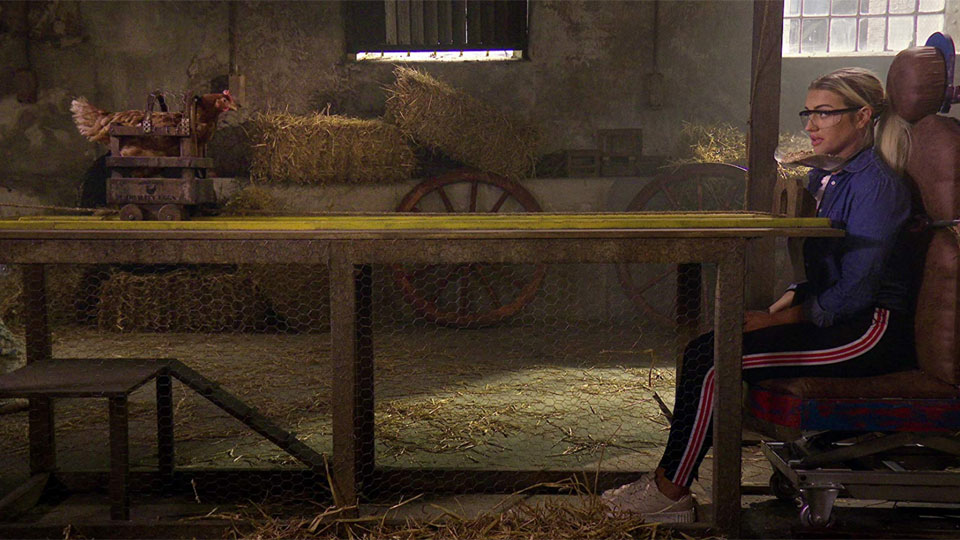 Fun or torture? A Flinch contestant is threatened with a hen. Photo: Netflix

Netflix has unveiled its first original game show, Flinch, but disturbed viewers are less than impressed with its torture-as-entertainment formula.

Less than a week after its May 3 launch, “disgusting” Flinch has drawn an overwhelmingly negative response on mainstream and social media.

Complaints have compared it to everything from barely disguised sadism to an “evil Saw movie come to life”.

The concept is basic. “Brave and foolish contestants” – Netflix’s description – are put in stressful situations, then punished if they react.

Says judge Desiree Burch in the Flinch trailer, “This is psychotic”.

Rancid meat crawling with maggots is shoved in their faces and klaxon horns let off beside them. A flinch sees them strapped to medieval devices and their heads dunked in water or get electric shocks.

As they scream, judges and fellow contestants fall about laughing.

“Hope you also got waterboarding on the show,” said another.

Watching this show "Flinch" on Netflix and its basically televised torture

Many fans took to Twitter to compare Flinch to another Netflix show, dystopian science-fiction series Black Mirror, which has included storylines about reality TV and punishment.

“You guys are taking Black Mirror too literally,” tweeted one viewer.

“Please tell me this is not the direction Netflix is going in,” wrote another.

“You have so much more quality at your disposal. Must you really turn to the cheapest form of entertainment?”

Said another, “This is disgusting.”

Is this a show inside of a black mirror episode?

When one Twitter user said of Flinch, “I think that’s called torture,” the streaming giant hit back, arguing contestants signed up to be on the show.

Netflix did not respond to a request for comment by The New Daily.

Filmed at a farm in Northern Ireland and produced by UK company Stellify Media, Flinch initially looks hokey rather than sinister.

Its opening music is reminiscent of a barn dance and indeed the action takes place in a barn, complete with hay bales.

The eight contestants – actors, beauticians, students – are dressed in denim overalls as if they’re mucking out the stables before going to the weekly hoedown. Even the blindfolds used on contestants are burlap.

The juxtaposition between rusticity and pain is unsettling.

In episode one, the competitors had balloons shot off them by a marksman with a paint gun. If they flinched, they were shocked.

In a different episode, anyone who jumped when a toy clown popped out of a giant jack-in-the-box got the favourite shock treatment.

Another contest saw people stick their heads in a wire cage with a piece of cheese in front of their face. A rat was released into the cage. Anyone who moved had mouse traps snap on their fingers.

For many Netflix watchers a sticking point is the creation of Flinch at a time when fan favourite shows Santa Clarita Diet and One Day at a Time have been axed.

“Every day we stray further and further from God’s light,” one philosophical Twitter user remarked.

Hey @netflix My husband and I just watched the trailer of “Flinch” and you just lost two subscribers. I am not supporting “torture as entertainment”- what a repulsive concept- with my dollars. TOTAL FAIL. ☹️😡

For critics, the biggest questions about Flinch are what and who it is for. Asked one UK review, “Why does it simultaneously feel like the longest and shortest television program ever made?”

Not made clear is whether the contestants profit from their participation. There does not appear to be prizes.

Flinch isn’t helped by its judges Burch, Lloyd Griffith and Seann Walsh. All described as comedians, the trio is not just unlikeable but puerile bullies.

“Looks like he’s gonna cry!” exults Walsh at one contestant’s distress when jabbed with a cattle prod during a challenge.

“Look at his stupid stupid face!”

At the end of every episode the judge whose arbitrarily selected contestants have flinched most are forced into a torture challenge of their own.

Despite its critics, the show has found fans who think it’s just straight-up silly fun.

Is it bad I love Flinch in Netflix. Seeing people cause themselves pain is funny

This gameshow Flinch on Netflix is like Cute Fear Factor and I am here for it.

If you haven't seen #flinch on @netflix yet, go have yourself a laugh. I swear I'm laughing so hard I'm crying.

‘This is psychotic’: Netflix slammed over shocking new show Flinch