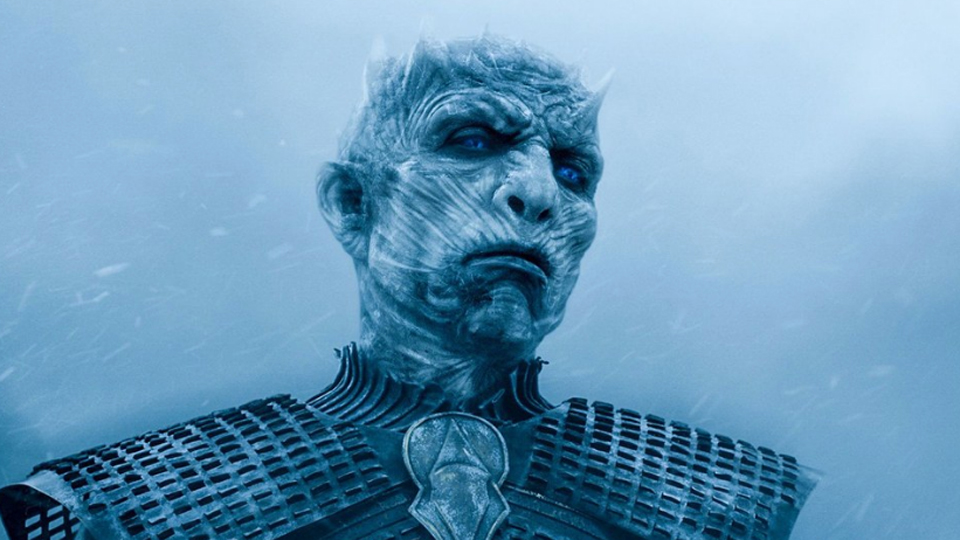 And that's a final goodnight to the Night King on Game of Thrones. Photo: HBO

WARNING: THIS STORY CONTAINS SPOILERS FOR EPISODE THREE OF GAME OF THRONES, SEASON 8

What do we say to the god of Death? Definitely not today.

The massively-hyped third episode of Game of Thrones promised a cataclysmic battle between the living and the not, and it delivered.

But amid the gore and desperation and palpable panic generated by the undead, small human moments were the most memorable.

Tyrion kissing Sansa’s hand as they looked at each other while wights invaded the Winterfell crypt. Steely Daenerys weeping over a fallen body. Sandor ‘The Hound’ Clegane finding the will to live to protect the one person he loves.

The last time an HBO series episode generated such speculation and excitement/dread was The Sopranos finale.

And I half expected HBO’s depiction of the battle for Winterfell to begin with Jaime at the head of the fortress defenders, glowering across a snowdrift at the undead legions, then staring deeply into Brienne’s eyes as if for the last time.

Meanwhile the screen fades to black against a backing track of Journey’s Open Arms.

If the screen had faded to black that easily could have passed for CNN live coverage from the battle.

Much of the actual fighting was an indistinguishable blur, a device that lent a hideous dreamlike quality but also saw frustrated fans squinting at their screens to see who was cleaving whom amid all the darkness.

On balance, it also lacked the brutal impact of the Battle of the Bastards.

With zombies as the baddies, the action was more cartoonish and harder to invest in emotionally. And what was with the plain stupid battle tactics from the Winterfell crew? 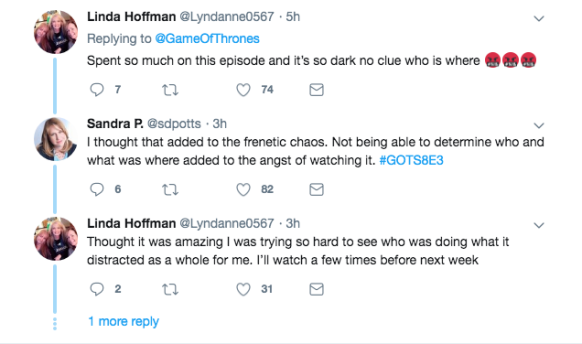 That said, the all-enveloping darkness gave the first act of the episode its most vivid moment, as a troop of Dothraki, curved swords ablaze, galloped off into the night to engage the wights.

Their fate was depicted through terrifying understatement as those lining the battlements heard war cries silenced and saw torches extinguished one by one.

Aside from clear visuals, this episode had everything: Walls stormed, dragon dogfights, heroic sacrifices, the most valiant losing their nerve, the most meek hurling themselves bravely into the fray.

But mostly, this episode had Arya.

After stealing the show in episode two with a nude scene, she did it again by dispatching the Night King with a thrust of her Valyrian steel blade.

It was a dramatic high point but arguably also a low one. Really? That’s all it took to topple the feared king of the undead, his army and dragon?

Still, fans loved it. Twitter erupted in a way not seen since, well, last week when Arya stripped off to snuggle with Gendry.

Arya Of House Stark. First of her name. Avenger Of the Red Wedding. Assassin of the North. Knight King Slayer. Savior of the Seven Kingdoms.#GameofThrones #BattleOfWinterfell pic.twitter.com/EBZiZYhDu9

“A girl needs to run for office,” said one user.

Viewers had expected casualties, and they got them.

Eddison Tollett saved Samwell Tarly but was stabbed through the back for his efforts. Lyanna Mormont went down fighting like a wolverine, bringing down an undead giant as her last act. 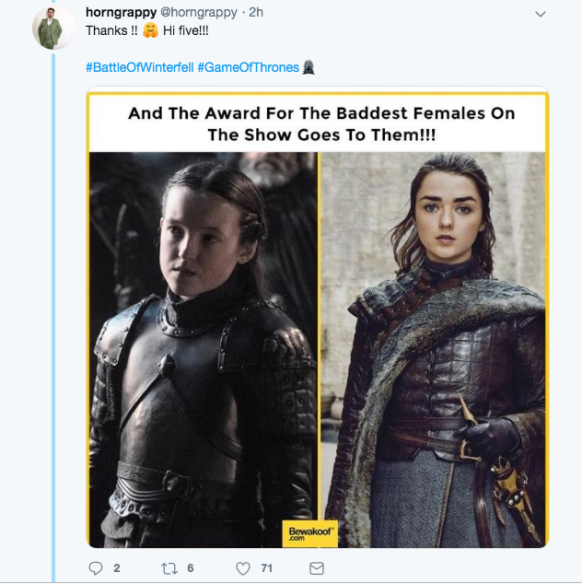 And freshly reappeared Melisandre, in an act that illustrated her entire unfathomable storyline, collapsed outside the Winterfell gates as hostilities ended, signalling the end of the Great War.

On his victory at Waterloo, the Duke of Wellington wrote, “Nothing except a battle lost can be half so melancholy as a battle won.”

So for the winners there was melancholy indeed as they counted the cost of their victory – also a tinge of melancholy for viewers who might be forgiven for thinking ‘What now?’ with the threat of an undead army extinguished and three more episodes to run.

But mostly there was awe at Arya.

I’ve noted before that the Game of Thrones creators sometimes appear to cross-reference Joss Whedon’s work (Buffy the Vampire Slayer, Firefly, The Avengers) in their scripts.

The feeling of exhilaration as a tiny girl tore into the Night King recalled for me River Tam (Summer Glau) methodically and single-handedly annihilating a troop of cannibalistic Reavers in 2005’s Serenity.

We’ve been wondering whether it will be Daenerys or Jon who ascends to the Iron Throne.

As for what happens next, the action is due to move to a human v human smackdown.

In betraying the alliance, Cersei said it herself: She chose violence. And with the allied commanders handily surviving the Night King’s assault largely intact, it appears she’ll get it in spades.