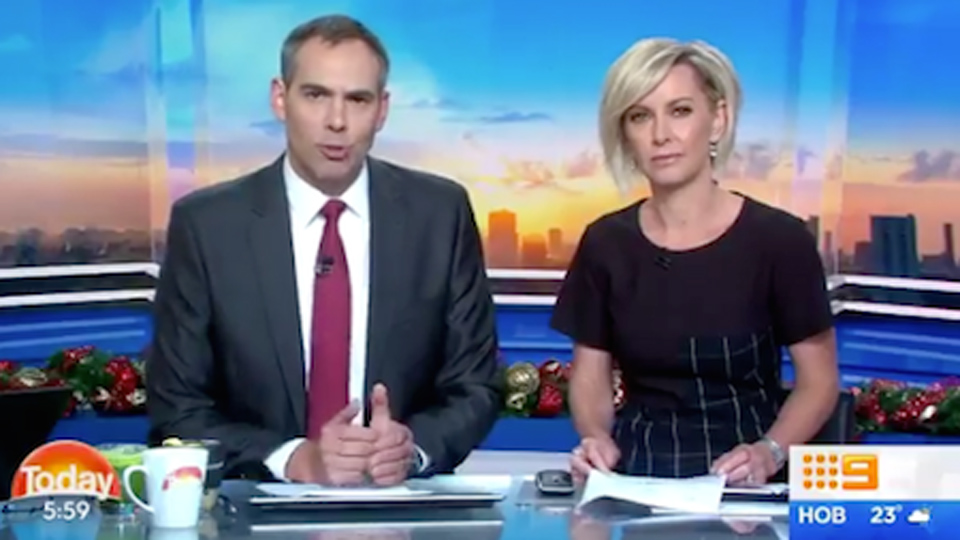 Nine’s Today show was forced to eat humble pie on Monday over a false on-air report that retailer Coles had run out of turkeys 10 days before Christmas.

Given turkey is reportedly Coles’ second top-selling festive fare, ahead of prawns, the supermarket giant clearly didn’t see the false claim as paltry.

Host Deborah Knight was handed the awkward duty of making a fulsome apology to Coles during the breakfast show, admitting claims made on the weekend’s edition were false.

“Yesterday we wrongly reported that Coles has run out of turkeys,” Knight told viewers just before 6am.

Knight’s co-host Brenton Ragless – standing in for Karl Stefanovic for the first three weeks of his summer leave – then took up the apology baton.

“Thankfully we’ve been informed by Coles that the information wasn’t correct and Coles assured us they have a steady supply of turkeys right across the country,'” Ragless said.

“If you’re thinking of having one on your table for Christmas lunch this year, you needn’t worry.

“There are plenty of turkeys to be had.”

As to turkeys, a Nine spokesperson told The New Daily the claim Coles had run out of the Christmas staple “was a producing error”.

Said the spokesperson, “We have made an apology on air and also on social media, which says we made an error and we apologise.”

Yesterday we wrongly reported that @Coles had run out of turkeys. Well don't worry folks, They've assured us they have a steady supply of turkeys across the country so your Christmas lunch doesn't have to go without! #9Today pic.twitter.com/uK5HQXkH90

Coles refused to talk turkey with The New Daily when contacted.

“As a listed entity we don’t discuss trading outside of our results announcements each quarter,” said a spokesperson when asked about the impact the incorrect report would have had on Coles’ sales in the vital lead-up to Christmas.

Coles also wouldn’t say how many turkeys it sells during the festive season. According to an Insights Report, competitor Woolworths sells 400,000 kilos of fresh turkey each year.

Coles spends “probably between 10 and 12 million dollars on advertising with Nine a year”, according to a sales executive at a commercial TV network.

“They would have been furious. Ropeable.

“People for sure would have seen the report, believed Coles had run out of turkeys and taken themselves off to Woolies instead.”

Meanwhile, Today’s Georgie Gardner – Knight is keeping her chair warm during non-ratings period – was drawn into the public campaign being waged against Stefanovic by his ex-wife.

In an interview with New Idea magazine, former journalist Ms Thorburn suggested Gardner was paid off by Nine to keep silent after this year’s ‘Ubergate’ scandal.

In March, Stefanovic and his brother Peter were overheard complaining about Nine colleagues, including Gardner, who Karl reportedly said “sat on the fence” and didn’t have enough opinions.

“This was her opportunity to stand up for women,” Thorburn said.

“I guess they threw extra money at her. She got to sell (her house) six months after Ubergate and buy a better house. There you go.”