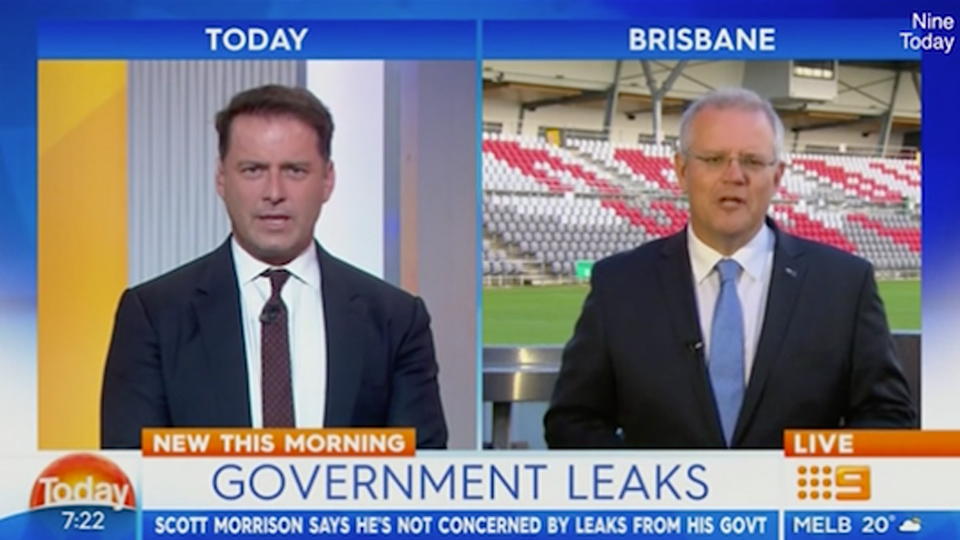 "Grab the Selleys and plug the leaks", Karl Stefanovic told Scott Morrison on the Today show on Wednesday. Photo: Twitter

On his first day of breakfast TV interviews since becoming prime minister, Scott Morrison came out swinging at Karl Stefanovic over his turbulent life.

On the Today show on Wednesday, co-host Stefanovic told Mr Morrison he had “little or no control” over his Liberal Party colleagues after Malcolm Turnbull’s political execution last week.

The exchange came on the heels of Mr Morrison’s surprise announcement that the Coalition would reverse its pension policy and keep the retirement age at 67, not increase it to 70.

Earlier, he had coasted through a more gentle interview on Seven’s Sunrise where he said “the curtain has come down on The Muppet Show”.

But Stefanovic – out for blood or ratings – took a different tack.

Mr Morrison responded in diplomatic fashion: “I know that. The curtain has come down on that.”

He then talked up putting his ministry in place “in record time” and getting onto the “business of government” immediately.

“Grab the Selleys and plug the leaks and you might have a chance. There is a leak every day,” he instructed Mr Morrison.

“If you can’t control the leaks you might as well be captain of the Titanic.”

Pressed, Mr Morrison eventually clapped back, describing the suggestion he’s not captain of a seaworthy ship as “rubbish.”

Then, smiling, he made an apparent sly reference to Stefanovic’s much-publicised personal life.

“Karl, you’ve been through some torrid events in your career and look at you,” Mr Morrison said.

“You are Australia’s hero. You get over these things. You move past them.”

The Nine star, who told TV Week in July he has considered quitting his spotlit job, has been in the gun this year over Today’s falling ratings.

With its smallest audiences in four years, the show is lagging behind Seven rival Sunrise.

His network’s highest-paid star, Stefanovic has drawn negative publicity and divided audiences after splitting in 2016 with his journalist wife Cassandra Thorburn after 21 years of marriage.

He will reportedly marry shoe designer Jasmine Yarbrough in December.

🌸Always by my side 🌸

Stefanovic was also embarrassed when a private conversation he had with brother Peter Stefanovic in an Uber was made public earlier this year.

With all that in mind, Stefanovic made a puffing noise and acknowledged he would “take that” unsolicited gee-up from the prime minister.

Encouraged, Mr Morrison – either being sycophantic, sarcastic or faux jovial – added he would “take inspiration” from him.

“Don’t take anything from me my friend,” Stefanovic said.

“Just go on and lead this country.”

Mr Morrison insisted he was doing that, saying that despite the third leak from his party this week he is in control.

He told Today he is not “fussed” about the latest leak, which revealed pre-election plans to fast track $3.6 billion worth of company tax cuts for small and medium businesses.

“The prime minister is interested in actually cutting taxes for small and medium businesses. What are they going to predict next, the dawn?”