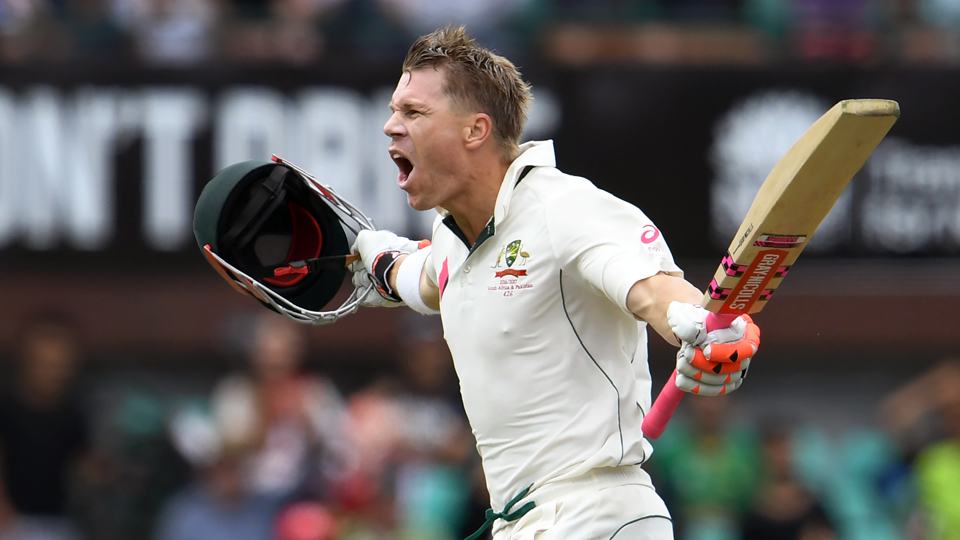 So Channel Nine has swung David Warner into the line-up for its one-day commentary team.

What next? Perhaps Barnaby Joyce will chip in with pitch reports.

Given Warner’s central role in March’s ball-tampering scandal, the decision to hire him for an on-camera role smacks of rewarding a player who has only become available to comment because he is banned from doing much else.

Warner won’t be on the field, but he’ll still be profiting from the game he brought into disrepute.

When it was announced the former Australian vice-captain will feature in Nine’s coverage of the second one-day international against England in Cardiff on Saturday, the network drew criticism.

Nine’s stars fell over themselves to defend the decision.

“[Warner] has been banned from playing cricket. But is he banned from earning money? He has a family,” Today’s sports presenter Tim Gilbert said.

He does – but he also had that family when he made his terrible judgment calls in South Africa. And I’m tipping he’s not quite down to his last $500,000 just yet.

Karl Stefanovic saw it as an “astounding” appointment.

“I can’t wait to hear from him,” said the Today host, spinning it as a chance for Warner’s new commentary co-workers to “ask him questions about what happened”.

You know what, Karl? Warner had the chance to answer those questions at his disastrous press conference three months ago and all we got was silence and parroted phrases.

Is the Nine camp, via Stefanovic, now suggesting that – surprise – all it took for Warner to talk was to throw a bit of money at him?

If so, they’ve proved right all the cynics who said the former opener and vice-captain would eventually find a path to selling his story somewhere.

It would be a way for Nine to sneak Warner in the back door and for both parties to avoid the negative publicity generated by Barnaby and Vikki Campion over their recent tell-all on Channel Seven.

Of course, Nine doesn’t see it like that. It told The New Daily in April that Warner was already on the books, so it seems it has been waiting for the opportunity for moral outrage to die down before trotting him out.

The kindest view is this seems more an attempt to commence the public rehabilitation of the explosive left-hander. If he is being paid outside that arrangement, it adds a whiff of distaste to an already unpalatable situation.

My first memory of cricket is Richie Benaud’s informed, respectful and measured observations during the 1977 Centenary Test.

He meshed sophistication with a lack of pretension, the polar opposite of what Warner seems to exemplify.

Richie’s golden rules for commentating included avoiding clichés and banalities, putting your brain into gear before opening your mouth and understanding there are no teams in the world called ‘we’ or ‘they’.

I wonder how many Benaud rules Warner will get right – or why he’s been chosen by Nine ahead of more articulate, genuine, admired talent.

His past media performances haven’t impressed. His TV commercials were wooden and, like Shane Warne, it’s likely he’s going to have trouble controlling his fierce jingoism.

Warne gets away with it because he’s a natural raconteur. Warner is far from it.

The judgment call from the network’s decision makers to install Warner as a trusted voice in the commentary box isn’t entirely surprising.

It’s their last roll of the dice and appears to be a desperate grab for publicity ahead of the first summer in 40 years where Nine has no cricket scheduled.

The announcement he’ll be commentating has already generated buzz for a series that would otherwise carry zero interest or relevance for all but the most-diehard of fans.

Maybe it’s Nine’s intention to go out with a bang rather than a whimper.

Warner will get the chance to reignite his cricketing career, and more power to him.

It’s what he’s dazzlingly world class at, and he deserves a second chance. Just not like this, in a way that suggests there are spotlit rewards for dishonesty and cheating.