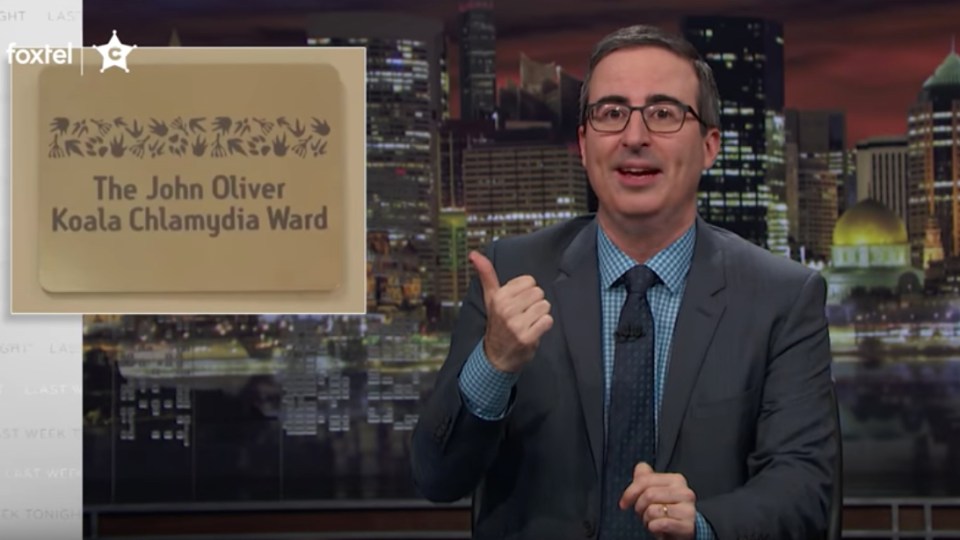 Comedian John Oliver has declared he is “done” with hosting his late-night show Last Week Tonight, after Russell Crowe bought a koala hospital ward in his name.

Last month, Oliver spent $8540 on a jockstrap worn by Crowe and a number of other items at his “Art of Divorce” memorabilia auction.

The Australian actor thanked Oliver for his “wonderful act of kindness” in a tweet on April 17, promising the money was going to be spent on “something special”.

This week, Crowe revealed that special something to be a donation to the Australia Zoo to create “The John Oliver Chlamydia Ward” with the help of the Irwin family.

Terri, Bindi and Robert Irwin thanked Oliver for his purchases claiming his actions were “helping in the fight (against) chlamydia”.

“A plaque has been organised in your honour,” Robert said as the family revealed the joke.

Oliver responded to the video on Monday’s episode of Last Week Tonight, saying “that may be the greatest thing I have ever seen!” as he pointed to the plaque.

He said the honour was the culmination of his television career.

“I’m going to be completely honest, back when this show started I wrote down my one and only goal for it and I put it in this envelope,” Oliver said showing a red placard.

“It was a simple goal it was just three words long, that goal … a koala chlamydia ward.

“What I’m saying here is, we have accomplished everything we set out to do on this show, so we are f–––ing done here,” he said as he packed up his desk.

According to the Australian Zoo, the koala population has been ravaged by chlamydia, which causes blindness and infertility as a result of the disease.

In some parts of Australia, koala infection rates are as high as 90 per cent.

The Australian Zoo Wildlife Hospital is working to find long-term solutions to to koala chlamydiosis with research programs with various national universities to find a vaccine.