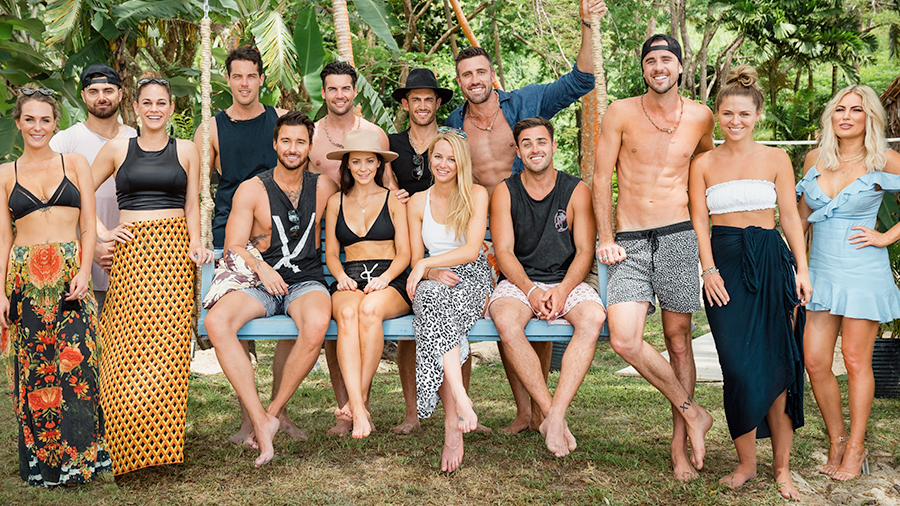 All of these people are "here for the right reasons", they swear. Photo: Network Ten
review

Unlucky-in-love 20-somethings with emotional baggage and a penchant for concocted drama. Get used to them, because they may be the key to the survival of Australian free-to-air television.

Thanks to the runaway success of Nine’s Married at First Sight, the major networks are left trying to emulate its addictive format of putting sexually frustrated strangers together in a specific location for prolonged forced contact.

What we’re left with is Sunday night’s premiere of Channel Ten’s new series Bachelor in Paradise – one hour of sweaty, snarky sexual tension.

Set in Fiji, it’s an elaboration on the popular Bachelor and Bachelorette format that sees cast-offs and rejects from previous seasons dumped together on a tropical island to do as they please. Like Schoolies for grown-ups.

I say things like this on TV because Logies don’t win themselves #BachelorInParadiseAU pic.twitter.com/x6zdGsAuKC

But this time, rather than 24 men competing for one woman or vice versa, it’s 24 people competing for each other – a veritable dumpster fire of attention-seeking desperation.

The men and women take turns doling out the roses on a set that looks like the outdoor furniture section of a Domayne catalogue and saying things like “She’s a gorgeous girl”, “There’s definitely a spark” and “If it’s meant to be it will be”, while eyeing each other off with the ferocity and focus of meat traders hungry for a bargain.

There’s the requisite alcohol, of course, and the contrived date nights, but this time with added Fijian dancers. What’s interesting is the casting decisions – a mixture of seasoned villains (Keira, Blake, Leah, Laurina), popular kids (Tara, Florence, Jake) and a handful of easily forgettable faces who shouldn’t have been cast the first time, let alone the second.

Is it trashy? Of course. Is it watchable? Unfortunately, yes.

The debut episode was preoccupied with major issues like: Should the mischievous Davey pursue in-demand Dutch girl Florence even though his mate Jake has kissed her? Does that guy Brett really have a girlfriend waiting for him outside the show? Will Tara sweat off her palm-print crop top? And how will the developing “love square” play out?

Perhaps this is the kind of stuff modern people want to watch. It’s simple, manageable increments of emotional turmoil happening to people who have no one but themselves to blame. It certainly makes for far less disturbing viewing than Question Time.

The “will they, won’t they” tension should be enough to carry the show forward, while genuinely hilarious characters like Keira and Laurina will do the producers’ jobs for them.

It’s unlikely BIP will emulate the success of MAFS, but it will probably find itself a loyal, engrossed audience who will guarantee at least two-thirds of the contestants go home with their own FM radio show, if not their soulmate.

We’re not even halfway through 2018 and it’s becoming abundantly clear the advent of streaming and downloading has made free-to-air television fairly redundant, aside from sport, news and, apparently, trashy reality TV. And maybe that’s ok.

Perhaps success in today’s entertainment landscape lies in knowing your place and your purpose and executing it well. And Bachelor in Paradise is certainly nailing its questionable brief to a tee.