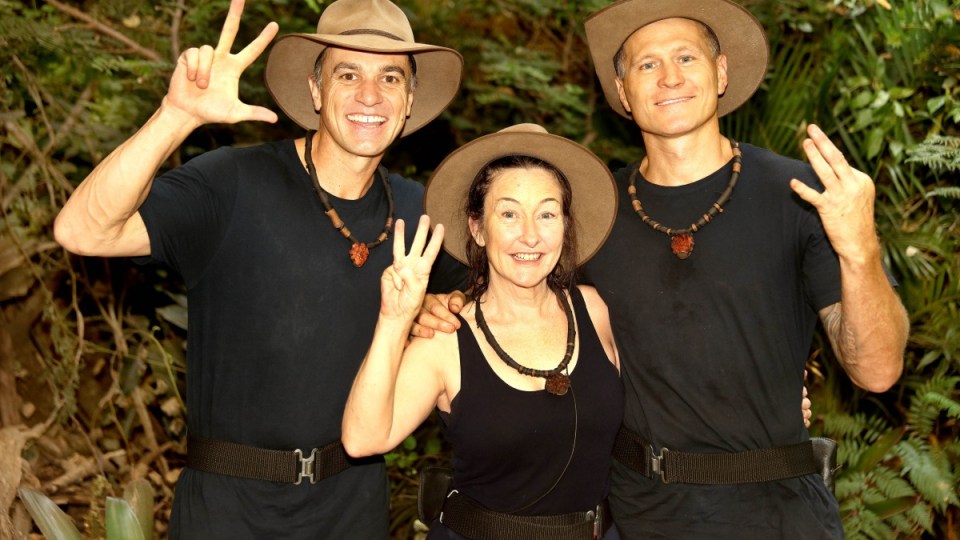 Comedian Fiona O’Loughlin has won Channel 10’s I’m A Celebrity … Get Me Out of Here! on Monday night, knocking singer Shannon Noll into second place yet again.

Australia’s twitterati cried at the result as they recalled his loss to Guy Sebastian in 2003’s Australian Idol.

But it was co-host Dr Chris Brown’s “naughty bits” which were, unintentionally, the true star of the show.

Brown and Julia Morris had donned tight white Lycra suits to take part in the slippery, wet slide and climb to “celebrity heaven” – the contestants’ last challenge of the series. Brown’s lower body was covered with a graphic as he started and he spent much of his time struggling with his dignity as the three finalists roared with laughter.

O’Loughlin was a popular winner – renowned for her infectious laugh and strength during the series.

But will she be the last? Showbiz industry stalwarts like Peter Ford are calling an end with this series.

It’s easy to see why. The series opener – up against the Australian Open men’s final – started well with 1,274,000 viewers, an increase on last year.

But it was downhill from there with two of the contestants choosing to leave the show, as the other contestants noted scathingly in the finale.

Tennis player Bernard Tomic lasted just three nights and now boasts of the million he earned for the time in the jungle.

“Tomic spent 48 hours in the camp, 46 of them lying in his bunk with his hand on his head,” Peter Rowsthorn said.

Boxer Anthony Mundine followed soon after, saying “I’m The Man, get me out of here” after a scrap with fellow boxer Green.

Green mocked him in the finale with: “I won our last fight and I’m still here.”

In came the Oldfields – Lisa of Real Housewives of Sydney and her husband David, former politician and now serial TV show contestant.

Their arrival caused fury in the camp and among the audience and the ratings dropped below 500,000 for the first time in the four series.

David Oldfield’s former political ally, Pauline Hanson, was quoted as saying: “Well that does not surprise me whatsoever. He never did anything positive for the ratings of One Nation either.”

Not even the royal revelations by Princess Diana’s butler Paul Burrell or the antics of Geordie Shore’s Vicky Pattison, did the trick. Clairvoyants Jackie Gillies and John Edwards could have told the producers they had no chance with this series.

The casting clearly didn’t draw the audience – with the exception of the comedy act of O’Loughlin and Rowsthorn who entertained with their made-up couple Ron and Brenda.

It was scheduled up against the love juggernaut of Married at First Sight and MKR which cost a fraction of the breathtakingly expensive I’m A Celebrity and rated twice as well.

Celebrity was even beaten by its stablemate, the extremely cost-effective Gogglebox Australia, so it’s hard to see why Ten would keep pouring money into it.

But Australian television is renowned for reinventing and reinvigorating failing formats. Maybe with a clever revamping and refocus and definitely a new time slot, Celebrity might rise again.

Watch as Fiona O’Loughlin is crowned the winner:

Comedian Fiona O’Loughlin claims I’m A Celebrity … Get Me Out of Here! crown