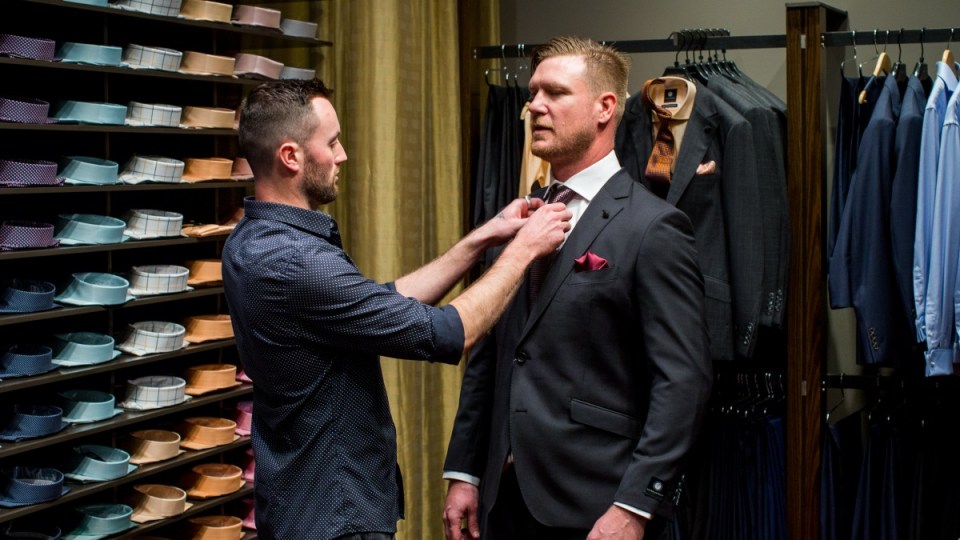 Dean (right) getting suited up for his MAFS wedding to Tracey, where he admitted he couldn't stop staring at her breasts. Photo: Nine Network

Controversial Married at First Sight contestant Dean Wells has been forced to defend himself on national television and radio after his reality television debut on Monday night cast him in a less-than-positive light.

Heavily featured in promos for the Channel Nine series thanks to his “traditional” views on gender roles, Dean’s first appearance incited outrage when he made gratuitous comments about his bride Tracey’s body.

“She’s got a really good rig,” was his first charming appraisal of his future spouse, before admitting he struggled to make eye contact with Tracey during their vows because he “couldn’t stop looking at her chest area”.

Introducing Dean on the Today show on Tuesday, host Karl Stefanovic described him as, “[one of] the most controversial, dare I say hated, men in Australia this morning”.

“It hurts my feelings a bit,” Dean said of the backlash he’s faced on social media since the episode went to air.

“No it doesn’t!” Stefanovic exclaimed.

“The whole alpha-male thing has been blown a bit out of proportion,” Dean responded. “I just like to take responsibility for my life and for my partner and I don’t think there’s anything wrong with that.”

Stefanovic then challenged Dean over his “old school language”.

“It’s, at best, sexist and, at worst, offensive. Do you regret any of those comments?” the Today host asked.

“I wouldn’t say I regret any of them, no. I don’t think Tracey was offended by any of it, and that’s the main person whose opinion I’m worried about,” Dean said.

Tracey, for her part, appeared unbothered by the controversy, telling Stefanovic and co-host Georgie Gardner, “Dean is what I asked for”.

‘It will be an interesting journey to watch…’ @MarriedAU Newlyweds Dean and Tracey on @TheTodayShow​. #MAFS pic.twitter.com/CDLbnvKil0

Dean didn’t limit his charm offensive to television, also appearing on radio in Sydney to chat to Nova 96.9’s Fitzy and Wippa, who asked if his macho act was all for the cameras.

“I do definitely believe all those things that I said, but not in such a serious way. I can say things for shock value sometimes,” Dean admitted.

“I’m just trying to have a laugh with it all. I respect a woman for her brain and intelligence … but obviously I’m attracted to the chestle area and a woman’s body as well so I don’t think it’s a huge problem.”