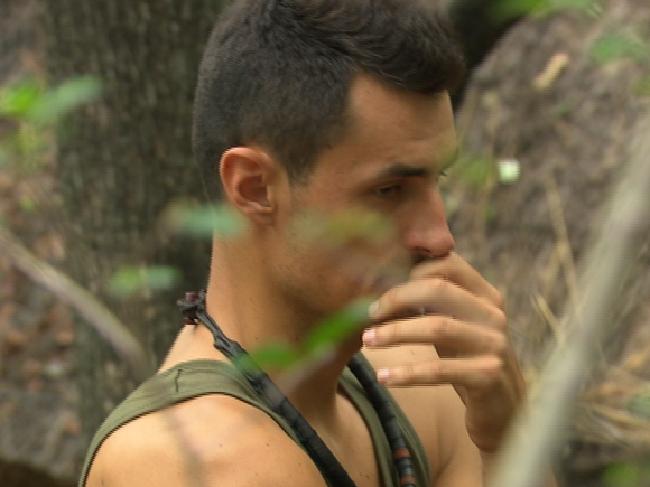 Wayward tennis star Bernard Tomic admitted he “made the wrong move” by entering the jungle for I’m A Celebrity … Get Me Out Of Here! after sensationally quitting the Channel 10 show after just three nights.

The 25-year-old, who has come in for waves of criticism over his behaviour in recent times, said he was depressed and constantly doubted himself before joining the program.

“It’s my fault,” Tomic told co-hosts Julia Morris and Chris Brown upon his exit from the South African wilderness. “I was doubting myself a few times before I came here.

“I put pressure on myself and tried to convince myself … when I knew it wasn’t the right thing.”

Tomic apologised to fans he may have let down, while Brown commented on his mental health: “You’re not a happy guy.”

The tennis star replied: “I feel you, brother. Thank you,” before confirming: “My mind became twisted.”

“I thought by coming here it would make me a super happy person, but it didn’t. I made the wrong move and I regret it. But I’ve gotta live with it and I’ve gotta get back to tennis.”

Tomic is the first contestant in the show’s four-season history to quit mid-series. In his short time on I’m A Celebrity, Tomic jumped out of a helicopter and was bitten on the hand five times by snakes.

Tonight: It's official. Bernard Tomic is our first-ever Celebrity to say "I'm A Celebrity Get Me Out Of Here!" Stay tuned. #TomicWalks #ImACelebrityAU pic.twitter.com/AsiSUIZl9V

Tomic’s abrupt departure caused quite a stir on social media, with some people believing his early exit is a cop-out, while others feel he is unwell and needs to get help.

“Half the time during the day, I’m just depressed … I don’t want to spend half my time depressed here, you know?” he told fellow contestant Jackie Gillies.

“I’ve never really had time to think about my thoughts. I’ve always had people around, my mobile phone … everything was so fast-paced.”

Seeing Bernard Tomic on #ImACelebrityAU has confirmed that he clearly needs help. Not ridicule. Simply just a kid that’s battling some form of depression and happens to be good at tennis @beyondblue

Channel Ten is already facing backlash from fans for not doing enough psychological testing before sending Tomic into the jungle.

Pretty weak effort from #Tomic, throws the towel in once again. #ImACelebrityAU https://t.co/18rAejzdtA

Just a few weeks ago, when Tomic failed to qualify for the 2018 Australian Open, he lashed out at the competition and the sport, telling reporters he didn’t care about tennis and was happy “just counting my millions”.

However, after a couple of days in the jungle, it seems Tomic has radically changed his tune.

“I like tennis a lot. I like it so much but I don’t love it,” he said. “I wasted this whole last year of not playing a lot of tennis and being professional.”

“I need to be competing and playing in what I do best and that’s why I’ve decided to leave.”