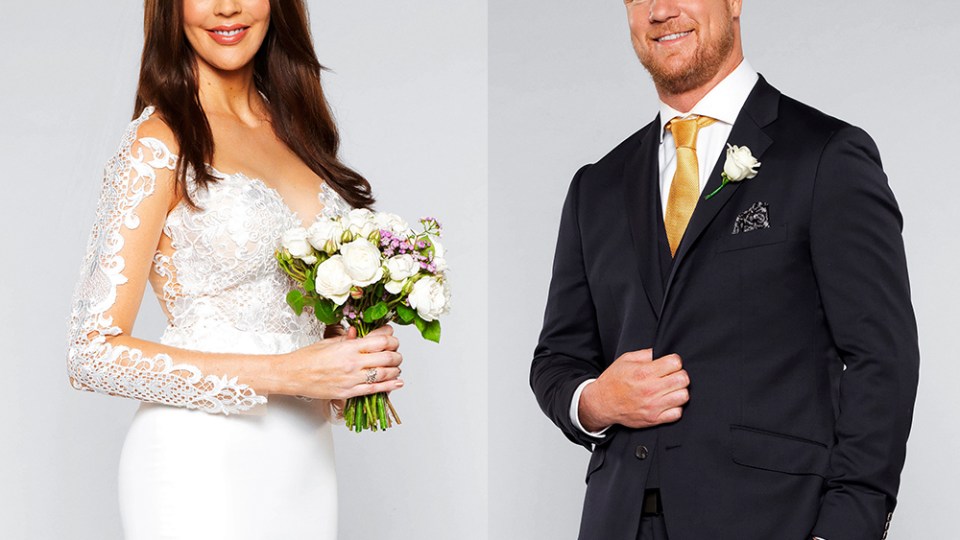 Tracey has fresh botox and an eight-year-old daughter, while Dean has an obsession with taking the lead. Let's see how this goes. Photo: Nine

A “self-confessed alpha male”, Dean copped a caning for the Married At First Sight promos on Channel Nine – and he didn’t disappoint in Monday night’s first episode of the ‘social experiment’ show.

The hopeful bachelor’s wish list included “a tall, beautiful brunette” who is into makeup and shoes.

The “expert panel” hasn’t always gotten its pairings right. But this time they’ve paired Dean with Tracey, 34, who has recently had her boobs and Botox done, and is ready for a relationship.

The inevitable fly in the ointment? Dean’s overprotective best mate Liam has flown in from California to take an active role in proceedings.

He quickly makes it clear he’s not a fan of this arranged “marriage”.

Dean, on the other hand, is extremely happy when he first sees Tracey. She’s not blonde, for a start.

“As soon as I turned around I relaxed,” he said.

“She has a good body, she’s tall but not too tall and has a really good rig.”

Tracey’s delighted with what she sees too: “As soon as I looked into his eyes, I knew he was lovely. A man’s man.”

Dean, however, struggled to find her eyes when it came to swapping vows: “I’m not going to lie. I definitely kept looking down at her chest area.”

He didn’t limit himself to just looking and was soon gripping her bust and bottom as the photos were taken, declaring that while society seems to want women to take charge, it’s “not their natural state”.

This being reality TV, there’s a catch beneath the fledgling couple’s superficial delight, of course.

What Dean doesn’t know is that Tracey is the single mother of an eight-year-old daughter.

Liam threatened to reveal this fact before Tracey told her new “husband” because he thinks Dean should pull out of the arrangement before he’s in too deep.

He circled the dance floor like a shark, trying to prise Dean away from Tracey and drop the bombshell, but was thwarted,

When he did eventually find out, Dean was evidently rattled by Tracey’s news.

“It’s definitely freaked me out a bit,” he said, his groom glow slowly draining away.

Meanwhile, there were no shocks in store for “very proud Aboriginal man” Telv, 33, a fly-in, fly-out worker.

But when he saw his bride Sarah for the first time, he cried.

“Wow. She’s quite curvy, she’s got an incredible smile. She’s ticking the boxes,” he said.

Beauty therapist Sarah, 38, has had a shocker of a couple of years, saying her last partner abandoned her when she became pregnant with twins that she miscarried.

In her wedding speech, Sarah talked of her longing to be a mother and Telv seemed fine with the potential responsibility.

“I’m going to make that happen,” he said.

“If there was ever a bloke punching above his weight, it’s me.”

It was an absorbing premiere for a show that started out with a clever and simple premise: can science predict love?

This premise has arguably been subsumed by contrived casting and tension, meaning few have lived happily ever after but plenty have tuned in.

Still, 5000 people applied to be on this series. Let the love games – and guilty viewing – begin.