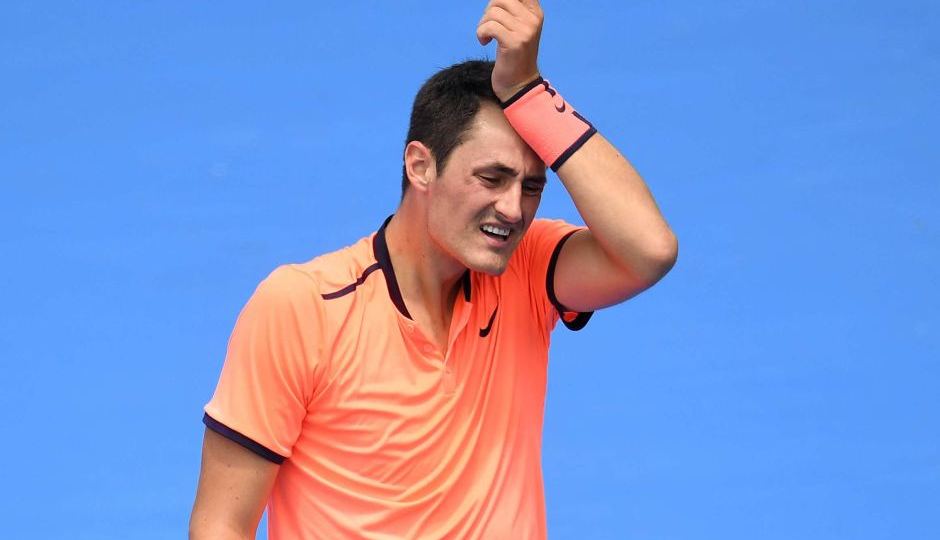 Could Bernie be heading into the jungle? Photo: AAP

Whose career is knackered and they’ve got nothing else to do? Who would be happy to receive a decent pay packet for slumming it in “the jungle” for a few weeks? Who just can’t resist the publicity?

Yes, we’re playing the Channel Ten promotional game. Who could be going to South Africa for I’m a Celebrity … Get Me Out Of Here!, which starts on Channel 10 on Sunday, January 28.

The cast won’t be revealed until then but Ten has been drip feeding promos for weeks and the network’s entertainment boss Stephen Tate has been quoted as promising a “bumper crop” of celebrities and international stars.

Here are all the confirmed hints, complete with the stars who fit the bill.

There’s a gazillion of those but the Twitterati has chosen Bernard Tomic amid claims he has been offered $1 million to take part.

That was before he turned up for the Australian Open qualifiers, apparently in an effort to revive his career.

His failure to qualify, complete with a snarky “All I do is count my money” comment to journalists after the loss, has already sparked more frenzied speculation.

Mind you, ‘World Famous Tennis Star’ Henri Leconte has been in Australia, appearing in advertisements for Victoria. Maybe it’s him?

A “loveable princess who knows how to keep it real” but is also a “prima donna”.

The chatter (not that there’s much of it) is saying Elyse Knowles from The Block or Lisa Oldfield from Real Housewives.

Caitlyn Jenner of Kardashian fame has also been named – along with UK Celebrity winner Vicky Pattison who has been in Australia recently and says she “wants to come back”.

The pop sensation known only by their first name

It will probably be someone from overseas, but Australian Idol contestant Paulini’s been in strife recently with a court appearance so maybe this is a way back.

Or how about Gotye. Remember him? Somebody That I Used to Know was the biggest-selling single in Australian history in 2013. Fans are still waiting for a second album.

The iconic Australian actor ready for a tree change

Well that’s a cast of thousands. Kerry Armstrong has been mentioned but it could be Sigrid Thornton who was in Sea Change and recently starred in Wentworth.

The Australian stand-up queen with ‘a lot to talk about’

Em Rusciano has been mentioned but she’s touring with her Evil Queen show from February. It would be amazing if it was Celia Paquola but perhaps more likely is Meshel Laurie.

Laurie was recently replaced on KIIS FM radio breakfast and she was once a stand-up queen.

The world champion sporting superstar with a strong social conscience

Ian Thorpe‘s name has been bandied about but how cool would it be if it was recently retired Usain Bolt? Although he has apparently applied to play for Manchester United so we can but dream.

Brian Mannix has been teasing his involvement with a series of posts about African animals and smoking his last cigarette for eight weeks. He’s dreaming!

Jimmy Barnes has sold more records in Australia than any other Australians so is it time for The Working Class Man?

The AFL champion known for his hair-raising play

Jason Akermanis and Warwick Capper would be the lazy picks.

There are just too many to speculate. Pass.

Some have suggested Kel (Glenn Robbins) from Kath and Kim and he’s got a new a series of All Aussie Adventures due on Ten this year. Makes sense.

I’m a Celebrity … Get Me Out Of Here!: Who’s going into the jungle?