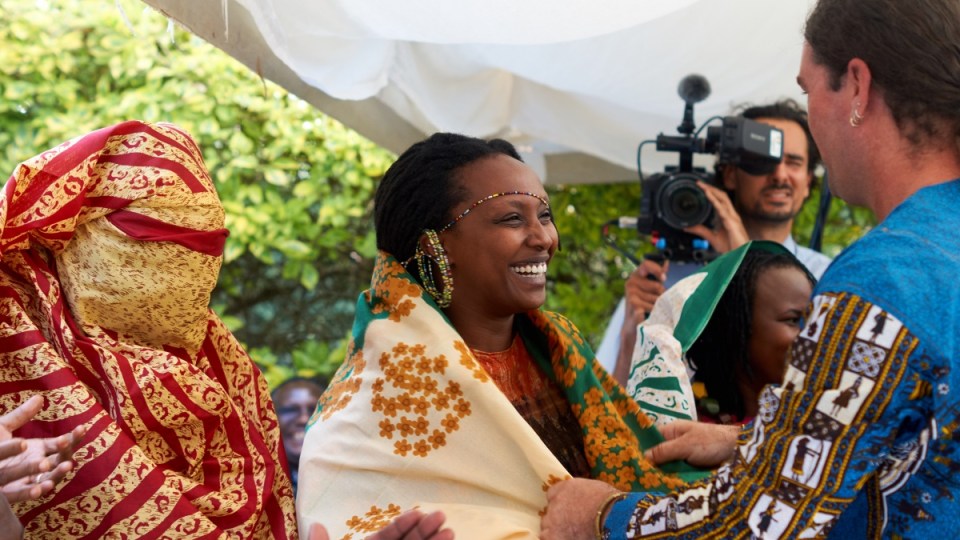 When Adelaide skip truck driver Mark Bennett met his dream woman at a casino bar, he couldn’t have imagined having to barter a “goat” dowry for her hand in marriage in the Kenyan capital of Nairobi.

Or, having succeeded in that negotiation, having to correctly identify her from a line of fully cloaked women to seal the deal.

But sustainability expert Wambui Gikenye is a Kikuyu woman and their story was a fascinating start to the Marry Me, Marry My Family series, which began on SBS on Tuesday night.

Wambui – the daughter of a Kenyan doctor – came to Adelaide to study and stayed on after meeting Mark.

“Mark is my best friend. I can tell him anything,” she said.

“She’s funny, intelligent, good to be around but I don’t think you can define that click that happens sometimes between people,” he said.

Mark’s mum died young and he and his brothers were brought up in a typical Australian household by their grandparents.

“We never had an African set foot in our house before,” he said to his grandmother Phyllis. “Not that that mattered, did it?”

Phyllis shook her head, saying, “Of course not.”

Mark’s family couldn’t make it to the wedding in Nairobi – but two of his late mother’s best friends, Linda and Alex, were there.

Alex was particularly important to this entourage because there had to be “a grey-haired man” to negotiate the dowry on Mark’s behalf. As a South Australian senator, he’s had plenty of negotiation practice.

Before the discussions could start, Wambui had to agree and identify Mark as the man she wanted to marry.

The negotiations were conducted away from the camera and, these days, money replaces the traditional livestock – though people still talk about the number of “goats” as the dowry.

After a “pretty hectic two hours” they agreed a price – but it wasn’t paid in full. Payments continue over the years.

“It’s not about the amount of money,” explained Wambui. “It’s a negotiation to bring these two families together.”

Mark said it was “one of the great moments of my life”, as Wambui’s negotiator announced: “We have agreed to become one family with them.”

What’s beautiful about Mark and Wambui’s story is the willingness of their two families from a vast cultural divide to accept their children’s choice of partner.

Armenian Christian Nancy and Indian Hindu Ashu were not so fortunate.

Nancy’s mother Guila was devastated that her daughter was marrying outside the Armenian community – likening her daughter’s wedding to a marriage of “a dog and a cat”.

“One day when she becomes a mother, she will understand. Right now she lives in fairyland,” Guila said.

All Nancy wanted was her mother’s support.

“I just want to see my mum looking at me the way she used to. I want that smile back.”

Fortunately her father Khoren was more accepting in his speech.

“Nancy is our daughter – we will always think of her like a princess. Ashu – we have known him for 18 months, we have had our ups and downs, but I think we have made it. You are like our son now and I hope you will be there forever.”