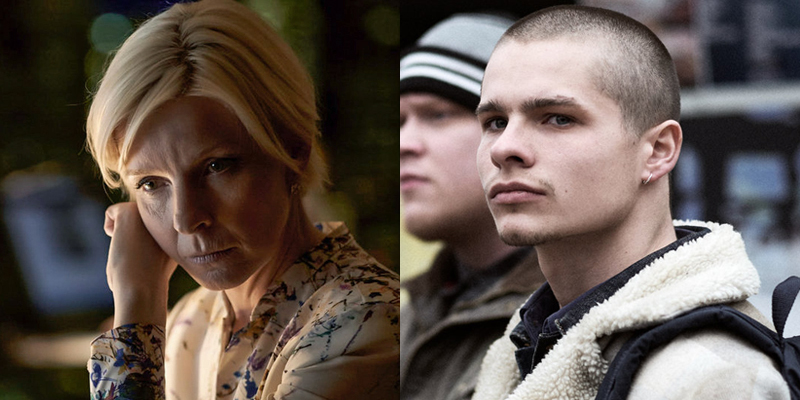 Family reunions can be fraught, but when mother meets estranged son in Stan’s new Romper Stomper series, released on new year’s day, the showdown is electrified.

Jacqueline McKenzie returns as Gabe, the tough as nails character she played in Geoffrey Wright’s 1992 film.

Back then Gabe was a drug-addicted young woman inexorably drawn to Russell Crowe’s violent neo-Nazi Hando, and also to his conflicted right-hand man Davey (Daniel Pollock), as they terrorised Melbourne’s Asian community.

But Kane has no intention of taking advice from the mum who gave him up for adoption.

“She is watching her son move down the same path that she did and make all these f–––ing mistakes and she’s trying desperately to save him, and herself from her past as well,” rising star Wallace says.

A revelation in the role, the moment he stares down Gabe’s intervention is terrifying. A steely-eyed menace, Kane’s all the more confronting for his eerily cool demeanour.

“I remember going to the audition with Geoffrey I was like, ‘I’m gonna have to get as calm as possible because there’s nothing scarier than someone who just doesn’t care, and that was the point I really wanted to build upon.”

McKenzie was taken aback by their sparring and see a big career for Wallace, with the original movie having catapulted Crowe into the A-list.

Though Gabe has turned her life around and is now a successful businesswoman, she’s haunted by her decision to give up Kane for adoption and is determined to sway him from following the same path she did all those years ago. But his loyalties are heard to determine.

“Gabe has never been tied to that cause, and I don’t believe that Kane is either,” McKenzie says, “and that makes him a dangerous entity.”

A character trait he shares with his mother, McKenzie notes, “She was dangerous back then and she still is. She’s just got a twin set and pearls now.”

McKenzie relished steeping back into Gabe’s skin, as well as working with Wright again, who wrote and directed two episodes of the six-part series.

“I’ve been dying to work with him again,” she says. “Romper Stomper was my first film and I really didn’t know what I was in at the time. It was so edgy and alive.”

She and Wallace hammered out the charged familial showdown in six or seven takes. “Every single take we did, she was just on fire the entire time,” Wallace says. “It’s so much easier when you are acting across from someone like that.”

Did he find the role’s racial violence confronting? “In a kind of hilarious way, no, not really. I’m pretty sure everyone on set was pretty damn liberal and the Patriot Blue guys were all so funny. I don’t think there was a day went by when I wasn’t in tears laughing.”

“It’s pretty clear what our views on extremism are and the problems that it creates,” Wallace says. “I hope it starts a conversation in the end. That’s the point. So why do these people exist? Why are things going this way?”