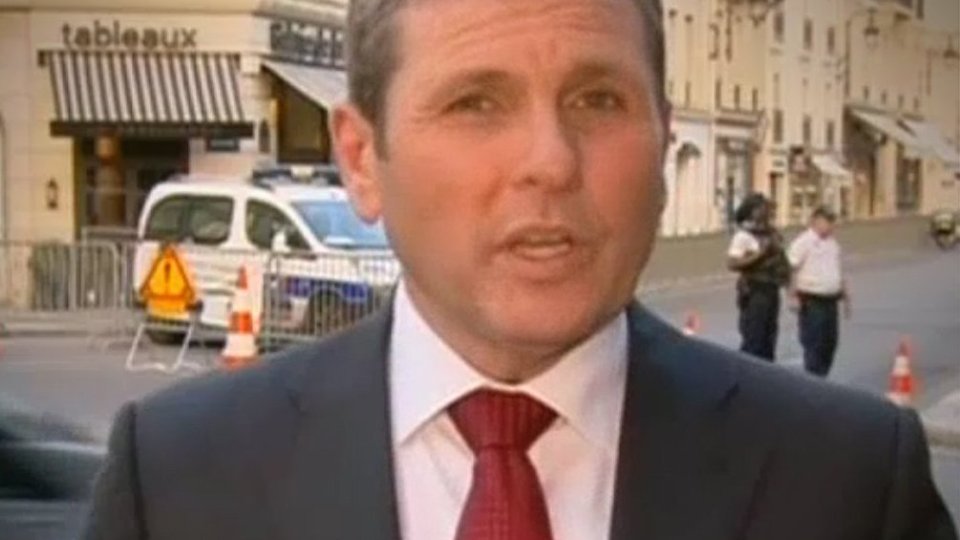 From skewering Trump to being skewered on Today: Chris Uhlmann has had a busy 2017. Photo: ABC

Just over a week into his fortnight as Karl Stefanovic’s stand-in on Channel Nine’s Today show, Chris Uhlmann found himself sitting next to Richard Wilkins on the set, popping bubble wrap and looking a mix of rueful and calmly accepting.

Just five months ago, during the G20 summit in Hamburg, Uhlmann was ABC TV’s political editor. As the Huffington Post put it, he took two minutes and 14 seconds in a piece to camera to “best summarise the inexplicable nature of the Donald Trump experience”.

After Uhlmann’s excoriating analysis on the US President was aired on the Sunday morning show Insiders, it went viral, making headlines around the world and scoring a retweet from JK Rowling.

Cut to his new life at Nine, where he replaced Laurie Oakes in October, and Uhlmann, 57, is the one being pilloried – on social media – for turning his experienced, senior hand to commercial breakfast TV.

Between interviews with the likes of Foreign Minister Julie Bishop, the Walkley Award winner has snuggled kittens and pumped out ‘couch-ercise’ reps with an enthusiastic trainer during a segment called Core on the Couch.

The response has been mixed.

“Man, you and f––– Richard Wilkins at the same desk … God help us,” wrote one Twitter user.

Slammed another, “He went to Nine for the money. Now he has to earn it and debasing himself in this way is only a part of what he’ll have to do.”

Is debasing too harsh?

“Yeah, well the purism in all of this says that’s not exactly the top of the journalistic pile, is it?” says Steve Allen, founder of Fusion Strategy.

As to that, a Nine spokesperson tells The New Daily that Uhlmann is thoroughly enjoying himself.

“He is. He’s having a wonderful time,” says the spokesperson, who says  Nine swinging Uhlmann on to breakfast hosting duties should not be interpreted as meaning he’s auditioning for Stefanovic’s job.

“As always during the summer period we rotate the gig to all our guys. There’s no rhyme or reason for it. It just consistently changes to whoever is around. He’s part of the family.”

While the Today co-host role is temporary, that knowledge is no balm to armchair critics, who have questioned whether a trusted, respected journalist is really having fun onscreen or is making a fool of himself.

In the lead-up to Christmas, the gig saw him sit between Wilkins and co-host Deb Knight for a segment with a performance coach on how to fake the perfect ‘gift face’ when opening dud presents.

Uhlmann asked the coach to “talk us through” what facial expression to adopt when opening a gift, and was advised to “practise” a suitable expression at home.

Later, after Wilkins demonstrated the dark art of simultaneously unwrapping and looking grateful, Uhlmann took a shine to the leftover bubble wrap, reaching out three times as if on autopilot to pop it.

Despite the raised pitchforks of some, a TV insider tells The New Daily that Uhlmann is “a real mentor and a valuable, available teacher” for more junior Nine staff.

“I can’t see him doing Today full-time but this stint just shows his versatility, and he looks like he’s genuinely rapt to be there.

“Some tabloid press gallery competitors would be like, ‘I’m a genius, I’m not doing breakfast TV’ but Chris Uhlmann is doing it with good grace and a sense of humour.

“Nine is getting their money’s worth. His interviews have been great and now we know he can cuddle a kitten and not look like a Muppet.”

Other social media critics agreed. Wrote one this week after Uhlmann drew fire on Twitter for choosing Nine over the ABC: “He is not doing anything immoral or unethical, so get off your high hobby horse.”

Despite rumours persisting that Stefanovic wants out of Today and Nine could be secretly auditioning a new host in plain sight, Allen believes the Uhlmann experiment is just a summer romance.

“I think the bubble wrap fiasco will soon be behind him.”