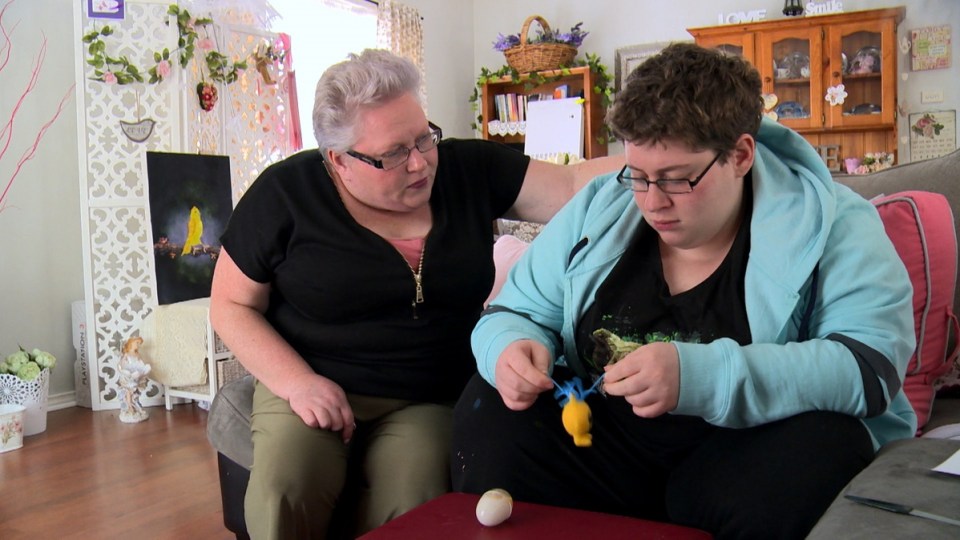 Michelle has tears in her eyes as she watches her incurably ill daughter Jessica at her art class, painting her pet budgie.

“It’s what keeps her going – she can forget about it all when she’s painting,” Michelle tells SBS’s Struggle Street series, which concluded on Thursday night.

Jessica can attend art classes because the teacher, Doreen, waives the fee. There’s no money for such things for the one million people with disabilities who live below the poverty line in Australia.

Jessica, 23, has 34 diagnosed medical conditions and her life expectancy is about 40 years.

Soon she won’t be able to walk and her full-time carer and single-parent mother can’t afford the wheelchair she will need.

In fact, Michelle had to delay paying bills so she could buy the $103 chair her daughter needs to be able to shower.

Jessica is desperate to go to a clinic in the US city of Baltimore, which can help her better manage her diseases.

She launched a GoFundMe page in 2016 to help with the costs of getting there and meeting the costs of her deteriorating conditions.

Jessica talks to one of the Baltimore specialists via Skype to see what she can do to help ease the pain from her regularly dislocating joints.

The doctor suggests aqua therapy and specialist physio, neither of which Michelle can afford.

It’s the relentless disappointments and setbacks that have been the power of this series of Struggle Street.

Josh is newly released from prison on parole. He sleeps rough with his partner Monica. He has no job and, without ID, he can’t get a place to live even at a caravan park.

He goes to the Births Deaths and Marriages office in Brisbane to get a copy of his birth certificate. He can’t get it without two forms of identification – including one with his home address on it.

Eventually Centrelink helps out but he has to wait a week to be able to afford the birth certificate fee. In the meantime, he sleeps in a derelict building and under threat. He shows a knife he says he will use if he and Monica are attacked.

Former heroin addict Michael’s story has been a thread through the series and it doesn’t get any better. He gets new teeth and persuades his brother to let him have his mother’s car. It gets totalled in an accident as he is on the way to register and insure it.

He gets access to $3600 of superannuation because of his tough financial circumstances. Within weeks it is gone – spent on paying outstanding bills, vet bills for his dog and a $1200 guitar and amplifier.

“You’ve got to realise what music does for me. How much it relaxes me. After a jam session, I haven’t thought about any problems, anything from the past – anything from the future,” he says before pawning the musical gear to pay rent.

But thanks to Michelle and Jessica, the series ends on a sweet note. Jessica’s painting of her budgie is displayed in a local art auction and sells for $150.

“I’m so proud of her, she never gives up,” says Michelle.

“I think this is the best experience I have ever had,” Jessica says as they leave the gallery.

And in a heartwarming finale, as a direct result of the airing of the episode, Jessica’s GoFundMe page skyrocketed to more than $73,000 in donations.

Thanks to Struggle Street, she may just get to Baltimore for the help she needs.