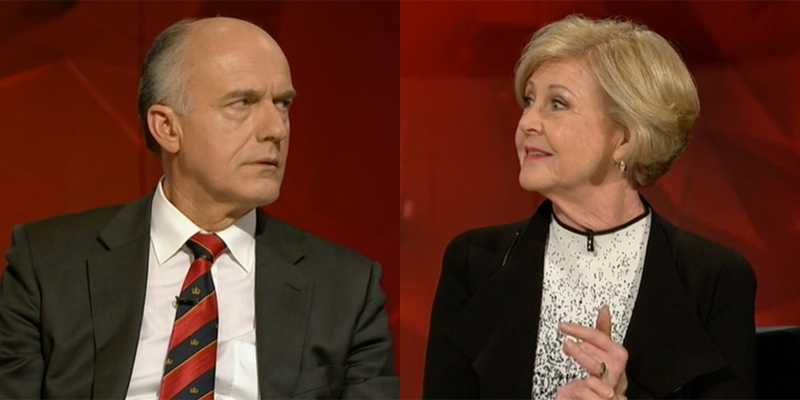 Eric Abetz and Gillian Triggs were at odds several times during the broadcast, although it was always civil.

Former human rights commissioner Gillian Triggs has claimed Australia’s detention of refugees on Manus Island is “designed to break them” in a fiery exchange of words with a Liberal senator and an IPA policy boss.

On Monday night’s episode of Q&A, Ms Triggs said Labor-Liberal politics should be set aside so the “inhumanity” of the situation on Manus can be addressed. Her preferred solution was to bring the men to Australia.

“It’s a difficult decision for both political parties. But I think the inhumanity has reached a level where we, as a nation, have to respond. We’re ashamed of this policy. It’s not Australian. It’s seriously in breach of our international obligations.”

Liberal senator Eric Abetz interrupted at one point to accuse Ms Triggs of politicising the issue when she was head of the Human Rights Commission, by delaying an inquiry into conditions endured by child detainees until the Liberal-Nationals took power under Tony Abbott.

“Why did you only inquire into offshore detention once they were being emptied under our government?” Senator Abetz asked.

Ms Triggs denied this. She said the inquiry was largely critical of Labor and that it was “very interesting” that Labor took its criticisms “on the chin”.

.@GillianTriggs says it's human lives & the detention is designed to break them. @Kate_McClymont raises the secrecy #QandA pic.twitter.com/HYMBvwqBpq

The distinguished lawyer came under intense questioning several times during the program, including over the controversial Queensland University of Technology case, where several students were accused of racism for entering an indigenous-only computer lab.

Ms Triggs defended the Commission’s handling of the case, blaming the “very low” threshold of accepting complaints, set by law, as well as the university’s request that the students not be informed of the complaint from an indigenous student – which resulted in the students not learning of the case until two days before a mandatory hearing.

In perhaps the closest she has come to an admission that the case was mishandled, Ms Triggs said she “deeply regretted” that the case was not settled out of court, and that she was “deeply sorry” the students were “not advised in time” of the complaint.

One of the accused students in the audience said he was dragged through the courts despite a subsequent finding that he had never entered the indigenous-only lab, nor posted discriminatory language on Facebook.

Senator Abetz and Institute of Public Affairs policy director Simon Breheny strongly criticised the Commission’s handling of the case, as they have done publicly in the past.

The panel were united in their criticisms of Mr Yiannopoulos, but it appeared all were reticent to support a ban on his speaking at Parliament House, either for reasons of freedom of speech, or because it would fuel interest in him.

Mere hours before the filming of the Q&A episode, violent clashes between left and right-wing groups erupted in Melbourne outside a venue hosting Mr Yiannopoulos.

Hundreds of protesters from left-aligned Campaign Against Racism and Fascism and two right-wing groups, Reclaim Australia and the True Blue Crew, rallied with a heavy police presence attempting to maintain order.

There were reports of fist fights and of protesters wielding crude weapons. Police pepper sprayed dozens from either side.

‘Designed to break them’: Gillian Triggs clashes with Eric Abetz on Q&A over refugee crisis