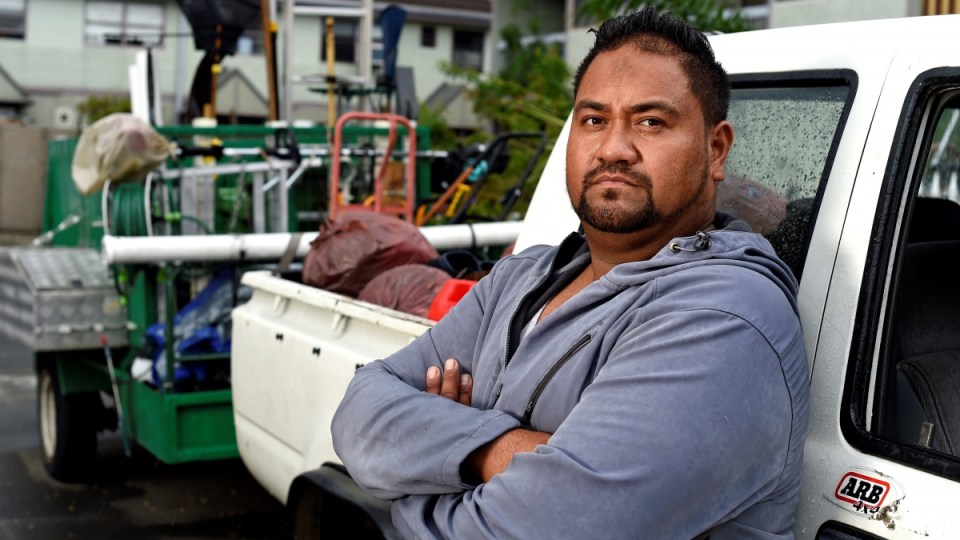 Allan, who has been out of work for three years, is trying to get his life back on track. Photo: SBS
review

A few of us might experience a twinge of anxiety when we collect our mail – but nothing like the stress faced by Allan in SBS’s Struggle Street.

“Happy, yuck, happy, happy, yuck,” he said as he sorted through the envelopes in the Melbourne suburb of Broadmeadows.

His mail is like his life. He has been diagnosed with schizophrenia and anxiety. He’s been out of work for three years and is crippled by debt.

He couldn’t keep up payments on $4000 worth of traffic fines from more than 10 years ago, so took shonky bank loans – known as “pay day loans” with crippling interest on failed payments. The debt has blown out to $30,000 as the interest compounded.

It’s tough to watch people like Allan – an apparently decent bloke who just wants to do right by his family but can’t drag himself out of a hole.

Even when things promise to go right, it’s only a matter of time before he gets another slap in the face.

Watch the trailer for season two below:

Allan has managed to buy an old Toyota Hilux and the tools he needs to start a gardening business – thanks to $5000 from a federal government incentive program.

But the Sheriff’s Office is threatening to take the lot to pay the outstanding fines, and nobody has told him until now that his diagnosed mental illness is a reason to have the original fines waived.

Presumably the producers have pointed him towards the Broadmeadows Community Legal Centre and they offered to help.

But then Centrelink reduced his payments because he was about to start a business and his Government Health Card has been cancelled – apparently without warning.

Allan’s much-needed medication has increased from $5 to $35 per prescription.

He has to apply all over again before his Health Card is restored.

Somehow, Allan still managed a laugh with Centrelink on the phone as they sorted out this mess.

“Mate when I win Lotto or get a million dollars, I’ll make sure you get some,” he jokes.

He did his first lawn-mowing job and, after costs and travel are paid for, will pocket about $30.

“It’s better than nothing,” he said cheerfully.

His happiness lasted literally a few minutes before a family member called, saying the council had heavily fined her after her dogs escaped from her home and she needs help. Allan finally loses his cool.

“I may as well be a f–––ing drug dealer than put up with all of this shit,” he says.

The producers were criticised for not helping some of the people they filmed in this series – particularly when former heroin addict Michael almost missed his mother’s funeral.

It’s not their role. Besides, where would they stop? Should they pay off Allan’s debt? Or paid outstanding rent so Norma wasn’t evicted from her home?

Allan’s optimism is impressive and infectious.

He dreams of driving a Lamborghini or a Ferrari if he can make his business work.

“Do you honestly believe that?” he’s asked by a producer.

“Mate, anything is possible.”

Struggle Street: Allan’s down on his luck, but certainly not out