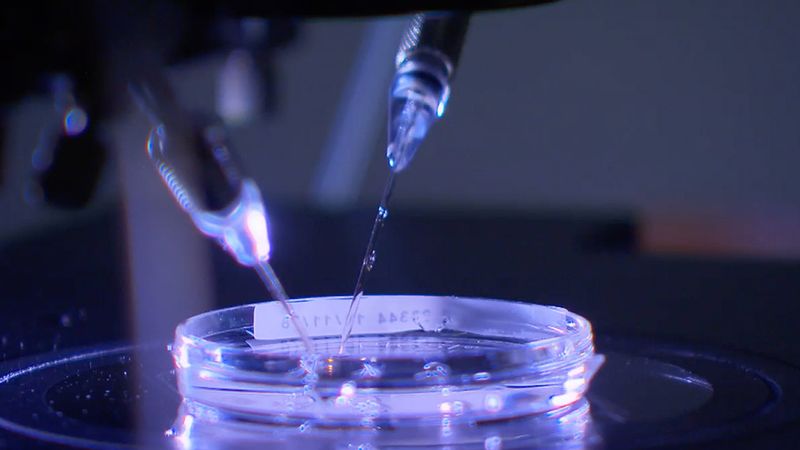 Australian mother Natalie Parker was left in shock when she came across a photo on social media of a baby who bore an uncanny resemblance to her own son.

It was not a coincidence.

Ms Parker discovered this baby was in fact her child, the result of a leftover embryo donated to another family who were unable to have children of their own.

Her ordeal has exposed the pitfalls in the unregulated fertility industry, revealed in a 60 Minutes exclusive on Sunday.

The Nine Network program posed the question: “Could you give your genetic children to desperate parents you might never know?”

Could you give your genetic children to desperate parents you might never know? 8.30 TONIGHT: Australia's biggest fertility dilemma. #60Mins pic.twitter.com/8KzE50nZW1

Once a couple completes IVF (In vitro fertilisation), they are given an ultimatum – have any leftover frozen embryos destroyed or donate them to a couple struggling to have their own baby.

It is an ethical dilemma differentiated from egg or sperm donations as an embryo is human life in its earliest stage of development.

If donated, the genetic sibling could be raised in a family, estranged from their biological parents and with no means of tracking their family history later in life.

Melinda and Dhia are in the process of coming to terms with making this decision for their unborn babies.

At the end of the day, it’s like giving the most precious thing you have to a complete stranger.

“One of my fears is if the family that’s going to raise them doesn’t raise them properly or is an abusive family,” Dhia said.

“You can’t really tell just from someone filling in an application or sitting an interview, whether they will be a good or bad parent.”

IVF Australia’s Professor Peter Illingworth said the majority of couples choose not to go ahead with donation because the decision is “too emotional”.

He said embryo donation is rare, with only 77 babies born from the IVF process last year.

The Thomas and Argells families are evidence of a positive scenario where a donor couple has been able to keep in touch with their other child, enabling long-term contact among all of the genetic siblings.

However, not every case has had an ideal outcome.

Ms Parker agreed to donate her embryos to give another couple the gift of a children.

The chosen couple had agreed the kids would see their genetic siblings once a year and exchange photos.

Two of Ms Parker’s three embryos were implanted in the recipient and she told the IVF clinic she had miscarried but did not return for the third.

Unable to contact the woman and out of curiosity, Ms Parker looked her up on Facebook to find herself face-to-face with a child who looked like her son.

“We had heard the good stories and how great it could be,” she said.

“But he’s just been taken. I trusted her and I trusted the system.

Ms Parker called for legislation that better protects the rights of these children born from donor embryos.

“[IVF] is a billion-dollar industry and yet the rights of the people created from it seems to be their last priority.”