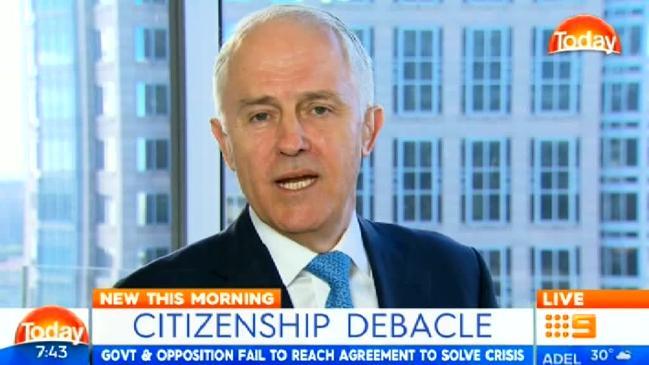 “I am a good man in a crisis,” Prime Minister Malcolm Turnbull has declared, uttering the word politicians usually try to avoid.

He was defending himself after Today Show host Karl Stefanovic accused him of ‘waffling’ during a morning television interview that infuriated the Prime Minister.

After being goaded during the interview, Mr Turnbull took the bait and accused the Channel Nine host of being patronising.

As the citizenship crisis drags on, Mr Turnbull has accused Bill Shorten of exploiting the issue for political gain.

A meeting between the two leaders ended Wednesday without agreement on how to ensure that all members of parliament are eligible under the constitution.

Anyone a body language expert? pic.twitter.com/v7KRKJG4lB

Yesterday Mr Turnbull described it as a constructive meeting.

“I make no criticism of Mr Shorten whatsoever in this regard, he wants to get further advice and consult with others,” he said.

But today he changed that view and accused Mr Shorten of not being “fair dinkum”.

“He wants to exploit this issue, he wants to prolong it, he doesn’t want to resolve it,” Mr Turnbull told Channel Seven. “He certainly didn’t come to sort it out.”

He added later, in the Channel Nine interview: “I sat there with my iPad for two hours with him and I could not get him to specify what changes he wanted.

“He said he had to get more advice, he had to consult someone.

“I thought he was the Leader of the Opposition.”

“I think he is demonstrating that he is simply diminished and desperate,” Senator Wong said.

She said Labor had been clear about the changes it wanted to Mr Turnbull’s proposal on citizenship.

The Opposition wants the matter sorted out by December 1, not later in the month.

And she said it should be widened so that politicians had to give more details about their ancestors to ensure there was enough information to tell if they were eligible.

Mr Turnbull leaves Australia today for a series of international meetings, including one with US President Donald Trump.

In the antagonistic pre-departure interview, Stefanovic said Mr Turbull was bogged down in detail and questioned whether his Government would survive.

“I can assure you that is what I am doing, I am going to APEC today,” the Prime Minister said.

“Everyone else gets frenzied particularly in the media. I am very calm.”

Stefanovic pushed again: “The perception is you are supposed to be running the country but you can’t even run your own party.”

“Karl, that is nonsense,” Mr Turnbull shot back.

“Look at all the big issues we have dealt with recently, you know the same-sex marriage postal survey … the National Energy Guarantee that’s got overwhelming support in our party.”

‘You are waffling’: Karl Stefanovic takes on Malcolm Turnbull