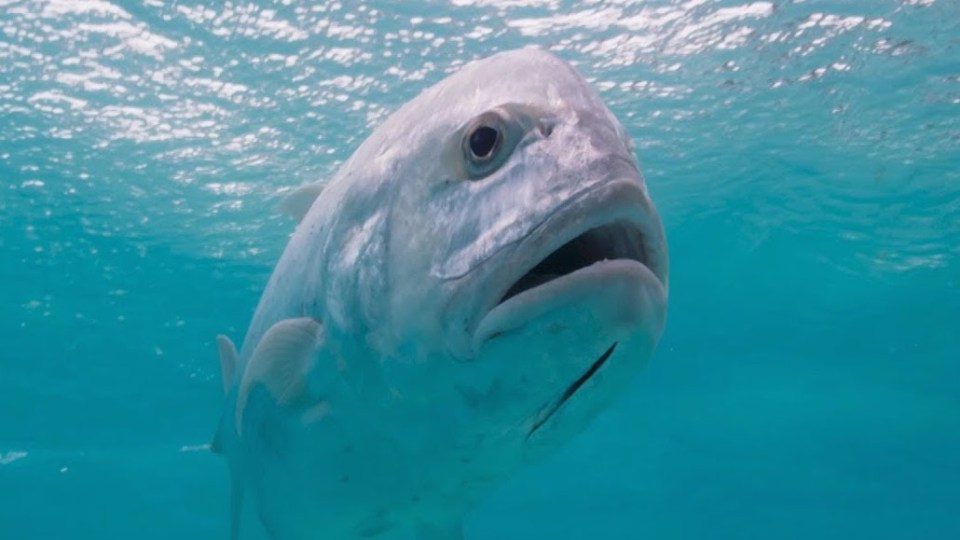 Turns out sharks aren't the only sea creatures we should be scared of. Photo: BBC

It’s a given that every nature series British icon Sir David Attenborough produces will feature one nail-biting moment of high drama.

And this year’s Blue Planet II has a hunter-prey shot that may top them all.

This time, on Blue Planet II  – which premiered in Britain on October 29 to an audience that peaked at 10.6 million, smashing perennial favourite Strictly Come Dancing – it was fish versus bird.

The bird came off second best.

During four years of filming, cameras captured a giant trevally leaping from the water like a missile to grab and eat fledgling terns in a lagoon on an atoll in the Indian Ocean.

According to Attenborough, the young birds have learned to avoid dangerous waters, which has forced the predatory fish to “up their game”.

“There is a fish here that amazingly has a brain capable of calculating the air speed, altitude and trajectory of a bird,” he explained.

The Nine Network picked up the Australian rights to Blue Planet II from BBC Worldwide but is yet to announce a screening date for the sequel to 2001’s Emmy-winning hit, which aims to capture what lies below the planet’s waves.

Instead of helicopters, light drones with high-definition cameras were reportedly used for aerial shots. Advanced equipment allowed cameramen to sit silently and watch the natural drama with no bubbles or disturbance.

Narrator Attenborough, 91, also wrote many of the show’s scripts and travelled to the locations where he could.

He said while filming was a triumph, it was also “tragic” at times, particularly the sight of bleached coral reefs.

“We are showing how the seas are changing and what an impact that’s having on the rest of the inhabitants of the sea and ourselves,” he told The Telegraph.

Of all the places he has visited, he has a soft spot for Australia: “I’d go back tomorrow if you’d give me the chance, to places on the Great Barrier Reef,” he told Nine News.

The reef features in Blue Planet II as the home of the Tusk Fish, which were observed using coral to open a clam for food – the first evidence fish can use tools like humans do.

Critics lined up to praise the series, with The Telegraph calling it “a major new jewel”, and Prince William seemingly revelling in it at the London premiere screening of the first episode in September.

But the wildlife franchise has not been without controversy.

In June, after the racer snakes scene filmed in the Galapagos won a BAFTA for must-see moment, the BBC denied reports suggesting it was faked.

There were claims more than one iguana was filmed and the scenes were then stitched together, but the BBC said only one animal was chased and other iguanas were used for close-ups.