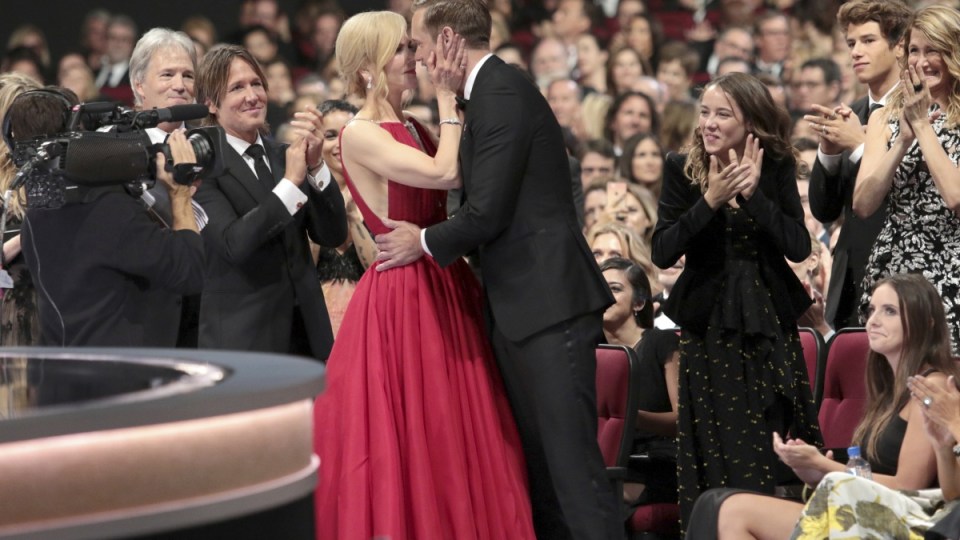 There were milestones made, surprise appearances, and our Nicole took out a top award at an Emmys that applauded shows about women and strong female leads.

Here are some of the best bits of the 2017 awards.

1. All three major awards went to stories about women

Best drama series went to The Handmaid’s Tale, a story about a group of fertile women living in a dystopian future where most have become sterile.

Best comedy series went to Veep, an Emmys favourite that pokes fun at the challenges faced by women in politics.

And best limited series went to Big Little Lies, a series born out of a desire for better roles for actresses, which takes a confronting look at domestic violence.

Yes, this year’s Emmys was a big win for women. And it didn’t stop there.

Handmaid’s Tale director Reed Morano became the first woman in 22 years to win the Emmy for best directing for a drama series. Only two women had previously won that category.

Lena Waithe became the first African-American woman to win the award for best writing for a comedy series, for her work with Aziz Ansari on Master of None.

And Veep‘s Julia Louis-Dreyfus became the first performer to win six Emmys for the same role.

We were all gunning for Nicole Kidman to win the top gong for her role in Big Little Lies.

She thanked the show for shining “a light on domestic abuse”.

“It is a complicated, insidious disease,” she said.

“It exists far more than we allow ourselves to know.”

In her second acceptance speech she said there needed to be, “more great roles for women please”.

Actor, singer and director Donald Glover became the first African-American director to win an Emmy for a comedy series for the show Atlanta.

But he couldn’t have been more humble in his acceptance speech, when he credited his success to his many directing mentors.

“I’ve been lucky to have worked with very talented people over the years,” he said in his backstage interview.

And on making history?

“I’m glad I was able to make history, but that’s not what I was trying to do. I’m trying to make the best product,” he said.

The Late Show host didn’t hold back in his comments about Donald Trump, and dedicated entire portions of the night to roasting the US President.

That included a monologue about Mr Trump missing out on an Emmy, and a surprise appearance from former White House press secretary Sean Spicer, complete with his own podium.

Colbert kicked off the skit with:

“Of course, what really mattered to Donald Trump is ratings,” he said.

“You’ve gotta have the big numbers.

“Unfortunately tonight we have no way of knowing how big our audience is. Is there anyone who can say how big the audience is? Sean, do you know?”

“This will be the largest audience to witness an Emmys, period,” Spicer announced from a podium titled ‘The Emmys – Hollywood’.

“Both in person and around the world.”

The skit was in reference to the now infamous comments he made following Mr Trump’s inauguration earlier this year.

Actress Jackie Hoffman made headlines for both her on-camera reaction and Twitter response to losing the Supporting Actress award to Laura Dern.

The Feud star appeared to yell, “Damn it” as the camera flashed on her during the announcement.

Hoffman then went on to write some controversial tweets.

Laura Dern had famous parents. Forgive me for being from real people #elitism #Emmys2017

But she assured her Twitter followers her tweets were meant to be a joke.

I hear the media actually taking my reaction seriously? Are you kidding me?

Baldwin scored the award for Supporting Actor in a Comedy Series for his portrayal of the US President on Saturday Night Live.

“I suppose I should say, at long last Mr President, here is your Emmy,” he said in his acceptance speech.

He went on to hint the role had affected his personal life.

“You put that orange wig on, it’s birth control, trust me,” he said.

7. We finally got to hear from Emmy

It took 69 years, but we finally got an interview with Emmy herself (who knew she had such a strong resemblance to Outstanding Host of a Reality Program winner Ru Paul?).

So, what did she have to say?

We found out she dated Oscar for a while, but had to break it off because she, “just couldn’t trust a man who’s naked all the time holding a sword”.

She also advised winners to avoid saying how heavy she is.