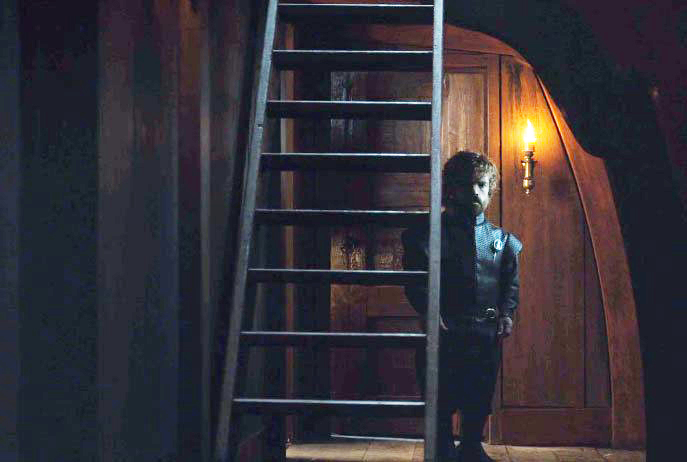 Shadow love: Is a smitten Tyrion the most likely to betray Jon Snow? Photo: HBO

To stand a chance at winning the Game of Thrones, all you have to do is keep a permanent Night’s Watch on your own back.

Betrayal is at the black heart of almost every major victory. And yet, one skin-crawling, unspoken shot in the final moments of ‘The Dragon and the Wolf’ suggests that the biggest betrayal of all is yet to come.

It was there, too, at the end of that series when Daenerys Targaryen trusted a witch and lost her lover Khal Drogo to dark magic.

It was in play when Tywin Lannister conspired with Walder Frey to slaughter the Starks at the infamously bloody Red Wedding and again when a desperate Stannis Baratheon sacrificed his own daughter to no avail to Melisandre and her Lord of Light in his failed attempt at securing the Iron Throne.

Betrayal came thick and fast in the final episode of season seven, though for once it wasn’t just the bad guys benefitting.

Yes, there’s Cersei’s least shocking betrayal ever. Promising to send her armies north to fight alongside the coalition of the living against the Night King, who brought down the wall at East Watch with ice dragon Vizombieon, she instead sent Euron to fetch mercenaries from Essos to fight whoever survives. Jaime was sent packing too.

Then there was betrayal at Winterfell. Despite everything this series has suggested with the weirdness of the Addams Family Stark, ninja Arya did not get stab-happy with sister Sansa’s face while emo Bran watches on uncaring. Nope. Rather Littlefinger finally got it as the Starks stood together as a wolf pack and executed him for his many betrayals.

Does Tyrion’s heart burn for the mother of dragons?

Still, the real betrayer we have to worry about comes like a crossbow bolt out of the blue. Beware, Tywin-slayer Tyrion!

While we finally got the flashback we need to confirm Jon is the rightful heir to the Iron Thorne, real name Aegon Targaryen, the man formerly known as Snow was falling into bed with his aunty Dany.

And who is standing creepy stalker style in the shadows of the hall outside, all darkly furrowed brow, but Tyrion?

Think about it. Since fleeing King’s Landing and falling in with the Dany gang, he’s successfully blocked her would-be suitors Ser Jorah and Daario. He even begged Dany to leave Jon to die instead of flying north last week.

Tyrion also declared Dany “the most important person in the world”, and begged his psycho sis Cersei to play nice with her.

Don’t forget that Tyrion was willing to kill his lover Shae and his own father Tywin when they got freaky behind his back.

Could it be that the biggest threat to Jon’s life is a stab-happy Tyrion?

We’ll have to wait at least a year to find out.

The worst betrayal is yet to come on Game of Thrones