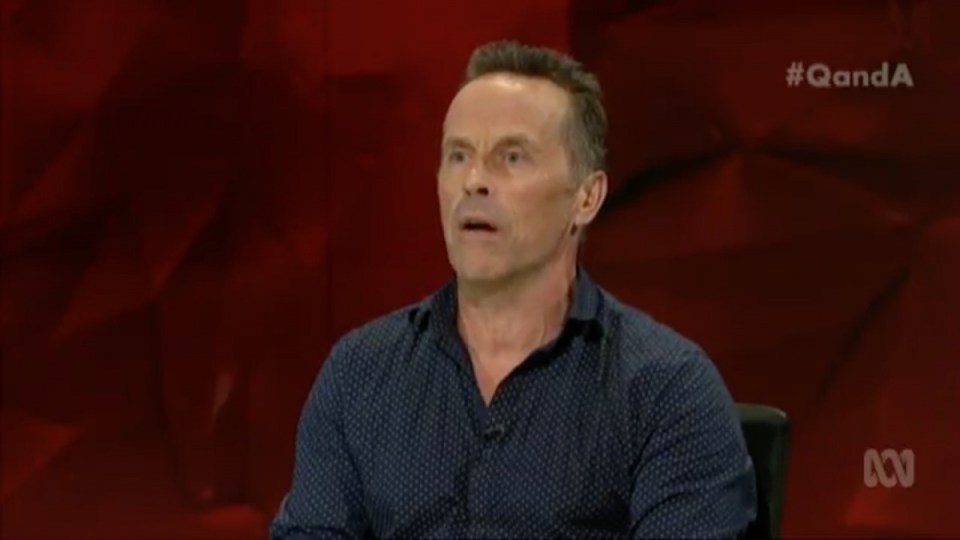 The iconic musician’s frank assessment came after a Hanson supporter asked the Q&A panel on Monday night how the western world should respond to the “threat of Muslims worldwide to establish a worldwide caliphate”.

“I think Pauline Hanson identifies that clearly there is a problem and that it must be addressed,” the female One Nation supporter said.

“And I think that’s very important, as it’s something other politicians haven’t done.”

Her standpoint prompted Mr Seymour to attack One Nation and its policies.

“When one particular politician stands up and deliberately cultivates hatred in the Australian community, what she’s doing is deflecting your attention away from what she’s really offering politically. It’s what’s on the rest of her policy agenda you should be looking,” he said.

“I think One Nation is completely bogus. I think it doesn’t really have a meaningful political agenda. It is not a party that’s capable of governing this country.

“And she’s using Islam as a means of deflecting your attention away from all the other policies she has on offer like a two per cent flat tax and abolishing the GST. Really? She seriously thinks that’s going to work?”

.@_MarkSeymour thinks Hanson is deflecting you from bogus policy with her hatred. @Peterhac says we need Islam in the conversation #QandA pic.twitter.com/yvoFQ8uaUg

The audience member also insisted that she had heard statements “coming out of Lakemba mosques”, that these Muslims want to “destroy Australia”.

International security expert Lydia Khalil quickly squashed the idea and said that terrorists like the Westminster attacker – who was born in Britain – do not commit acts simply because of religion.

“We take a look at the Westminster attack, we can’t ignore he spent time in Saudi Arabia before he committed these attacks, he spent time in prison, a known incubator of this ideology,” Ms Khalil said.

“If you take a look at it like a case by case basis, there are very specific and idiosyncratic reasons why individuals commit acts of violence which have nothing to do with religion. They’re marginalised. They’re on the fringes of society.”

We must accept terrorism in modern life

In the wake of the London terror attack in Westminster and the Lindt Cafe siege in Sydney, we must accept terrorism as an inevitable part modern-day society, the panellists said.

The panellists resoundingly agreed with NSW Liberal leader Kerry Chikarovski saying we must accept terrorism is around us.

Businessman-turned-writer Peter Holmes à Court echoed the statement, calling for some serious conversation from politicians on terrorism, saying US President Donald Trump was the only leader willing to make a stand.

“Maybe we’re starting to get serious about dealing with something which I think has changed us,” he said.

“I think our society is fundamentally different because of terror and our approach to refugees, and people being afraid of refugees comes a lot from their fear of the society we live in today.”

Ms Khalil said that according to her research, the gains on the ground against terrorists fighting in Syria and Iraq increases the threat of localised terrorist attacks within Western nations.

“We’re seeing a strong correlation between losses in Iraq and Syria and an uptick in external attacks in the West particularly,” she said.

“For a long time you had Islamic State telling people, ‘come to the caliphate, come fight in Iraq and Syria’. As they’ve been losing they’re saying, ‘Stay at home. Carry out attacks at home’.

“The blowback of that we’re seeing throughout the international system.”