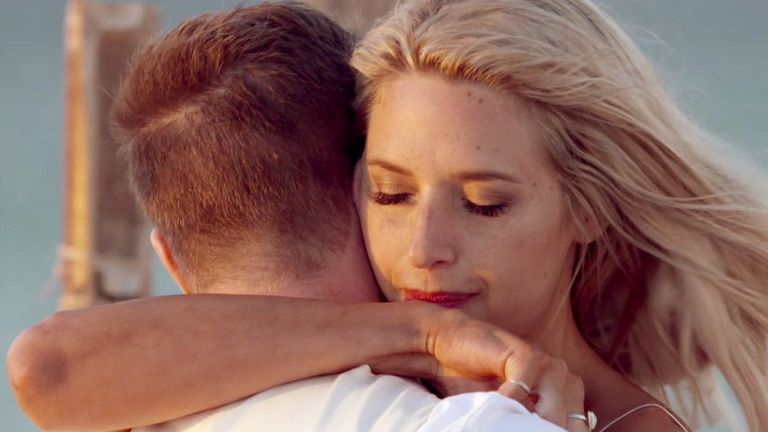 Faux bride Michelle has been accused of using groom Jesse to extend her 15 minutes of fame. Photo: Nine

Fans of Channel Nine reality series Married at First Sight are up in arms after Adelaide fruit seller, Jesse Konstantinoff, was dumped by his “wife” Michelle Marsh on Tuesday’s episode.

The 31-year-old was a popular contestant on the series, which sees complete strangers enter into non-legally binding marriages as part of a social experiment guided by relationship experts.

After eight weeks together living as a married couple, contestants are given the opportunity to continue the relationship at a vow renewal ceremony.

Unfortunately for Jesse, Tuesday night’s episode saw Michelle confess she was unwilling to continue the relationship in anything more than a friendship capacity.

Has Jesse missed his chance to be more than friends with Michelle? #9Married pic.twitter.com/SqVK2FOlCg

“I do want you in my life forever. But not as your partner,” Michelle, 31, told him.

“It’s not losing something but gaining a forever friendship.”

Jesse’s visible disappointment had viewers sympathising with him, and criticising Michelle for “leading him on” to extend her “15 minutes of fame”.

They also speculated Michelle stayed on the show to remain close to her twin sister Sharon, who is also a contestant on the show.

Poor Jesse, you dodged a bullet, she knew ages ago how she felt and she dragged you along #9Married #15minsoffame

Appearing on the Today show on Wednesday morning, Jesse defended his former faux spouse, insisting leading him on was “not her intention”.

“There was a part of me hoping she’d want to continue things outside the experiment, but at the end of the day I need to respect her decision and move on,” he told hosts Lisa Wilkinson and Karl Stefanovic, adding that he and Michelle had remained friends.

Lisa declared Jesse “Australia’s most eligible bachelor” and asked him what he was looking for in a partner.

“I suppose someone who’s down to earth and easy-going. Someone who’s not high-maintenance,” he responded.

The fourth season of Married at First Sight has been a huge ratings hit for Nine. Tuesday night’s episode attracted a peak audience of 2.132 million people.

As a result, the network is attempting to prolong the show’s success by keeping it on air and refusing to reveal a finale date.

Entertainment reporter Peter Ford on Tuesday speculated as to why Nine was dragging out the show’s conclusion, suggesting Nine was attempting to compete against rival Seven’s ratings stalwart, My Kitchen Rules.

“[W]hile My Kitchen Rules is still on, they’re going to go back into the editing room all that stuff they threw on the floor they’re going to get sticky tape and pull it all back together,” he told The Kyle and Jackie O Show.

“They’re not going to let that show go because it’s one of the best decisions they’ve ever made.”

Earlier this year MAFS managed to beat MKR in the ratings – the first time in eight seasons that the reality cooking show came second to a rival free-to-air program in that time slot.