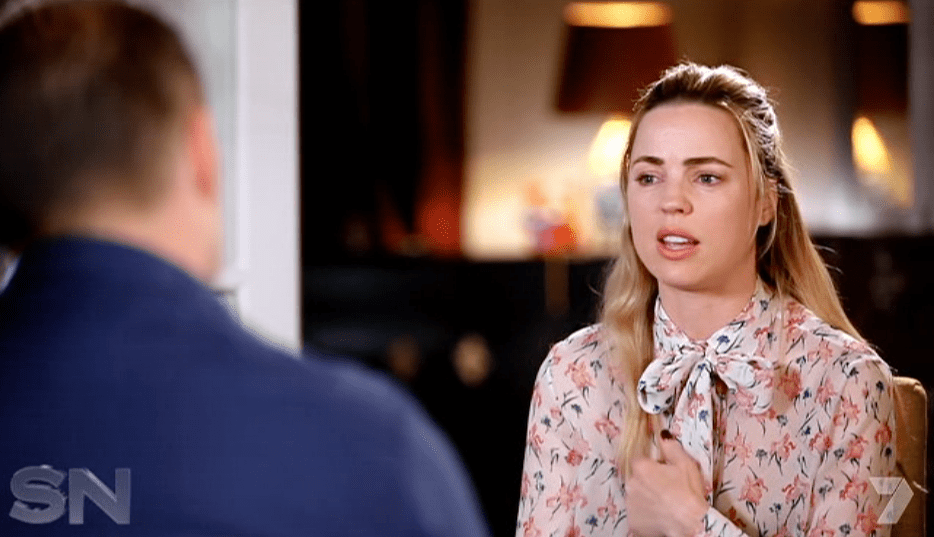 Melissa George has spoken for the first time since her Sunday Night interview. Photo: Channel Seven

The television and film star claimed the fight began after Blanc returned home late in September last year and woke her up, as he often did. She said she “yelled” at him.

“Then it escalated into a 27-minute fight,” George claimed in her graphic account.

“It started with him on top of me with my arms locked above my head.

“I used my feet to get him off me.

“I wet the bed, I wet the floor. I just went into a crazy moment of like, I’m in deep shit and so I just started to fight for myself, which made him more angry, which made me more angry.

“He pushed me into the door and then struck my face and I hit the wall and I fell on the floor, and I was just out. He stood over me and said ‘now you are a real actress’.

“He went into the bathroom and when he came out I threw up and said you are not leaving until I call the police. Then he hit my mouth.

“Then after all that, he grabbed my head and smashed it into the metal thing where you hang the coats.

“I scratched him, I tried to fight for my life.”

After Blanc went to sleep, George said she called an Uber to take her to the police. They later took her to hospital.

Photos reveal marks around her wrist, bruising on her back, bottom and hip, swelling on her face, a split lip, a lump on her head. She was unable to move her neck.

Blanc was arrested but, in a twist, both were found guilty of assault. He had to pay her 1000 euros and she had to pay him one euro.

With their relationship over, an equally vicious custody battle involving their two children ensued with the former couple sharing custody in France.

George now says she’s trapped in Paris, unable to work there because of her visa, or elsewhere without leaving her two boys – Raphael and Solal – behind.

She said she was telling her story now to get Australia’s support for her custody battle – even though she has made headlines for her apparent disdain for her country in the past.

“I know that there will be people writing in saying ‘ha ha, watch out what you wish for’ so I understand all of that. I take full responsibility for that.”

Sunday Night didn’t speak to Blanc, but he has publicly denied her claims via his lawyer Jacqueline Laffont in a statement to the Daily Mail Australia.

“The Paris Court’s decision consisting of a shared custody of our young children was based on very long and various social worker’s investigations, as well as psychological examinations,” it said.

“That does not prevent Ms George from working, as she’s free to come and go to sets all over the world as she always did.

“Regarding the supposed violence against Melissa George, I strongly contest it and have thus filed an appeal against the judgment, which is not final,” the statement went on.