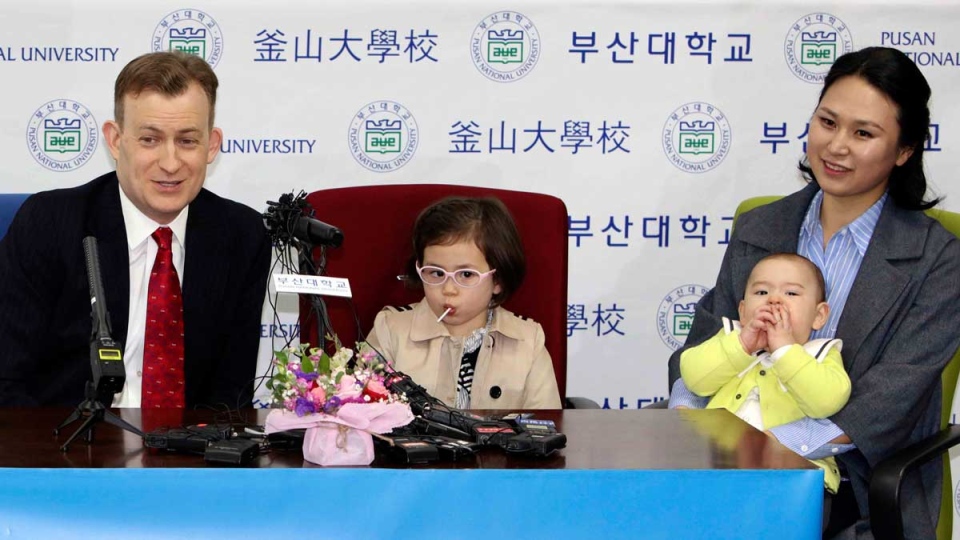 Robert Kelly and his wife, Jung-A Kim, have two tiny celebrities on their hands.

After interrupting their father’s live interview on the BBC and becoming global internet sensations, Professor Robert Kelly’s adorable kids have managed to steal the limelight yet again.

Marion, 4, and James, nine months, are being hailed as style icons and even future world leaders after appearing alongside their parents at a media conference in South Korea on Wednesday.

Professor Kelly and his wife, Jung-a Kim, answered questions about the viral video of their young children bursting in as their dad attempted to discuss geopolitics via live video link.

Jung-a Kim’s desperate attempts to salvage her husband’s interview by dramatically removing the children were the icing on the cake.

Asked why the wonderful debacle resonated with so many, Professor Kelly told reporters it captured the realities of being a working dad.

“Normally I hope that my children don’t come in and I can get more work done but I want my children to feel comfortable coming in and approaching their father,” he said.

“We just don’t have these strict rules, I can’t lock my kids out of certain rooms.”

During the media conference, Marion, who was sporting a very stylish trench coat and pink glasses, munched on a lollipop and looked entirely disinterested by her parents’ musings.

Meanwhile, baby James was similarly distracted by a snack, wearing a citrus-hued jumper with a statement collar.

Predictably, the internet went wild for their latest appearance, with many hailing Marion as a “style icon”, as some fashionistas even went so far as to share guides for how to “steal her look”.

The little girl was also applauded for her “sassy as hell” personality and devil-may-care attitude, as enamoured social media users suggested she could do anything she wanted – from being the next Doctor Who, to President of the Earth, to secretary-General of the United Nations.

Below, we’ve pulled together five of the funniest social media reactions to Marion and James Kelly’s latest outing for your enjoyment.

Citizens of Earth. Bow to your new overlord. pic.twitter.com/ZGHbO2znvA

If she isn't President of Earth by the time I'm 80, I'll be bitterly disappointed. pic.twitter.com/f5qEfaaPT7

This is how I'm walking into everywhere!#BBCinterview #LikeABoss #FridayVibes pic.twitter.com/DQVWxwaoMM