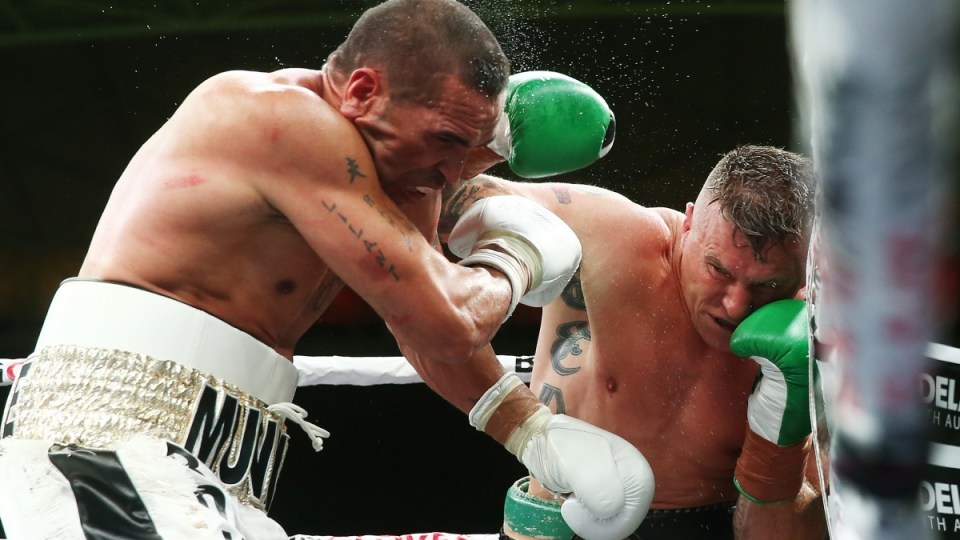 People who illegally live-streamed the Green-Mundine bout could be in for an unexpected blow. Photo: Getty

Foxtel has Brisbane man Darren Sharpe on the run for what it calls “stealing”.

The newly proclaimed “Aussie legend’’ is lawyering up and has appealed to his mates for a fighting fund.

As of 11pm Saturday, 197 people had donated $2500 to his crowdfunding campaign to cover legal costs.

Mr Sharpe is one of two men Foxtel has said it will prosecute for live-streaming Friday night’s boxing bout between Anthony Mundine and Danny Green via their Facebook accounts.

Foxtel issued a statement on Saturday promising “appropriate legal action will be taken”. 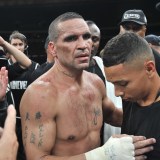 Anthony Mundine: I was robbed 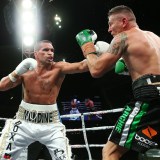 “What occurred last night on Facebook is stealing and it’s harmful to the future of boxing and live sport,” the statement said.

Mr Sharpe’s broadcast was watched by 110,000 before Foxtel shut it down.

“I didn’t mean for any of this to happen,’’ he told The New Daily on Saturday via Facebook messenger.

He’d paid $59.95 for a one-off pay-per view and figured he could share it with some of his mates, as if they were visiting his lounge room – which some say they were, in a virtual sense.

Those friends weren’t many, he said. Sharpe told The New Daily that at the start of the night, before he started live-streaming, his Facebook friends numbered “well under 100”.

He figured there weren’t many people to reach, but it quickly went viral.

Brett Hevers, of Davistown, NSW, is the other man facing up to five years in jail or a substantial fine under the Copyright Act if convicted.

He tells a similar story of sharing with mates – only to make thousands of new friends in a short amount of time.

Both men are feeling the heat and yet sheepishly defiant.

Mr Hevers posted on his Facebook page, Saturday afternoon: “If anyone is or knows any lawyers feel free to contact me as Foxtel have indicated that they will be taking legal action feel free to tell them how you feel on their Facebook page…’’

He, too, has started up a Crowdfunding site and has posted his Paypal details for friends who want to help out.

One of Mr Hever’s friends posted that Hever’s livestream reached half a million people on Friday night. Another friend put the figure at 160,000. The New Daily could not confirm the correct figure.

It was Mr Sharpe who gained the media’s closer attention. Huffington Post described him as “an overnight sensation”. Gizmodo said he was “the most Aussie guy ever”.

During his live stream, Mr Sharpe also recorded a phone conversation purportedly between himself and a Foxtel rep, the veracity of which has not been confirmed.

The conversation was posted on YouTube, and has been widely quoted from in the national media.

It begins with Sharpe saying: “So … you want me to turn off the Foxtel because I can’t stream it.’’

The alleged Foxtel rep responds: “No, I want, I want you to stop streaming it on Facebook. You can keep watching it at home, there’s no dramas with that at all, just don’t stream it on Fox.”

Mr Sharpe responded: “I’ve got 78,000 viewers here that aren’t going to be happy with you mate … I’m not doing anything wrong, mate. What can you do to me.’’

As the Foxtel man tries to explain he’d posted warnings on Mr Sharpe’s Facebook page that Mr Sharpe is committing a criminal offence, Mr Sharpe pipes up excitedly, because his crowd size has surged to 91,000.

Eventually, however, Mr Sharpe cuts off his live feed.

In fact, he and Hevers only managed to livestream the undercard match – albeit to a huge crowd.

Foxtel intervened and took them offline before the main event started.

Foxtel boasts on its website of “a dedicated team of investigators who work closely with State and Federal police to prosecute those who are involved in enabling unauthorised access to subscription television broadcasts”.

‘This is stealing’: Foxtel smacks down Facebook live streamers