Beyond the PR spin. The X Factor is not doing its contestants, or its viewers, any favours.
analysis

The interminable nature of The X Factor Australia finale has allowed me to spend time online comparing original performances with X Factor covers.

In the end I was left wondering what on earth the show thinks it’s doing to its finalists – and even its audience.

None of my criticism is aimed at the contestants. It belongs directly and completely with the producers and with Channel Seven. They are selling an impossible dream.

I watched the start of this series, full of hope and excitement.

I thought there was talent that over the gazillion weeks of the series would be developed and nurtured, creating a potentially exciting new star of the likes of Jessica Mauboy and even judge Guy Sebastian (both products of Australian Idol). 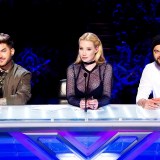 But as I took a closer look at how Channel Seven promotes the top four contestants and their best songs, I realised what a false hope the show was promoting.

Every song they had to cover had been sung originally by powerful, compelling voices and there’s little chance that the finalists could come close without intensive coaching and incredibly hard work, and I’m not sure that has happened on The X Factor Australia.

Amalia – the 15-year-old schoolgirl who, according to Channel Seven, has a voice that “can soar, move, inspire and haunt” – has Faded as her top song from the series.

Faded became a major hit around the world thanks to the extraordinary voice of Norwegian singer Iselin Solheim. And as good as she is, Amalia has nowhere near the power or experience of Solheim.

On Sunday, she did her best with another tough song, Adele’s Set Fire to the Rain. Why such tough songs?

Vlado’s top song from the series to date was a contemporary No.1, Closer, by American DJ duo The Chainsmokers.

As with his Sunday night performance, he did a good job. But I can’t see how Vlado would end up, like the Chainsmokers, at No.1 in the USA, despite Channel Seven’s claim that his “ability to whip us into a frenzy is unrivalled”.

Channel Seven says Davey Woder, 34, is a “man who speaks to the people”.

And he’s no Robbie Williams either. He gave the iconic Angel duet with Williams on Sunday a red-hot go but was outclassed – hugely outclassed.

Davey Woder, though seems the most level-headed about the whole experience. Until X Factor he’d only performed his own songs, never covers and, fingers crossed, that could offer him the best future.

A highlight of Sunday night was 16-year-old Isaiah Firebrace’s duet with Jessica Mauboy, but how can he come close to Sam Cooke’s iconic performance of A Change is Gonna Come – the song that became the soundtrack to the US Civil Rights movement.

And yet Channel Seven’s publicity machine told us this song was his best for the series and that his “soul-soggy” voice brought the audience to tears when he tackled the Cooke hit. Really?

The four finalists have had the full mega-star treatment. Screaming crowds at their schools, local shopping malls or workplaces. Rides in helicopters and limousines.

And, on Sunday night, the judges were effusive about absolutely everybody.

Maybe it’s better if you are there, but at home it’s as if we are in a good concert, listening to good but not brilliant singers.

So now the voting is underway, but what happens after Monday night’s finale when the producer-generated screaming crowds and the judges’ adulation disappears?

Will the contestants just accept their 15 minutes of fame and move on?  I can only hope so.

The X Factor and its impossible dreams