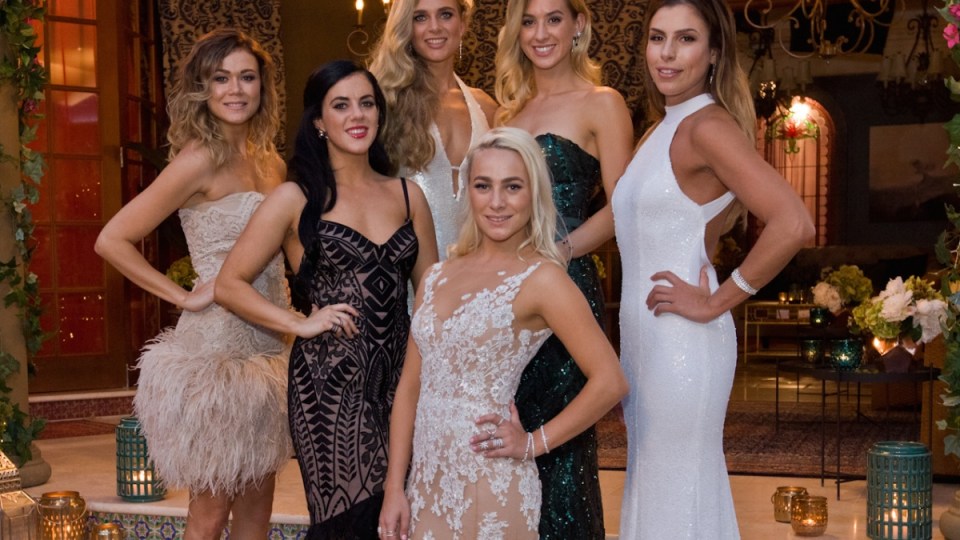 One of these women has already captured Richie's attention. Photo: Network Ten

As much as the crafty producers will try to tell you The Bachelor is a show about love, it’s really a ruthless competition – and one contestant is already leading the pack.

On Wednesday night’s premiere episode of the Network Ten dating series, young women from around Australia were paraded in front of one man – in this case, West Australian ropes technician Richie Strahan, 30 – like prized ponies.

Each made an attempt to brand themselves on Richie’s consciousness, some more successfully than others. Honourable mention must go to Gold Coast native Noni, a woman so in love with bacon she had the word tattooed on her body and presented Richie with a bouquet of roses made out of the porky breakfast staple.

Resident weirdo Eliza also deserves a shoutout for her ill-advised decision to sing a song – a cappella – for Richie, who was rendered so uncomfortable all he could utter was “holy smokes”.

Also fighting for the title of “the kooky one” was 26-year-old Janey, a children’s entertainer who listed her interests as “clouds, mermaids, glitter and fairies”. She said she was looking for her Prince and promptly ditched her shoe for Richie to pick up – her own painstakingly manufactured Cinderella moment. Richie hid the rising terror in his eyes and told her she was “adorable”.

The remainder of the introductions oscillated between nervous giggling and unbridled sexual energy, usually on the part of the women who were ecstatic to see Sam Frost’s ‘Ken Doll’ cast-off back on the market (Richie made it to the final three on season one of The Bachelorette).

A direct quote: “He’s got good alignment with his teeth, he’s a good size … I could totally eat that face, yeah.”

After the introductions were made, the fillies were then led to the mounting yard (aka the mansion) to size each other up. There the inevitable bitchiness and snarky comments abounded. Meanwhile, an unperturbed Eliza was set on singing her way through the social minefield.

In among it all was Richie, who possesses a strange kind of oblivious bemusement and seems genuinely surprised all these women want him. Clearly no one has told him that’s the point of the show.

Through the cloud of desperation, however, emerged a clear favourite – 24-year-old Alexandra Nation, whose decision to read Richie a heartfelt poem gave her an edge Miss Bacon and co were lacking.

But Alex had a secret, one she quickly divulged to Richie lest the hawk-eyed, fake-tanned secret service watching her every move did it for her.

“I’m a mum,” she revealed, barely managing to tell Richie she had a five-year-old son named Elijah before another contestant swooped in to ruin the moment.

While token ice queen Keira was quick to point out that men don’t like kids, being a parent can be a surprising advantage on The Bachelor – last season single mum Snezana Markoski stole Sam Wood’s heart, despite the cynics.

Clearly Richie was unperturbed by the prospect of fatherhood because he awarded Alex the coveted white rose, giving her unfettered access to the bachelor’s private quarters and “an enormous advantage over the other girls”, in the words of host Osher Gunsberg.

Regardless, Keira managed to score her own rose, landing her a place on the next episode. So did WA girl Megan Marx, who is Sam Frost’s winning pick.

“She is one of the four or five girls that has had a promo made of her, right?” Sam said on her radio show, arguing that every winner so far has had their own pre-show ad dedicated to them.

That, or you could go with Keira’s logic: “Of course she [Megan] did [get a rose] – she’s got the biggest bazookas I’ve ever seen.”

Our pick is Sasha, the Russian girl who started randomly munching on her rose when she didn’t think anyone was looking. She’s a keeper.

All this cutting in can make a lady hungry y'know. #TheBachelorAU pic.twitter.com/jjXLFAQ70G