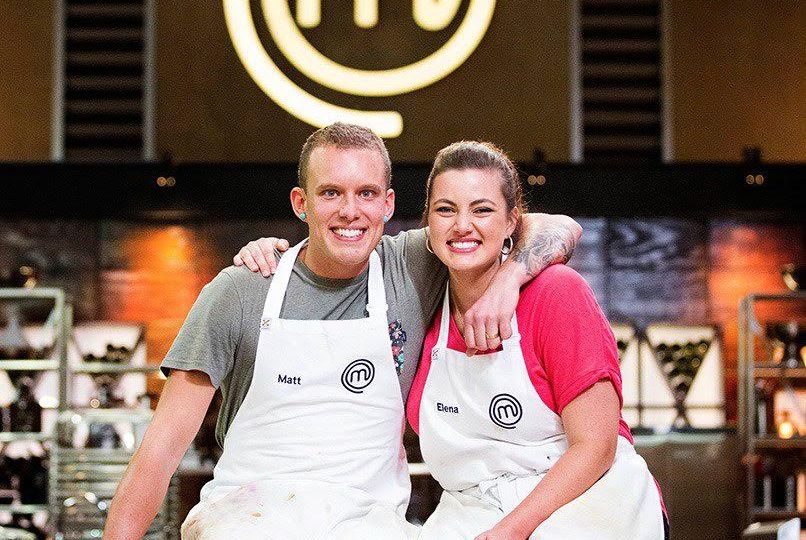 Matt and Elena made it to the final frontier of the reality cooking series. Photo: Network Ten

Not just any egg, but an intricately-constructed, 100-step, scientifically-processed concoction (dreamed up by the wonderful warped mind of Heston Blumenthal) that saw teacher Elena Duggan crowned winner of MasterChef Australia and earn $250,000 on Tuesday night.

But the other finalist, coffee roaster Matt Sinclair, received an unexpected $40,000 prize too and that should see him in the food truck he has always dreamed of.

He also got the love and adoration of fans on social media who, while accepting Elena won with an amazing last-minute dash, believed that Matt was the better cook throughout the rest of the series and was just a little bit robbed in the finale.

Totally shell shocked, hate the way 1 dish does it, Matt's a star, when I move to Qld I'll be at his food truck for sure .. #MasterChefAU

#MasterChefAU so upset that matt didnt win.. He deserved it so much! Im 100% sure he will make it far tho 😌💪🏻

Mind you, he did crack under the pressure of the egg (sorry!) and, at one point, Elena incredibly generously took time out in the closing minutes to help him work out what he was supposed to be doing next.

Even in the last 30 seconds of cooking in the #MasterChefAU Kitchen, there's always time for mateship & camaraderie.https://t.co/m0pZdcXzN7

And, because he ran out of time, he missed the last step and his egg just split into two parts. He sobbed into his wife’s arms that he wanted to go home.

Until then, he looked like he had the title locked away.

For the entrée, the two had to choose from a selection based on some of their favourite ingredients.

Matt goes straight for the quails and decides on a dish using charred corn, chorizo and a sherry reduced sauce.

All goes swimmingly until the judges ask if the quail legs are “confiting”. Matt’s face says it all. They are certainly not. So, he drops everything and gets them confiting – whatever that is.

Elena chooses to do Marron two ways and a key part of her dish is a Dashi-based Ponzu dressing but she quickly looks nervous and realises her Dashi reduction is far too bland when she tastes it.

By the first break, Elena has literally stopped in her tracks. Gary gently tells her to get a grip and Matt Preston shouts, “have you bitten off more than you can chew” at them both – probably not helpful.

Elena is first to be judged and, while the judges are nicely encouraging with comments on how well the Marron is cooked, they’re not that thrilled. Elena isn’t either – nor is she particularly happy with her score of 23 out of 30.

The judges actually love Matt’s entrée. You can see it in their eyes. He scores 26 and heaves a huge sigh of relief!

There are no rules with the main course. Just 75 minutes to wow the taste buds.

Elena is determined not to let herself down again with her nerves, not to be overcome by pressure and goes for lamb, aiming to create a dish that “warms you from the inside”.

Matt, meanwhile, is going for a crispy skin barramundi dish in a broth made from prawn heads and pancetta.

Matt goes into a spin … and looks traumatised. But, dammit, he decides to stick to his gut feeling and carries right on.

Elena runs out of time to finish her dish, but a brilliant improvisation with molasses makes it work. No panic this time and the judges are all blown away by her dish.

Matt is beside himself when he brings his dish out, knowing he has totally ignored Gary’s scepticism. When Gary asks him how he feels, Matt is moved to tears before he says “pretty proud”.

The judges taste his food and then Gary eats his words. “I’ve been proved wrong.”

Matt Preston: “This tastes like it has been the menu at a great French restaurant for 50 years.”

Then, for the first time in MasterChef history, two perfect scores – 30 out of 30 for each of them.

Time to further crank up the tension. Out come the families and EVERYONE is crying … particularly Matt because his parents have flown back from holiday in Italy. He just crouched on the spot and sobbed.

When you see your wife for the first time in a LONG time! #relationshipgoals #MasterChefAU pic.twitter.com/VpLSKAUbr1

And then comes the dreaded pressure test – the “egg”.

Matt and Elena look equally terrified and horrified. Matt asks “is it possible”. Heston encourages them. “I’ve seen what you can do and I know you can do it.

But can they? Elena is the first to make a mistake by adding one of the ingredients one stage too early and she has to start again.

“I can feel everything start to flood over me. Every emotion … I’m not going to break down … I’m damned if I’m going to stop now.”

But it’s not long before Matt realises he has a major problem. The key ingredient – the panna cotta – has not set and he, too, has to start that component again.

In the end, two eggs were duly delivered and Elena had come from three points down to take the crown by just two points.