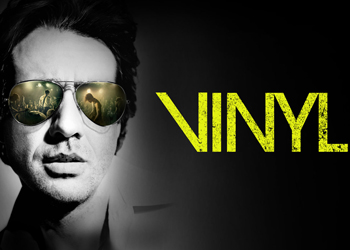 I feel a bit of a fraud for writing about why Martin Scorsese and Mick Jagger’s Vinyl HBO drama hasn’t made it to a second series. I only watched the first two episodes before bailing.

But most of the expected audience didn’t even bother to do that and those who did, didn’t stay with it for much longer than me.

Why? Because, despite the hype, two of the greatest names in movies and in music weren’t enough to make a great TV series and it was doomed almost from the start.

For those who missed it entirely, Vinyl is set in 1970s New York and, as the PR handout says it’s a “ride through the sex and drug addled music business at the dawn of punk, disco and hip-hop”.

He’s at the point of selling his almost bankrupt company to the Germans when his few remaining deals start falling apart.

Scorsese told the TV Critics Association the goal for Vinyl was “that music becomes part of the narrative, but the whole narrative is like a piece of music”.

Whatever that means in theory, in practice it means a disjointed, rambling script held together by music. And the action is SO slow, ponderous even.

What ends up on screen is a beautifully directed, music driven series of vignettes – from Richie’s career, past and present – of characters that are mostly unlikeable, coke snorting, sexist and relentlessly foul-mouthed.

There are exceptions, of course. Young “sandwich girl” Jamie Vine (Juno Temple) is a standout as she tries to find new and exciting acts to beat the talent found by the dull, lazy A & R team.

Despite its reported budget of $100 million, it launched in the US with lukewarm ratings of 1.1 million viewers, according to Nielsen data measuring live viewing and three days of delayed viewing.

That puts it in the ballpark of Bravo’s comparatively low-rent Girlfriends Guide to Divorce.

For the network responsible for blockbusters like Game of Thrones and Boardwalk Empire (also directed by Scorsese and featuring many of the same creative team as Vinyl) it must have been a bitter blow. The ratings never picked up.

Soon after the show was launched, HBO announced a second series but then everything hit the skids. Terence Winter – the Show Runner, one of the many Executive Producers and Co-Creator – left. “Creative differences” were cited and a new team was brought in.

But, in the end, HBO cancelled the second series.

Vinyl came out of a movie with the working title of The Long Play which Scorsese and Mick Jagger had been developing since 2000 and my hunch is they should have stuck with a potential two-hour blockbuster rather than attempt this 10-hour marathon.

Movies are what Martin Scorsese does best.

At one point in the first episode, Richie tells his company lawyer to get down to the Emergency Department to “get your head out of your arse”. If this maxim had been applied to this story, there would have been a cracker of a film.

A sad, moving, edgy film about what a shocking, even murderous world the entertainment business can be — of a man fighting to save his company and his life.

Now, that, I would have watched from beginning to end.