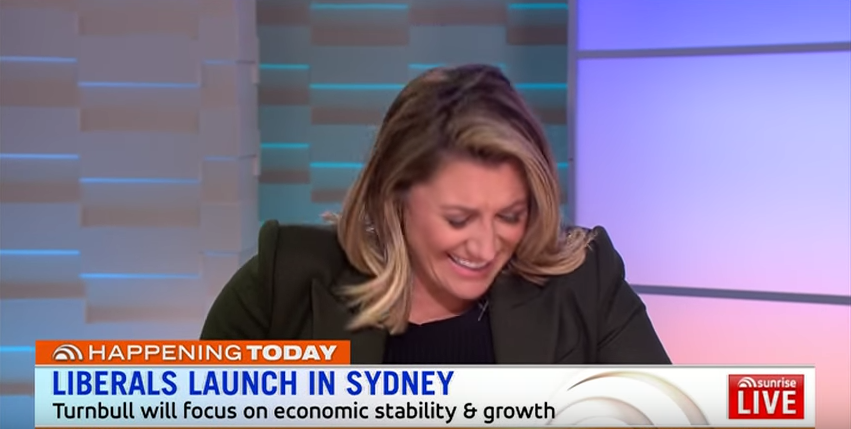 It can happen to anyone, but Sunrise newsreader Talitha Cummins handled a live television gaffe better than most on Sunday morning.

The hilarious slip of the tongue came when Cummins was attempting to introduce the next story on Channel Seven’s morning show.

Shocked at her own faux pas, Cummins tried again, but when the wrong word slipped out once more, she and the entire newsroom descended into hysterics.

Watch the hilarious gaffe below:

“Malcolm Turnbull is making his pig bitch,” said Cummins, before breaking into laughter on the live morning show.

Cummins, who is currently pregnant, managed to make light of the accidental slip with a self-deprecating joke.

“I think I’m going in to early labour … Look out for those pig bitches today,” she laughed, as her colleagues gave her a round of applause.

If Cummins’ ability to laugh at herself seems impressive, it’s probably because this isn’t her first live gaffe about an Australian prime minister.

The journalist has worked for Channel Seven since 2004, when she started her career in its Brisbane bureau.

Working her way through Seven’s ranks, Cummins eventually replaced Jessica Rowe on Sunrise Weekend in 2014, but not before another amusing slip of the tongue.

In 2012, Cummins was in the middle of a live cross about Sydney’s M4 East motorway being built.

“It’s a little bit early to get excited – Tony Abbott still needs to be erected,” said Cummins, before stumbling and trying to get the word “elected” out.

Suppressing laughter, Cummins looked down at her notes to gain composure, before eventually producing the correct words.

In 2013, Cummins went public about her struggle with alcoholism, saying non-stop nights of drinking had spiralled her into anxiety and depression.

“As you become more physically addicted, you need more and you don’t bounce back as well … you start getting things like really bad anxiety and depression,” she told More Than a Pretty Face in 2014.

At the time of the interview, Cummins was one year sober and said she had replaced alcohol with exercise.

Praising the support of her husband – personal trainer Ben Lucas – Cummins said both her personal and professional lives had improved.

“I have more drive and I want to be [at work] now as opposed to waiting to get home and have a drink.”