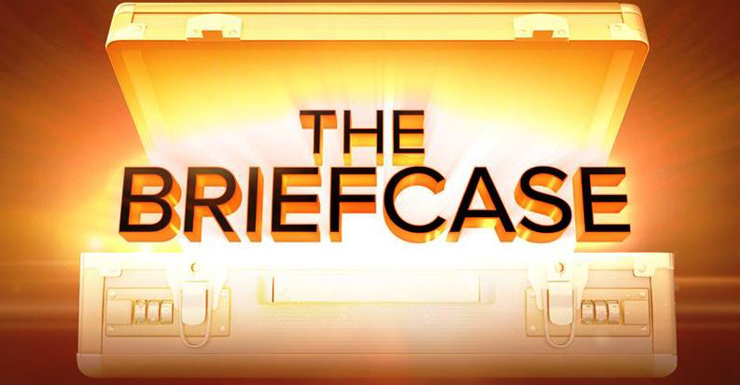 The participants have asked that we not judge them until we see the show.

Well, the first episode of The Briefcase aired on Channel 9 on Monday night.

My verdict? I felt physically sick in the first episode because judging is exactly what we, the audience, are asked to do.

For those who missed the first episode, two amazing families each receive a briefcase containing $100,000 on their doorstep, unannounced.

Both families have a desperate need for the cash. In the first episode, we meet Rod and Mandy McCracken and Jenny and Jim Carter and their families.

Mandy lost all of her limbs following a life-threatening attack of deadly streptococcal A bacteria and needs better prosthetic limbs and house renovations so she can get around. The Carters had lost their home and livestock to bushfires and need money to rebuild.

But, of course, there is a catch. This is formatted factual television after all – devised by the same company that brought us The Biggest Loser. They can choose to keep the money or give some of it to the other “deserving family” in the show. What they don’t know is that the other family also has the same amount of money and the same dilemma.

Over the three days, we follow their angst. The couples visit each other’s homes and explore their world. We hear what they would do with the money if they kept it and why they might give it away.

“The Big Reveal” follows. The couples meet and learn that they both had money to share. I start to feel quite ill as the tension builds.

Who’s going to give the most away? How will they all feel if there’s an imbalance? I imagine the social media disgrace. “Farmers rob, Disabled Woman. How could they?” Twitter would ask.

Thankfully, that’s not how it plays out here. Amazingly, each of the couples gives away every cent so each family ends up with $100,000.

In that sense, everybody won. Except, I would argue, the audience who are privy to this awful dilemma, being explored by people who are incredibly vulnerable.

I felt really troubled at the whole idea after watching it. And Twitter during the show backed me up.

Do Nine not realise just how cruel the concept of this program is? #TheBriefcase

Who thought parading around disadvantaged people was a good idea? What a morally bankrupt concept. #thebriefcase

Let’s take some vulnerable people and screw with their heads for ratings. Who thought this was a good idea for a show!? #TheBriefcase

Hate these radio/tv shows forcing people to choose between saving themselves or giving to others equally in need. Just awful #TheBriefcase

It doesn’t get any better

In the interest of not rushing to judgment, I watched the second episode.

Troy Hockley is a fencing sub-contractor (with irregular work) and his wife, Mem, runs the Mem Soul Food Charity for young women that she wants to expand. They have four children.

Kevin Richmonds had a sports construction business which failed and, rather than go bankrupt, he and his wife, Honey, opted to sell their home to pay sub-contractors. Now in their 50s, with two children, they are desperate to buy another home before it is too late.

“A home would give me the tools to be a real father,” says Kevin, despite Honey’s assertion that he has always been that.

While the Hockley and Richmonds friends urge them to keep all the money, this episode becomes a discussion about Greed versus Need.

Perhaps because their stories, while relevant and engaging, are not as heart wrenching as those of the Carters or the McCracken’s, it is easier to watch and there are times I feel genuinely moved at their compassion, particularly from Troy.

“I’ve got a vision of a proud Kevin opening his new front door,” he says through tears.

There is an imbalance in the distribution of cash in episode two and, while I’m delighted they walk away with Channel 9’s money, I’m still not comfortable that decent, vulnerable people are asked to lay bare their ethical and moral choices while we (probably using social media) sit in judgment.

Of course it’s all very well for me (and other media types) to hop on my high horse over the show. I’m not in the participants’ vulnerable position and, as Channel 9 points out, 12 people ended up with cash they had only dreamed of. Perhaps it was worthwhile for them.

Regardless, two episodes are enough for me. I won’t be back for a third.

Why watching The Briefcase sickened me