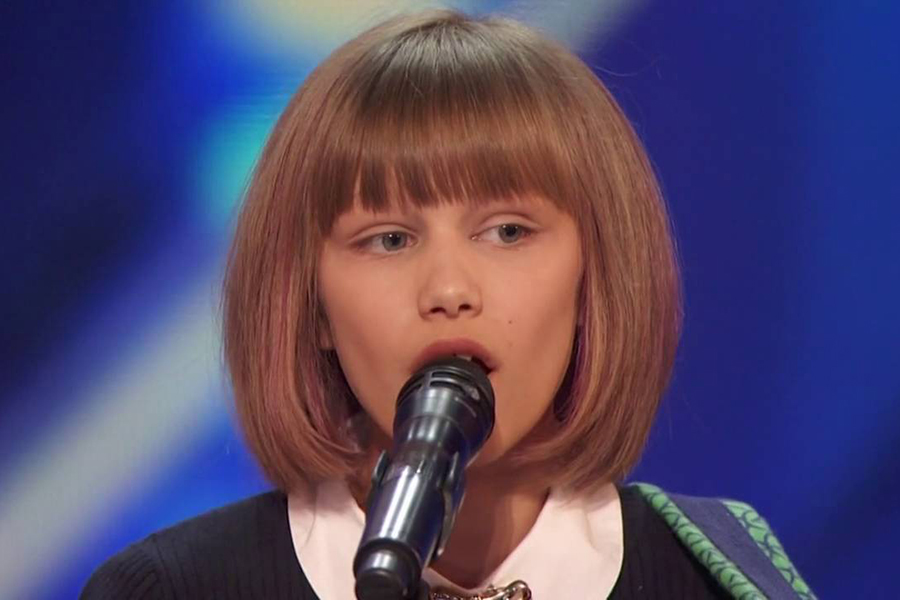 Accompanied only by her ukelele, VanderWaal took to the stage to sing ‘I Don’t Know My Name’, a song she wrote about finding herself through “different phases and styles and friendships”.

• Hear the 13yo who left Simon Cowell speechless
• The Voice Australia: the 10 best blind auditions
• Kerri-Anne: my husband’s ‘minor miracles’

Her voice and the sincere, mature lyrics of her composition left the crowd and judges gobsmacked.

Judge Howie Mandel was so moved by the performance he hit his golden buzzer, a special honour that allows a contestant to proceed straight to the show’s live rounds without having to audition again.

“I think you are a living, beautiful, walking miracle … I think the world is going to know your name,” Mandel said.

VanderWaal, who is from Suffern in New York, was reduced to tears by the high praise from the judges.

“Grace, you know what I predict for you?” fellow judge Simon Cowell said. “I think you are the next Taylor Swift.”

VanderWaal had been posting videos of herself singing covers on YouTube for the past couple of months but did not feel confident sharing her own original songs.

She auditioned for AGT because her mother signed her up without telling her.

In an interview with Rolling Stone, the 12-year-old said the attention she’d received since her audition was overwhelming.

“[The reaction] is very great but it gets kind of confusing,” VanderWaal said.

“I used to sit alone at lunch with only Caroline, and now all these people are coming. I don’t know if they genuinely want to be my friend or they want to be the girl from America’s Got Talent‘s friend.

VanderWaal said the response was almost immediate, with her social media accounts gaining thousands of followers after her audition aired.

As for the Taylor Swift comparisons, VanderWaal is more of a Katy Perry fan but she’s not complaining.

“Hopefully one day I will be as successful as her,” she said.

‘The next Taylor Swift’: 12yo singer stuns onlookers