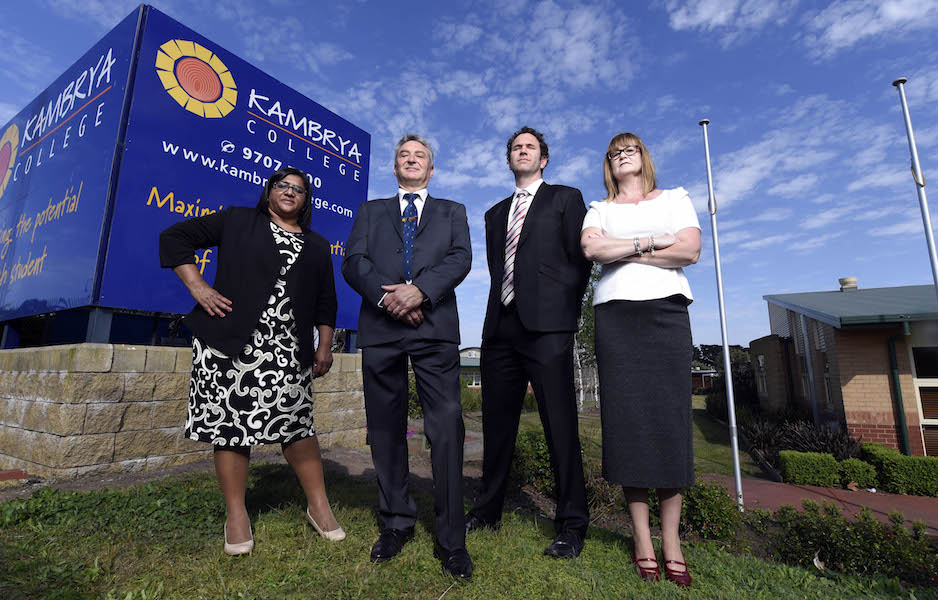 In 2008, Kambrya College in Berwick, Victoria, was marked in the bottom 10 per cent in the state in academic achievement.

“When you are rock bottom,” says Kambrya principal Michael Muscat, “there’s only one way to go.”

ABC’s Revolution School is a four-part observational documentary filmed over the course of a full school year at Kambrya College.

It is a startling insight into the struggles the education system may never shed – the sombre counterpart to Chris Lilley’s mockumentary Summer Heights High.

To a lot of the teachers, students are disrespectful, unruly and ungrateful of their efforts. One female teacher is mocked by a pack of male students after she asks them to stop spitting near her.

To a lot of the students, teachers are distant objects of negatively exercised authority. They don’t understand, or they don’t care.

Conveying the importance of a good education to someone going through puberty can get problematic.

“You go to school for 13 years for some old guy to sign a piece of paper to say that you’re competent in year 12,” one student suggests glumly. His exasperation is reasonable. The system is flawed.

Some of the teachers appear to genuinely want to help their students. A few come off as more concerned with cultivating a certain image for themselves than identifying and considering educational obstacles.

Some issues remain neglected because schools simply don’t have the resources.

One of the female students, Tiarne, threatens a teacher. She was happy and well adjusted in year 7. Now in year 10, she’s one of the most disruptive in her grade. She blames bullying. It’s probably that and more.

Jamin, a boy, is accused of bringing marijuana to school. He denies it, but his teachers find the drugs, a pipe and a grinder in his bag. He hasn’t remained at a single school consistently in years. Jamin’s dad, unable to control him, shifts him off to Lebanon to live with relatives. It’s not a solution.

Another girl, Rachel, is preparing for the transition to year 11 next year. Her grades are strong and she’s one of the most outstanding students in the school, but the pressure is making her miserable.

Kambrya has improved since they hit rock bottom in 2008, having turned to the Melbourne University Graduate School of Education for assistance. But Revolution School shows personality and personal development are just as crucial to education as having an effective system in place.

Not every teacher or parent is working towards the best interests of the children in Revolution School, even when they think they are. The vice-principal appears supportive, but there’s also a sense of self-satisfaction to the way in which he delivers stern lectures. The students aren’t receptive to reprimands.

Revolution School is an effective glimpse of school life, but doesn’t comprehensively examine where and how some students can fall through the cracks.

The individual stories are brief and don’t make much of an impact separately. But they tell a greater story of the uphill battle, fought by parents, teachers and students, of helping adolescents become as good and happy as they can possibly be.

Revolution School airs Tuesdays at 8.30pm on the ABC and is available to stream on iView.

Revolution School: the truth about our education system