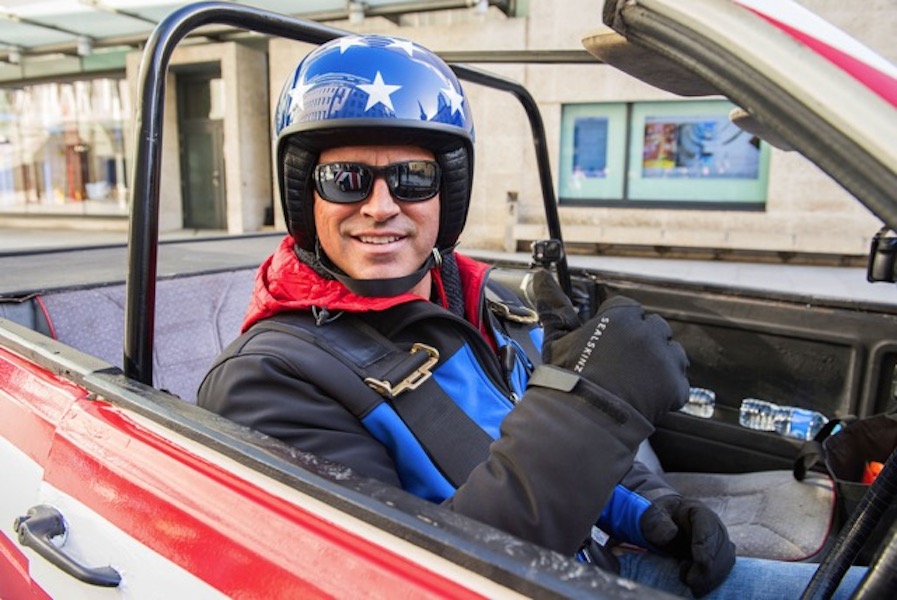 The new Top Gear really started to go downhill 38 minutes in when Matt Le Blanc described a car as “weighing as much as your mother’s G-string” while implying group sex in the back seat.

Until that moment, he’d been my great hope for the show, which debuted in Australia on Foxtel on Monday night. Sure, he was nervous and stilted when he was introduced in the studio but, hey, this is his first outing and he’s an actor, not a broadcaster.

Co-host Chris Evans wasn’t much better. Unlike LeBlanc, he’s no novice – renowned primarily as a radio personality in the UK – but this is the Holy Grail for the BBC. One of its most powerful brands. The pressure is huge.

Here’s the thing. I’ve been in the position (as SBS Executive Producer) of launching a new Top Gear (Top Gear Australia) and I know what a poisoned chalice that is. We knew all our audience wanted to see was Jeremy Clarkson, James May and Richard Hammond.

Of course, we didn’t have them, so we were always going nowhere. For that, my heart went out to the producers of the new Top Gear.

So, I was willing it to work – and, for a while, it looked like it would. After it left the studio, things started to pick up. Chris headed to Top Gun (home to elite pilots in the US) to test the new Dodge Viper ACR. Better still, he raced against German racing driver, Sabine Schmitz, driving a Corvette 206 Vet in a muscle car challenge. She was awesome!

The Stig did his stuff in the Viper for the much-loved Power Lap and I was starting to relax as we headed into the first road trip for Chris and Matt – even if it was to Blackpool (the seaside resort in the north of England and the butt of many jokes) and they were driving Reliant Rialtos, the infamous three-wheeled, British-invented “car”, for the start of the UK v USA challenge.

There was genuine banter between the two guys chatting via headpieces as they drove north. Cars broke down. Matt looked like a bear, rugged up as the weather got worse. I was relaxing and, yes, laughing as they made it (sort of) to the renamed “LeBlancpool”.

But, back in the studio, the show stalled again. Whereas Clarkson just chatted in interviews, Evans’ interview with two quite dull people – chef Gordon Ramsay and actor Jesse Eisenberg – was complicated and contrived. Where’s Matt gone, I asked.

Oh, there he is in the “G-string” car (as I will now think of it), properly called an Ariel Atom Nomad, an off road vehicle he tested somewhere in the desert. Beautifully shot, it was lots of fun for Matt whose charisma shone as he talked cars and drove. But it was followed by a pointless test to see if this was the world’s best all-terrain get away car.

By the home straight, everyone was flagging. On a sunny day, the USA v UK challenge might have continued to work – but the weather was against the team in both Blackpool and the Lake District. And, again, the challenges were not well conceived. Andy Wilman, the show’s original producer, was sadly missed.

Damn and blast I wanted this to work. And, when I compare it to the first episode ever of Top Gear, broadcast in 2002, it did work. But the audience in 2016 isn’t making that comparison – just like they didn’t with Top Gear Australia.

They are still thinking of what it once was, even though Clarkson and co’s ratings had been on the slide, with the final show rating two million less than the seven million it rated at its peak.

The show was only rebooted because it was one of the BBC’s most successful money-earners. But, like the best Blackpool summer’s day, the new Top Gear promised fun, laughter and warmth. The first episode delivered cold, wet and miserable.

Matildas will be keen to forget 7-0 drubbing by Spain
Upcoming stats will reveal where and how hard rates are hitting economy
Victorian MPs pocket a tidy 2.75 per cent pay raise
Reserve Bank review isn’t a ‘get the governor’ exercise: Jim Chalmers
‘Violence for weeks’ feared after landmark US abortion ruling
Aussie Hannah Green within striking distance of Women’s PGA Championship lead
Game of Thrones: a long-lost character returns
Today's Stories