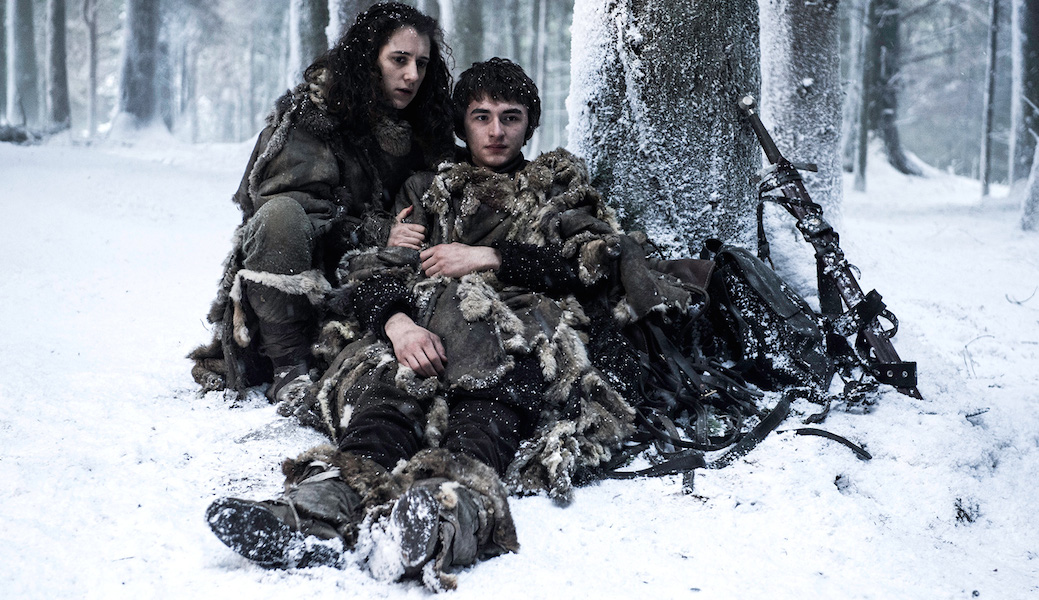 If that hooded figure who rescued Bran and Meera at the start of this week’s episode looked familiar, it’s because we have met him before.

We last saw Benjen Stark, younger brother of Ned Stark, way back in the third episode of season one, when he was First Ranger of the Night’s Watch.

Just after Jon Snow arrived at Castle Black, Benjen set off on a ranging mission beyond the Wall and never returned.

Jon, who idolised his uncle, joined Lord Commander Mormont on a mission beyond the Wall to find Benjen but returned empty handed and Benjen had been missing ever since.

Until, lo and behold, he appeared in the latest episode, ‘Blood of my Blood’, just in time to save Meera and Bran from an army of wights (corpses raised from the dead by the White Walkers).

Bran recognised his missing uncle straight away, but was obviously slightly put off by Benjen’s very pale skin and facial disfiguration.

So why did Benjen look so, well, dead? He explained to Bran that beyond the Wall he had encountered the White Walkers, who had attempted to turn him into one of them.

Thankfully, before their power took hold, the Children of the Forest found him and stabbed him with a shard of dragonglass, halting the magic.

Benjen’s story confirmed a popular fan theory that he is, in fact, a character from the George R.R. Martin books named Coldhands.

In the books, Coldhands is a mysterious figure from beyond the Wall who looks half-dead, wears the Night’s Watch robes and does not breathe or eat.

The show has meddled with Coldhands’ entry slightly. In the books he turns up a lot earlier, leading Bran, Meera, Jojen and Hodor to meet the Three-Eyed Raven. He also rescues Sam and Gilly from the wights.

As we know, DB Weiss and David Benioff have a lot to get through, so this reworking makes perfect sense.

Benjen said he was sent by the Three-Eyed Raven to save Bran, who must now take on the role with little experience. It seems as though Benjen plans to train Bran to use his powers so he’s ready when the Night King comes for him.

Clearly, Benjen has spent a fair amount of time with the Children and the Raven so probably knows his stuff. Given Bran just downloaded the entire history of Westeros into his brain, he needs all the help he can get.

Check mate, High Sparrow. The old man in the robes managed to outsmart the Tyrells and the Lannisters by getting Margaery and Tommen on his side.

This will not end well for either party.

Randyll Tarly was almost worse than Sam made him out to be. We doubt he’ll be happy about his least favourite son stealing the family’s sword, Heartsbane, and going on the run with a Wildling.

On the plus side, now Sam and Gilly have some Valyrian steel for White Walker stabbing. Oh, and Gilly got a Miss Congeniality-style makeover.

Arya Stark is back! And so is her trusty sword, Needle.

We’re glad because that Faceless Men storyline was getting boring and this troupe of drunken, half-naked actors are way more fun.

Walder Frey is furious Riverrun has been reclaimed by Brynden ‘The Blackfish’ Tully, an awesome fighter and potential Stark ally (he’s Catelynn’s uncle).

Unfortunately, if both Jaime Lannister and the Freys take him on, Brynden might be a bit too distracted to help Sansa and Jon reclaim Winterfell.

Ah, the conundrum of Daenerys Targaryen. She’s an easy character to barrack for, but her recent antics have some questioning her “good guy” status.

Her latest rousing speech was borderline power-hungry. After all, this is a woman whose father was nicknamed the “Mad King”.

Importantly, both Dany and her dad featured in Bran’s massive flashback at the start of the episode. Could that be a hint Dany is following in her father’s footsteps?

If so, that’s terrifying. Dany has an army of Unsullied and Dothraki on her side as well as three dragons.

Everybody run for cover.

And for something completely different…

Someone made Brienne and Tormund’s scenes into a trailer for a faux romantic comedy.