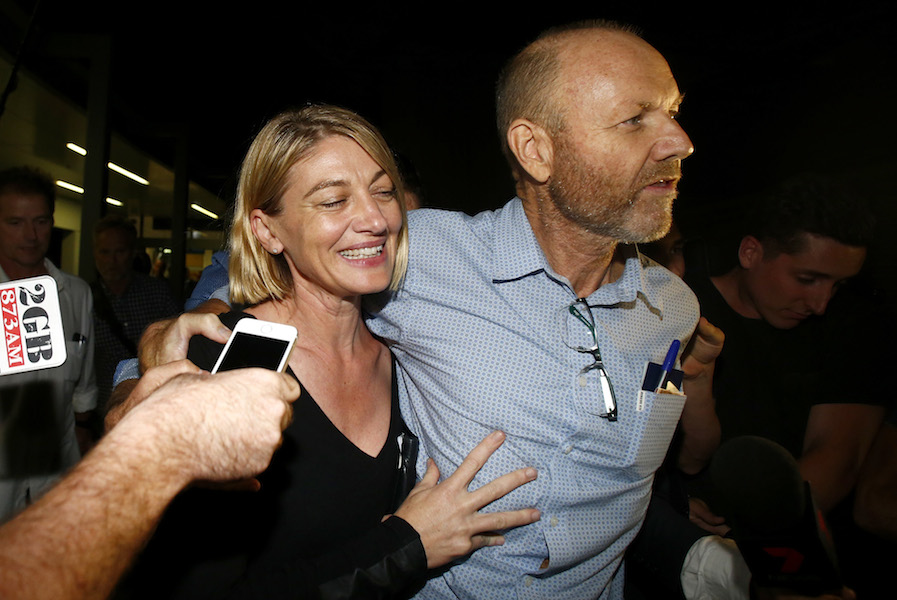 Producer Stephen Rice has been sacked by the Nine Network after an independent review into 60 Minutes’ botched child recovery operation in Lebanon found the story was “the gravest misadventure in the program’s history”.

Journalist Tara Brown and other staff involved were also handed formal warnings for the story that was determined to be “inappropriate” and “at odds with standard procedure”.

The issue will be addressed in a special Beirut: What Went Wrong report to screen on this Sunday’s episode of the popular current affairs program.

The controversial story saw a small Nine crew travel to Beirut in April to cover Brisbane mother Sally Faulkner’s attempts to “recover” her two children from her estranged husband.

But Ms Faulkner and the 60 Minutes crew were arrested by Lebanese authorities on April 7 after the recovery agency was filmed attempting to snatch Ms Faulkner’s two children from the street.

The show’s crew were held in a Beirut prison until civil claims brought by the children’s father, Ali Elamine, were settled.

The review included a five-page report that also contained recommendations. It was conducted by Gerald Stone, the founder and former producer of 60 Minutes.

He was helped by David Hurley, an ex-producer and senior executive at Nine, and the network’s general counsel, Rachel Launders.

When announcing the findings, Mr Stone acknowledged that serious mistakes were made.

“It’s clear from our findings that inexcusable errors were made,” Mr Stone said.

“I still believe, however, that 60 Minutes – lessons learned – can continue to earn the respect and attention of the viewing public for years to come.”

Nine CEO Hugh Marks admitted the network’s decision to pay a significant fee to the child recovery agency Ms Faulkner hired was also out of order.

“The manner in which we produced Sally Faulkner’s story exposed our crew to serious risks, and exposed 60 Minutes and Nine to significant reputational damage,” Mr Marks said.

“We got too close to the story and suffered damaging consequences.

“Amongst other elements of the execution of this story it was inappropriate, and at odds with our standard procedure, for a payment to be made directly by 60 Minutes to the recovery agency that had been independently contracted by Sally Faulkner.

“It was also inappropriate, with the risks involved for our crew, not to have consulted with Nine’s security advisers before the story was finalised.”

Nine said it would review its processes to avoid a repeat of this incident in the future.

“As a result of the review, we are expanding and upgrading our processes related to story selection and approval, how we approve contracts and payments and the way we conduct risk assessments,” Mr Marks added.

“We have an obligation to our staff, our shareholders and our viewers to operate in ways that enhance our reputation as a leading producer of news and current affairs.”

The report revealed that the crew were still receiving “counselling related to the events in Lebanon”.

Chairman of the Nine Entertainment Corporation, Peter Costello said that, because of the report, the board had put in place a “strengthened risk assessment process in addition to enhanced financial controls and delegations”.

He added: “It is the determination of the board to build a robust system of checks of balances to guard against such events occurring in the future.

“Our talented people are the most valuable resource of the company and their safety is our priority.”

The Nine statement also said while settlement had been reached, “the crew potentially faces cases to answer from the Lebanese justice system”.

“Until these matters are clarified, Nine, 60 Minutes and the members of the crew remain limited in what they can say about these events so as not to prejudice any legal proceedings in Lebanon.”

‘A real lack of management’

The host of ABC’s Mediawatch, and former 60 Minutes journalist, Paul Barry told ABC News 24: “There seems to be a real lack of management control.

“I used to work on 60 Minutes years ago and we would rarely know what was going on in the rest of the programme. It was on a need-to-know basis.

“The program had immense power and a lot of things did not get referred upstairs. It didn’t happen in this case.

“A whole bunch of controls that clearly weren’t there in the first place (are now coming in).”

While Mr Barry said the network had cleaned up some of the mess by conducting the review, the fact that child recovery agent Adam Whittington remained in a Lebanon jail was a “continuing publicity problem for Nine”.