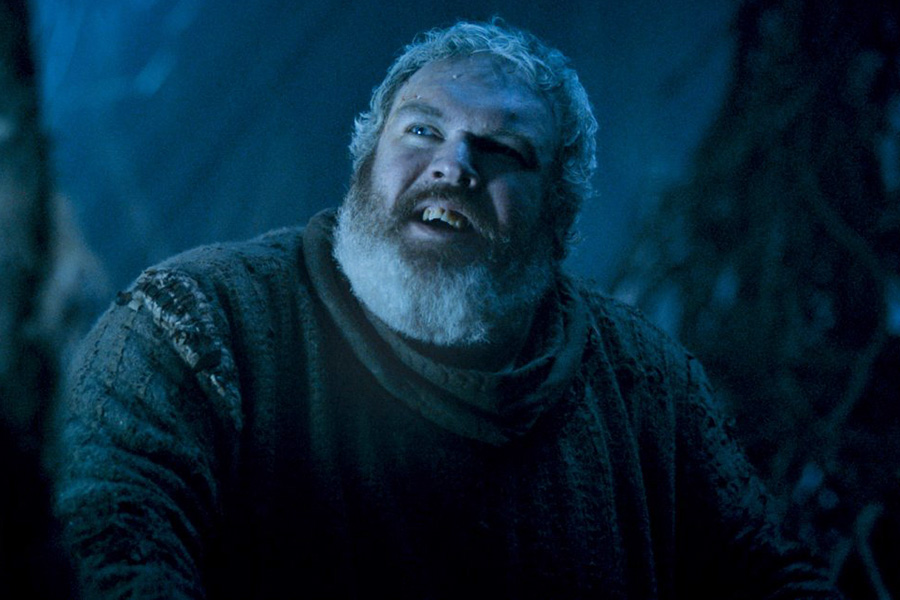 Game of Thrones fans are hardened individuals. We’re used to seeing murder, rape and torture splashed across the screen in horrifying detail.

So it says a lot that a scene featuring none of those things has caused so much sadness.

For five years now, we’ve grown to know and love Hodor as the loyal giant with a limited vocabulary and a heart of gold.

There were many theories as to why he could only utter his name, the most popular being that he warged too many times into his horse.

However, the latest episode of the show – aptly titled ‘The Door’ – gave us the answer no one wanted.

Hodor (birth name Wylis) was the victim of Bran’s fledgling time travel skills, risking his body and his sanity to protect Bran and Meera from the White Walkers by holding the door of the hidden cave shut so they could escape.

How and why this happened is complicated. First, Bran screwed up by travelling through the weirwood tree to see the White Walker army, where the Night’s King spotted him and grabbed his arm.

The mark left by the Night’s King broke the magical barrier protecting the cave from the White Walkers, allowing them to track his location.

We then saw Bran travel to past Winterfell just before the White Walkers arrived at the cave to claim him.

When he heard Meera calling for help from the future, Bran warged into future Hodor while standing mere feet from past Hodor.

Through some weird time travel glitch, past Hodor heard Meera instructing future Hodor to “hold the door”, which he repeated as his body went into a fit.

Future Hodor (played by Irish actor Kristian Nairn) was left stoically holding the door against the savage White Walkers as they clawed at his face and body. It was like watching Bambi die all over again.

This tear-jerking scene told us something important: Bran seemingly has the ability to change the past and the future.

Unfortunately, the Three-Eyed Raven’s premature death leaves Bran with little clue how to use his newfound abilities, something which could have potentially disastrous consequences – Hodor being the first casualty.

Some are even speculating that pretty much every bad thing that’s happened on the show might turn out to be Bran’s fault. Time travel is tricky.

Regardless, it now appears the crippled teenager, absent from all of season five, is now the most important character on the show. Go figure.

The most heroic moment in #GameOfThrones history goes to Hodor pic.twitter.com/K7x8rDWsnd

The other big revelation from ‘The Door’ was that the Children of the Forest created the White Walkers.

Leaf, that nymphish figure who sacrificed herself to protect Bran and Meera, explained to Bran that the Children were desperate to protect their trees during the war with the First Men (the ancestors of modern-day Westerosi people) so they created the Walkers to defend themselves.

This backfired when their creation grew out of control. A popular theory is that the Children were then forced to build The Wall to keep the White Walkers at bay, which would explain why it is impenetrable for the army of the dead.

If this is true, then Bran has the potential to ruin everything.

Why? He now carries the mark of the Night’s King. If he passes through The Wall to find Jon and Sansa, he might also remove the magical barrier placed on The Wall, as he did in the cave.

Then the White Walkers could travel freely through The Wall and into the realms of men.

Game of Thrones delivers its most tragic moment yet