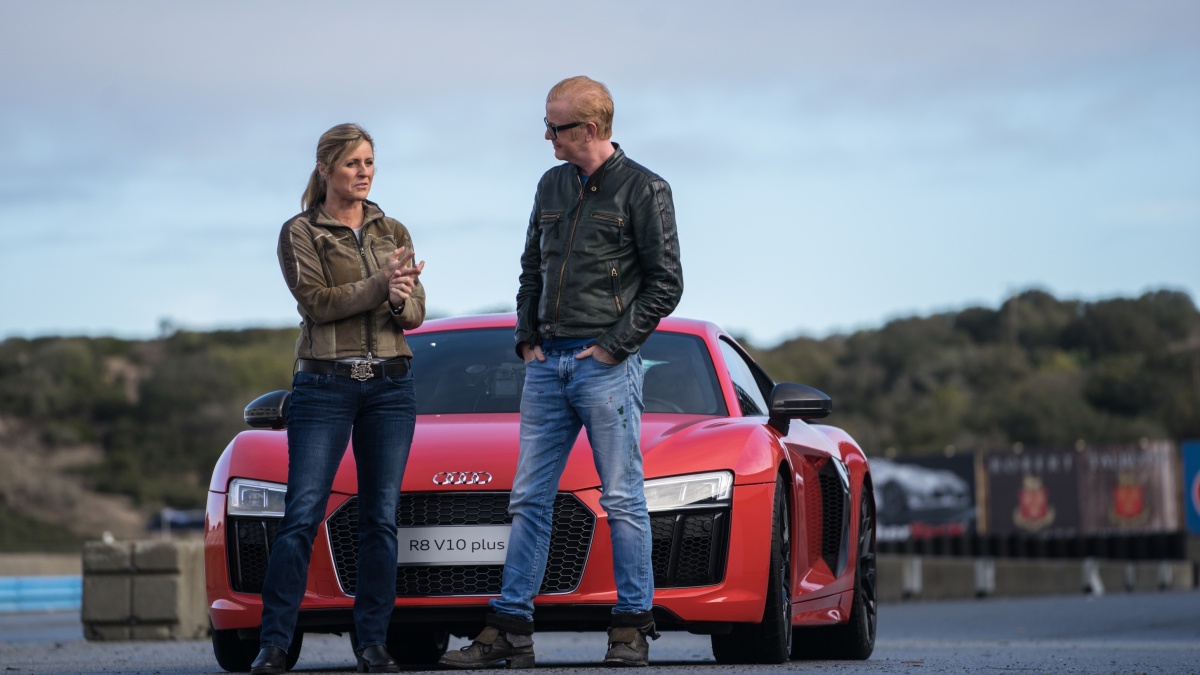 After Jeremy Clarkson’s dramatic exit from Top Gear and the ensuing dissolution of the original BBC stalwart, there’s plenty of pressure for the new series to deliver.

One person who isn’t worried is Sabine Schmitz, the sole female host on the new show, which debuts on BBC Knowledge at the end of May.

This relaxed attitude is possibly due to the fact Schmitz has faced far worse things in her impressive career as a professional motor racing driver than a few bad reviews and some Twitter backlash.

As a woman in a male-dominated industry, the 46-year-old has had her fair share of sexism.

“At the beginning the guys in the race they were quite friendly and they’d say ‘we will help you’ or ‘just follow me in the race’,” Schmitz says.

“The guy who said ‘follow me’, I overtook him on the first corner. Then they started to get upset.”

The below-the-belt tactics weren’t just limited to her competitors.

“I had a team partner who tried to lock me up on the track so that I missed my good time,” Schmitz recalls.

“But I managed all that and I found it kind of funny, so it makes me even faster.”

There has been plenty of speculation about conflict and drama on the set of the new series, with rumours particularly focused on discord between Evans and the rest of the crew.

But Schmitz insists the whispers aren’t true. She also claims the concern surrounding the decision to cast LeBlanc – known more for his acting than his driving skills – is unfounded.

“Matt is really a very good driver, I didn’t expect that,” she says. “You can put him on a motorcycle, in a car, he’s really good. Not bad for an American.”

That’s high praise coming from Schmitz, who earned herself the title of Queen of the Nürburgring for being the first woman to win the annual 24-hour race on the iconic German track.

“There is no track similar to the Nur, it’s the longest and most dangerous track in the world,” Schmitz explains.

“It’s really not easy to survive, especially when the weather changes three times in one lap which happens every day.”

Still, Schmitz hasn’t lost her sense of adventure and has grand plans for her time on the show.

“I saw on the Top Gear live show in South Africa they did bungee jumping in a car. That sounds crazy but that sounds interesting,” Schmitz says.

“Maybe Chris [Evans] can try first and if it works with Chris then I’ll do it. We have another Chris left if something happens with Chris number one.”

As for the ongoing discrimination against women in the car racing industry, the Queen of the Nürburgring is unfazed, especially when it comes to Formula One boss Bernie Ecclestone’s comments that female drivers “wouldn’t be taken seriously”.

“Bernie who?” she says with a laugh. “What rubbish.”

Top Gear returns to BBC Knowledge Monday May 30 at 8.30pm AEST, express from the UK. Watch the trailer below.