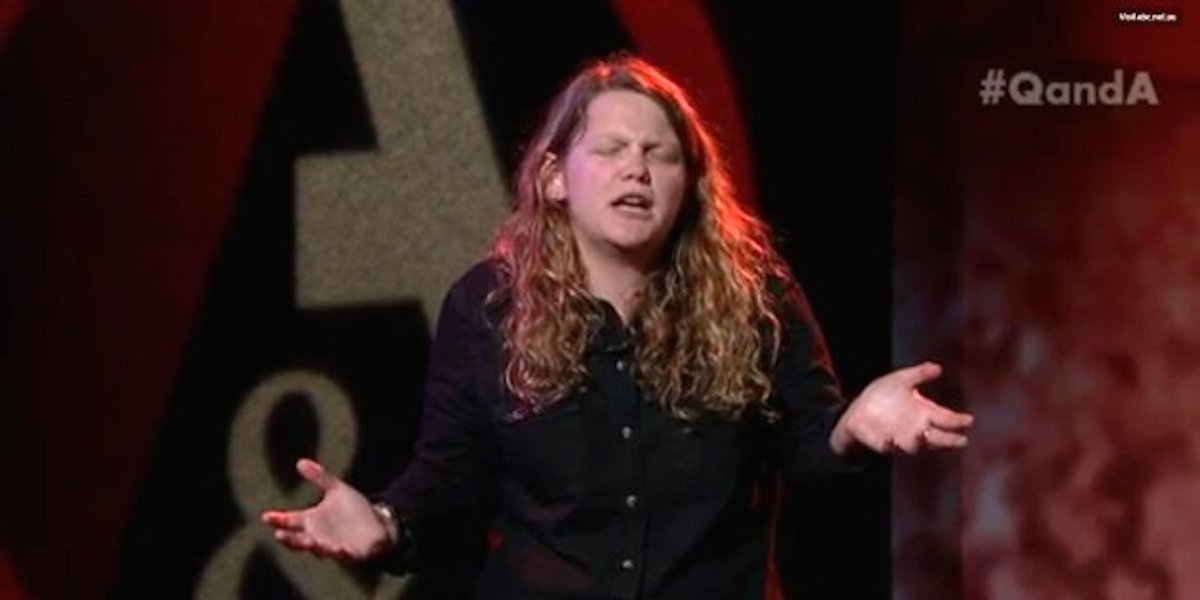 British rapper and poet Kate Tempest garnered the biggest reaction on Monday night’s episode of Q&A for her outspoken views and unabashed honesty.

• Prince Harry lauds Aussie athlete’s courage
• Q&A: ‘Superior virtue of the oppressed’ prevents debate on Islam
• No, News Corp, you are not the victim here

The 30-year-old poet didn’t mince words, emphasising the insignificance of a panel show in the context of the greater world.

“We are in a state of war right now it just so happens that I can happily travel safely to the other side of the world to participate in a f***ing panel show, which just goes to show the barbarity of the inequalities that we live under,” Tempest said.

Later, she described the show’s discussion as useless “nonsense” in the face of the “barbarity” and “greed” of the “neoliberal regime of capitalism”.

“All this is actually nonsense, because there’s something bigger at stake and it’s happening to somebody right now,” Tempest said.

“We can spot barbarity in other cultures and in our past but when it’s in our midst we find it harder to accept and own up to it. We are in the middle of a barbarous time and greed is at the root of it.”

Tempest then took to the stage to perform her poem Progress, which came with a “strong language” warning from Tony Jones.

In the poem, Tempest explored a world post religion, encouraging a torrent of tweets praising her for her “truth and wisdom”.

“They used to burn women who had epileptic fits, they’d tie you to a stake and they’d proclaim you a witch,” Tempest recited.

“Now they’ll put you on the screen if you’ve got nice t*ts but you will be torn apart if you let yourself slip, and they’ll draw red rings around your saggy bits.”

Kate Tempest calls the intellectual elite panelists out on Q&A as participating in a brainfest while Rome burns.
I’m hooked.
Babe you rock.

What a truly amazing person, thinker and artist @katetempest is. #qanda

Of course, not everyone was impressed by Tempest’s performance, with some describing it as “bad rapping” and “verbal diarrhoea”.