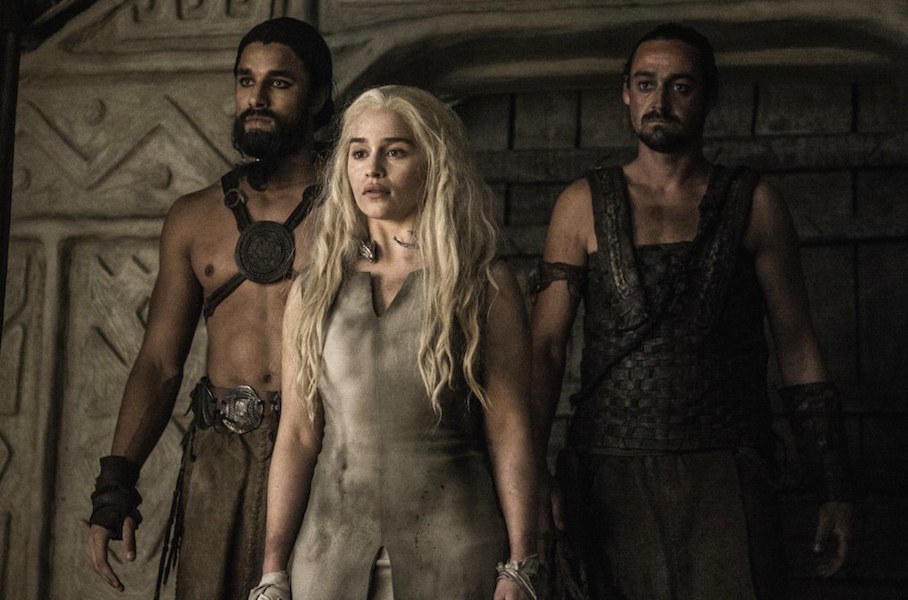 DB Weiss and David Benioff made one thing clear in this week’s episode: this is no longer George R.R. Martin’s Westeros.

Compared to last week’s dog baby feast, the ‘Book of the Stranger’ episode was positively upbeat, with plenty to celebrate. Martin would not approve.

Even better, all sorts of cool alliances are emerging, hinting at a multi-kingdom war of epic proportions.

Then again, we did see the death of a highly likeable character (Osha) and some very sad Tyrells (Margaery and Loras).

The Starks + The Arryns + The Wildlings vs The Freys + The Boltons

Ah, that sweet Stark reunion. Although Jon Snow is likely the son of Lyanna Stark and Rhaegar Targaryen, it was still very emotional to see these siblings (*cousins) reunited.

After pleasantries were exchanged, it was down to business with Sansa urging a subdued Jon to reclaim Winterfell.

Jon already has the Night’s Watch and the Wildlings on-side and, as Sansa points out, the loyal families of the North would leap to his defence.

What the Stark siblings don’t know is they’ve got more potential manpower in the knights of the Vale, who are heading to rescue Sansa on the instruction of Lord Robin Arryn, via Littlefinger.

Another important development at The Wall was the blossoming romance between Tormund and Brienne.

Okay, maybe Brienne isn’t that into it, but she’ll come around. #PowerCouple.

Tyrion + The Unsullied vs The Masters + The Sons of the Harpy

In Meereen, Tyrion is working towards his first Nobel Peace Prize.

While Grey Worm and Missandei have their doubts, Tyrion is well versed in stubborn, cruel-hearted rich old guys thanks to Tywin.

Could his plan to scratch the slavers’ backs in order to bring down the Sons of the Harpy pay off?

The Lannisters + The Tyrells vs The Sparrows

Margaery Tyrell is languishing in prison (but somehow still looks good) while her brother Loras crumbles.

In an effort to bust her grandkids out, Olenna Tyrell agrees to team up with the Lannisters – an unexpected but powerful partnership.

Click the owl for a spoiler about Margaery and Loras’ fate.

Khaleesi vs The plotline

The most memorable image from Monday’s episode was that of a triumphant Daenerys emerging from a temple of burning Khals as the Dothraki bow before her.

This is another departure from Martin’s books. “Targaryens are not immune to fire! The birth of Dany’s dragons was unique, magical, wondrous, a miracle,” he said in a 1999 interview.

Whilst Dany’s Carrie moment felt satisfactory, she’s right back where she started.

When Dany first went to Slaver’s Bay, she told Jorah it was for leadership practice: “Why should I control the Seven Kingdoms if I can’t control Slaver’s Bay?”

She wants to go to King’s Landing to reclaim her father’s throne, but instead she’s stuck in Meereen due to Martin’s self-described ‘Meereenese Knot‘.

A bunch of key characters have ended up in Meereen with no clear way out. If Dany and Tyrion fail to liberate Slaver’s Bay, she won’t have much motivation to go to King’s Landing, leaving us with a stalemate.

Bran + The Three-Eyed Raven vs The White Walkers

In the episode five preview, Bran comes face to face with the White Walkers and their creepy leader, The Night’s King.

Given Bran is standing up in the clip, we can assume it’s a vision. However, the King seems to be looking right at him. Can he sense Bran’s presence?

We all know the King is fixated on Jon Snow, based on their brief encounter at the Battle of Hardhome. There are plenty of theories as to why he finds Jon so fascinating – including that he has Stark blood. Perhaps an encounter with Bran will reveal more.

Things are really heating up on Game of Thrones