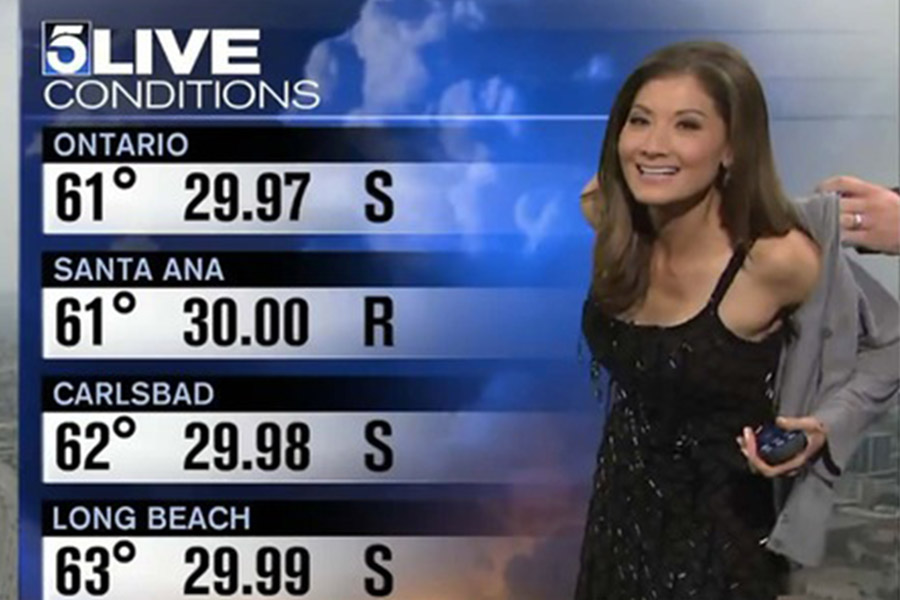 An American television station has courted controversy for making its resident meteorologist put on a cardigan after some viewers complained her outfit was “too revealing”.

Burrous handed a bemused Chan a grey cardigan mid-broadcast, revealing the station had received many objections.

“What’s going on? You want me to put this on,” Chan asked as she put the cardigan on. “Why? Because it’s cold?”

“We’re getting a lot of emails,” Burrous responded.

“I look like a librarian now,” Chan shot back.

The seasoned meteorologist had not initially intended to wear the black dress but was forced to change when she realised her original outfit clashed with the green screen.

“Even if it’s early in the AM, can’t beat a black beaded dress,” Chan tweeted before going to air.

Later, she posted the cardigan video to her Facebook page, asking for her followers’ opinions on the incident.

“Apparently, some viewers think my dress is too revealing … your thoughts?” Chan captioned the video.

The majority of people thought KTLA’s reaction was over-the-top and vaguely sexist, describing Chan’s dress as “beautiful” and “classy”.

However, some argued there was “a time and a place” for evening wear and Chan’s look was “unprofessional”.

“Liberte Chan looks like she stayed out late at a party and came to work in the same dress. Not appropriate for a morning news weather report. The show’s producer should not have allowed her to do it in a cocktail dress. Handing her the sweater during her report was also in very poor taste,” one viewer said.

Regardless, the incident spread like wildfire online, with social media users nicknaming it #SweaterGate.

This isn’t the first time Chan’s clothing choices have gone viral. In February this year she was forced to wear Burrous’ suit jacket when her dress began blending into the green screen behind her.

“Who knew that sea foam green wouldn’t work on the weather wall?” Chan posted on Facebook. “Oops … good thing I brought another dress. Thanks for stepping in to help Chris Burrous.”

After the #SweaterGate incident, Chan returned to air on Sunday in a sleeveless purple dress with no cardigan in sight.

Of course, there is a chance #SweaterGate was a cleverly crafted bid for publicity by the Los Angeles-based station given Chan’s past wardrobe malfunctions. She also seemed more than happy to keep the conversation going on social media by asking for viewer opinions.

If it was a stunt, it worked a treat.

Meteorologist forced to cover up live on air