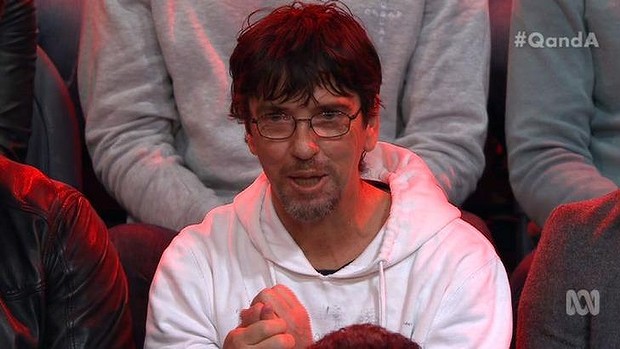 A crowdfunding campaign to “buy Duncan Storrar a toaster” has blown past its original goal of $6000 after the Aussie battler became a social media sensation following his appearance on Q&A on Monday night.

His question regarding the budget lifting the tax threshold over $80,000 raised mixed responses from panel members, particularly from Assistant Treasurer and Small Business Minister Kelly O’Dwyer.

“I’ve got a disability and a low education, that means I’ve spent my whole life working for minimum wage. You’re going to lift the tax-free threshold for rich people,” Mr Storrar directed to the panel.

“If you lift my tax-free threshold, that changes my life. That means that I get to say to my little girls, ‘Daddy’s not broke this weekend, we can go to the pictures’.

“Rich people don’t even notice their tax-free threshold lift. Why don’t I get it? Why do they get it?”

During Ms O’Dwyer’s response she used the example of company tax cuts which would help businesses improve – like a $6000 toaster for a cafe.

“We have a company tax cut with small business with a turnover of $2 million and $20 million … it creates more jobs,” she said.

“One of the cafe owners I spoke to the other day has got a turnover of just over $2 million. As a result of our change … he will have access to the instant asset write-off, which means he can invest in his business, a $6000 toaster.

“[It] means he can get more customers through his business on a Saturday, when there’s a bottleneck … ’cause toast is that bottleneck he needs to clear in order get more people in.”

There was an outpouring of support on social media with tweets including the hashtag #IstandwithDuncan and #DuncanforPM.

The Buy Duncan Storrar a Toaster crowdfunding campaign on GoFundMe was created by user Samuel Slammer Fawcett on Tuesday with a goal of $6000.

“Hey – Duncan seems like a good bloke and every little bit of cash goes a long way,” the campaign states.

“We reckon he deserves a bit of a helping hand so we’ve decided to buy him a new toaster.

“6 grand oughtta (sic) cover it. And if he has a little bit left over, maybe he can take his kids to the movies or something.”

Late on Tuesday night Mr Fawcett shared a campaign update: “Hey toaster lovers. Grab yourselves a piece of toast and watch this tick over 6K! By the time you read this we will probably have hit the goal.”

Over $39k raised via crowdfunding for Q&A ‘battler’