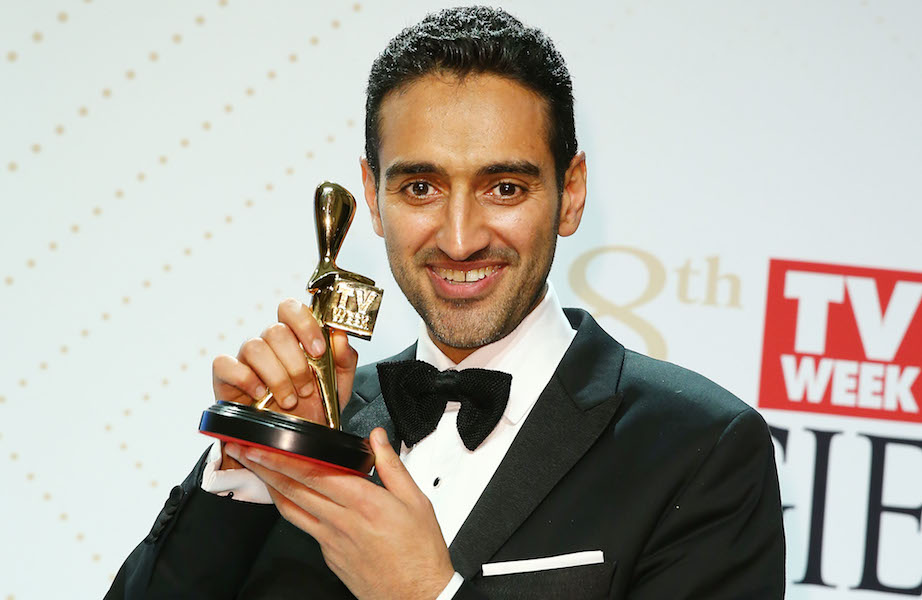 Ten years ago, Waleed Aly stepped on stage to accept a gong on behalf of another TV panel show, one that looked at the world from an Australian Muslim perspective.

Salam Café, which he co-hosted, won Programme of the Year in the Antenna Awards, which recognised the best in Australian community television.

On Sunday night, on a far glitzier stage and as part of his Gold Logie speech, Waleed said his wife Susan Carland was “wittier” and “sharper” than he was.

She proved that 10 years ago when, as a performer on Salam Café, she waved the spiky trophy around, joking that no Muslim would ever be allowed on a plane with that in their luggage.

Waleed, meanwhile, did the far more serious thank you speech, albeit with his trademark smile and warmth.

The Project host may be new to a commercial television audience, but in fact he’s been around for years.

Amazingly, while he’s undoubtedly become more skilled at what he does, it seems to me he hasn’t changed at all.

Whether some Australians like it or not, he’s a Dinky Di Aussie boy – whose Egyptian Sunni Muslim parents did their damnedest to ensure he would not be an outcast as he grew up.

A couple of weeks ago I was sitting in the outer at the MCG when Richmond played Melbourne and I saw passionate Tigers fan Waleed bound up the steps with his mates to even worse seats than we had. Just like any other fan.

He was just as down to earth when I worked with him at SBS in 2008 when Salam Café moved there for 10 episodes, following its run on Channel 31.

To be honest, it was all a bit shambolic – despite the best efforts of both the on air and production teams – as you would expect the move from the freedom of Community TV would be, because the on-air performers had “day jobs” outside of the show.

I remember working with the team to further develop the format. Waleed stood out, even then, for his passion to learn television processes. As I recall, he was keen to put the work in to ensure the show was the best it could be – ensuring rundowns and script were delivered on time to the show’s producers.

And he was much more than just co-host. He was a conduit into the Muslim community, wrangled the talented team, was highly professional and a delight to work with.

In the years since, he has done so much it’s hard to know where to start. He’s a lawyer, has presented various ABC radio and TV programmes, lectured in politics, written a book, done sporting analysis (including advising the AFL), written for newspapers and is a spokesperson for the Muslim community.

His inclusion in The Project team just over a year ago surprised me because, based on his career to date, I had thought of him as being “public broadcasting” rather than “commercial TV”. How wrong I was.

It was a stroke of genius from both Channel 10 and the producers. He has brought a gravitas to the show and is a great counterpoint to Carrie Bickmore and Pete Helliar.

And, he would never have won the audience-voted Gold Logie if he hadn’t made the move, given that the ABC’s last recipient I could find was Norman Gunston 40 years ago!

But what of Waleed’s future?

At 37, he’s really only just crossed the threshold into an even more outstanding media career.

He’s found an excellent parking space on The Project. I like his biting editorials and his legal training shows in his interviews.

So, will he stay in the media or head for different pastures, perhaps political? I look to London, which has just elected its first Muslim mayor in Sadiq Khan.

Personally, I hope he stays doing what he’s doing for as long as he can because it’s talented people like him who are our best hope for a truly representative Australian media.

Despite what the social media trolls would have you believe.

Waleed’s Logies win was 10 years in the making