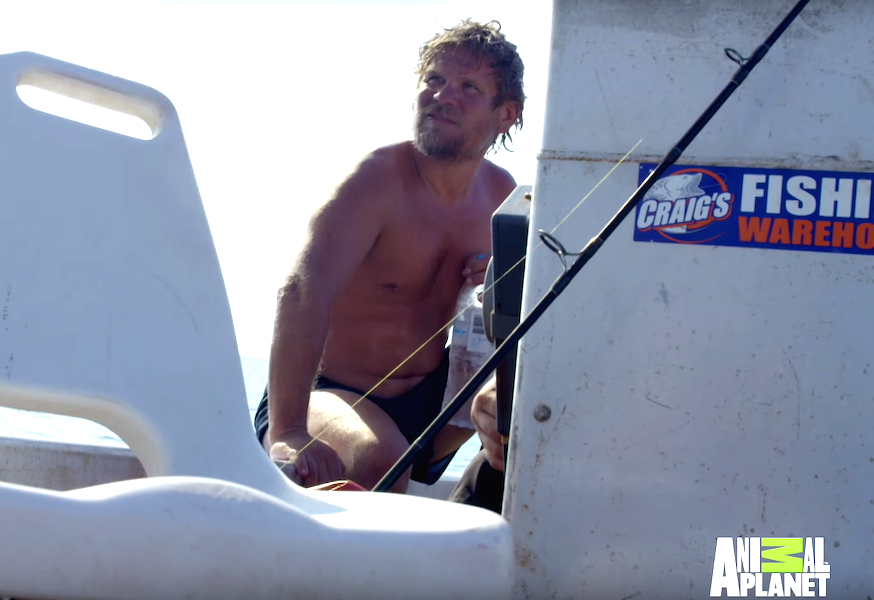 The cast and crew of British wildlife series River Monsters are used to strange beasts, but they’re not as accustomed to encountering strange men, especially in the uninhabited areas they frequent.

Host Jeremy Wade and his producers and cameramen were filming near the remote Barranyi North Island, 750km south-east of Darwin, when they saw something Wade said “stopped us in our tracks”.

In the Northern Territory to search for the giant grouper fish, they instead stumbled upon a real-life castaway in desperate need of saving.

“We first of all saw a [water] cooler on the rocks and then one of us spotted … somebody there,” Wade explains in the episode, which was filmed in November 2015 but went to air in the United States on the Animal Planet channel last week.

In the episode, one crew member can be heard saying, “we probably want to get water out for the guy”, as the camera pans to a dishevelled, sunburnt man floating in the water and clinging to an esky.

The man, a roofer from Borroloola later identified only as Tremine, had been separated from his boat during a fishing trip and was clinging to life after two days in 42-degree heat.

“One more day on the beach and he would have died,” Wade explains to the camera.

“No I came around here … because I seen [sic] turtle nests and heaps of empty bottles, so I was hoping that one of the bottles might have a bit of water in it,” a disoriented Tremine can be seen saying to the crew in the episode.

Thankfully, Wade and his team arrived just in time and Tremine spent the night with them before returning home and making a full recovery.

“He had said his last prayer,” Stephen Shearman, the director of the episode, told Inside Edition this week. “He was prepared to die and meet his maker.

“He had tried to walk back, got beaten by the sun, and made his way back to the beach.

“Meanwhile, he had suffered from sunstroke and was unable to go any further. He then spent that first night on the beach, and the next morning he tried again, but the sun had gotten to be too much for him, and at this point, he is now trapped.”

The encounter was particularly fortuitous given the River Monsters team hadn’t originally intended to shoot at that end of the island, but were forced to move due to choppy waters at their original location.

Tremine had no family or children so no one noticed his absence immediately. One of the River Monsters crew’s guides, a man named Ashley, actually knew Tremine and said he often went away on fishing trips with little communication.

Shearman explained to Inside Edition that, despite the sunstroke and dehydration, the biggest hit Tremine took was to his ego.

“I don’t know if you’ve met Australian men, but they’re very proud,” Shearman explained. “The idea that he’d gotten lost was mortifying for him.”

The New Daily has sought comment from Animal Planet.