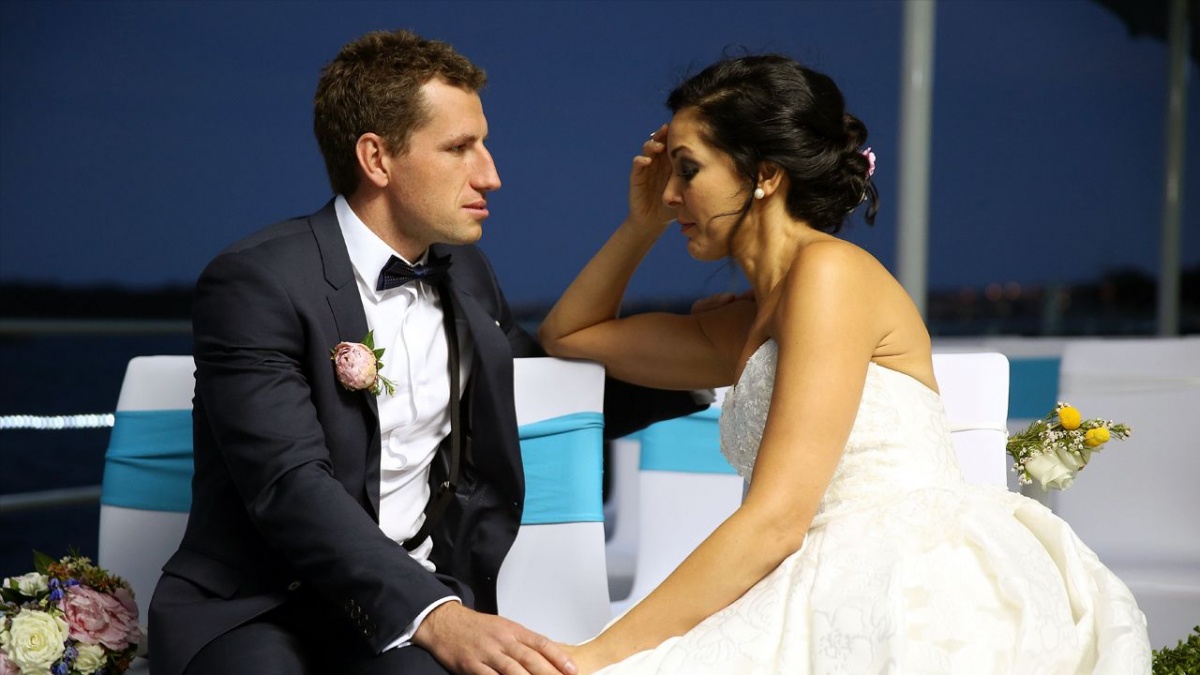 Welcome back to Married At First Sight, the show that gives to romance what the bedazzler gives to fashion.

First a visit with a couple from last year. Zoe and Alex are now a case study in how two people brought together by a reality television show can be a success, as long as they’re the sort of people who will put the dishwasher in the laundry unless someone tells them not to.

Cut to: A girl crying. And swearing. In the back of a limo.

Let’s hit the lab. John Aiken is a psychologist who knows one in three Australian marriages end in divorce, while three out of three television experts have sold out completely.

Dr Trisha Stratford is a neuroscientist who asks candidates to identify what smells they are looking for in a partner. By getting them to bury their noses in actual samples of each other’s sweat.

How is this not an app?

Finally, psychologist Mel Schilling explains “we used the science to bring the couples together”.

So who have the science, the smell test and the sellout paired up?

Christie, 39, is a professional DJ who wants babies. She is single because “I can be a bit passionate sometimes” which isn’t as veiled a metaphor for “psycho hosebeast” as she’s hoping.

She is paired with Mark, 36, who has tossed in fly-in fly-out work on the mines after 11 years to literally buy the farm. So he’s after a biped who isn’t covered in coal.

Then there is our wedding weeper Erin who is 25 and “an online dating fiend”. It’s not clear at first if this is her actual profession.

Her match is Bryce, 31, a business analyst who has been in love before. The scientists tell us that Erin likes Bryce’s smell. Which is lucky as his personality apparently consists of drinking alone by a river.

In rural Victoria, Erin and Bryce’s day is threatened first by a cyclone warning and then by Erin’s failing comprehension of the existence of non-city.

Upon arriving, Erin pops out of the car, to announce she is feeling “shit scared” and “utterly insane” before heading back to the limo for a glass of champagne and a quick panic attack. Thankfully due to the power of post-production voiceover we can hear every thought she screams.

Soon, as per every little girl’s dream wedding, she stumbles into the ceremony and with a half-mumbled “oh f***” sets off down the aisle.

The harbour wedding on the other hand has choppy seas and the sort of musical crescendo normally reserved for gargantuan monsters emerging from ocean depths.

Christie feels no chemistry. Had Mark been online she would have swiped left. This makes her vow of “I do … to the best I can” seem generous.

She’s not one to let lingering doubts interfere with a sham ceremony.

Christie next gets photographic reminders of that time she looked like a kidnap victim, before descending into the sort of full-blown nausea normally reserved for the audience of this show. Mark’s sure its seasickness. Bless.

Scientist John Aiken acknowledges that intimacy on the wedding night will have to be negotiated. For Mark and Christie that involves pillows down the middle of the bed. Which he is TOTALLY FINE WITH OK?

By contrast, when the classiest of Erin’s friends asks “are you going to f*** him?” (twice, with helpful subtitles), Erin’s response of “it’s not off the table” is not subtitled. Or subtle.

Monday night’s final shot is Erin banishing the camera from their hotel room to comply with classification standards. Forget romance, this show is all about the science