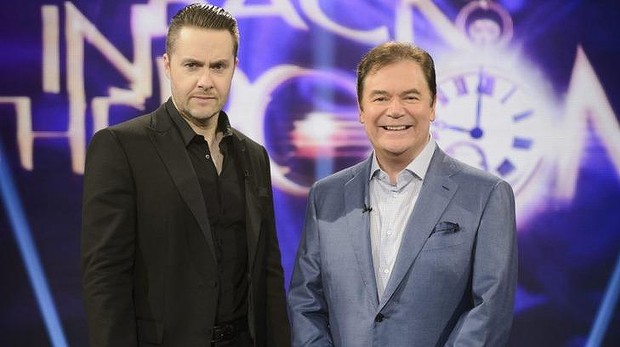 You’re Back In The Room is like some surreal practical joke you can’t quite believe isn’t intentional. Its existence that is. The “jokes” within the show are clearly intentional, they’re just not funny.

“Famed” Irish hypnotist Keith Barry plants suggestions in the minds of four mugs who then participate in a series of simple games.

The hypnotic schticks are the kind you’ve seen hundreds of times before – be Elvis, dance badly, believe you’re naked.

• Lee Lin Chin, The Project co-hosts battle for gold
• Is this the best – or worst – advert in history?
• The new TV show that nabbed two big movie stars

The host is Daryl Somers who we’ve seen more times than we can remember.

And it’s all watched by a studio audience who have apparently never seen any form of entertainment. Ever.

Rehashing so many stale ideas – and hosts – from television of yesteryear, the show is such a blindingly clear metaphor for the state of television in Australia it feels like it might actually be brilliant were it actually some sort of performance art PhD thesis.

But it’s not. This is family entertainment that hope Australian families are desperate for a show that fails to stimulate each member of the family equally.

In short, Nine have re-commissioned mid-noughties TV event The National IQ Test, with just one question: Is Australia dumb enough to buy this particular brand of bull dust? Because in a world where cat videos can be ratings gold, maybe this is the next hit.

It won’t be. My five-year-old was dancing, but then fell asleep. My cat was hiding his head. I was contemplating whether critiquing this show was really a form of animal cruelty.

Four mugs are “freed of their inhibitions” yet manage to not only conveniently never talk over each other, but in the age of Big Brother households, celebrity jungle sleepovers and daily sports star scandals, the actions they are liberated to engage in feel like a bad hen’s night activity.

Does anyone face a fear? Is anyone’s reputation or career maligned? No. The most dangerous thing that might happen on this television show is Daryl getting paint on his suit.

Is Daryl ever hypnotised? No.

Does the notional competition for cash add any drama? No.

How much of this is real? We don’t care.

Hypnosis, like a Jedi mind trick, only works on “weak minded fools”. At least that’s the perception of the ranks of disbelievers, which one suspects have grown by the handful of people watching.

The problem with You’re Back In The Room is it doesn’t make the participants look silly enough, which means we the audience are meant to have the weak and forgetful minds.

Well here’s a mental note for Nine: These are not the droids we’re looking for.